Third Sector has analysed the latest accounts of seven of the largest disability charities to see how they have fared since 2015/16. What emerges is a sector that has slimmed down, scaling back on staffing levels and spending on charitable activity. Andy Ricketts reports

The UK’s largest disability charities have faced a perfect storm in recent years, having to contend with both a drop in public sector spending on services for disabled people and an increasingly challenging fundraising environment.

But just how badly have they been affected? Third Sector has examined the latest accounts of seven of the major disability charities to establish how their fortunes have changed compared with 2015/16. 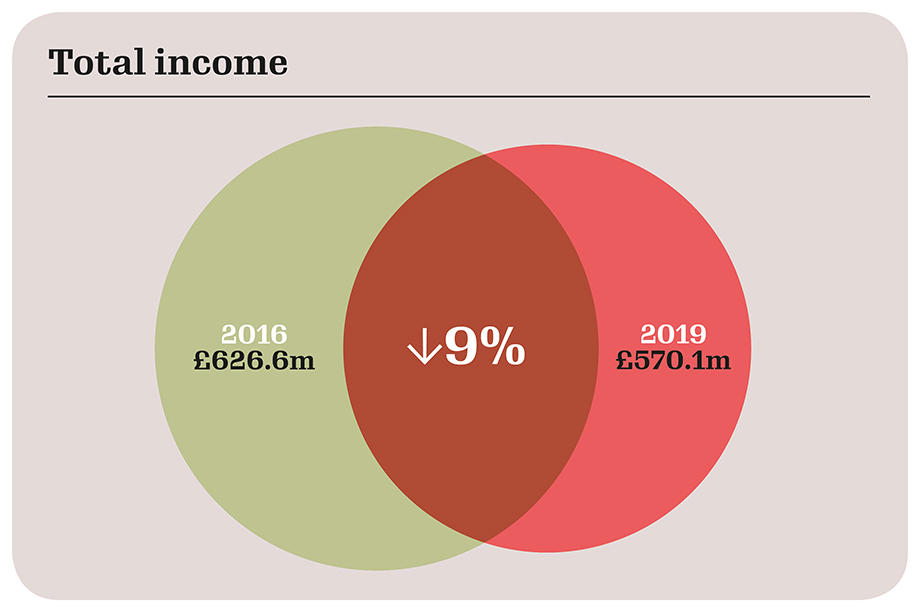 The fall in income can be attributed in part to major organisational changes at some of the charities. In 2018, Scope moved away from providing regulated and daycare services for disabled people, transferring the services to a private sector provider and refocusing strategically on its campaigning role. As a result, its income fell from £94.6m in 2017/18 to £54.6m in the following year.

The disability support charity Sense also went through considerable change after separating out Sense Scotland. The move was completed in May 2018 and resulted in Sense’s annual income falling by £22m and the loss of about 1,000 employees.

But even when these factors are taken into account, the overall picture is one of a sector that is shrinking as the public sector austerity measures continue to bite.

Guide Dogs was the only charity among the group to significantly increase its income, seeing it rise by almost £11m to £117.7m in the year to December 2018 compared with the same period in 2015.

Notably, the charity has significantly increased its spending on fundraising, spending £39.5m in 2018, £4.2m more than it did in 2015. The rise reinforces the argument that the more a charity spends on fundraising, the more money it is likely to generate.

James Hambro, chair of Guide Dogs, says in his introduction to the charity’s latest accounts: "Political uncertainty and an unpredictable economy are putting extra pressure on the charitable sector. Competition for donations remains high while demands on charities show no sign of decreasing." But the charity’s fundraising "performed well in 2018", the accounts go on to say. But the charity hopes to reboot its fundraising. Its latest accounts say it has launched a new strategy that it hopes will lead to a 29 per cent increase in fundraising over the next five years.

Like many emotive causes, disability charities have traditionally done well in the area of legacy donations. Third Sector analysis shows that trend continuing: income from legacies increased to £114.1m from £108.9m since 2015/16. The RNIB did particularly well, generating £41.4m from legacies in 2018/19, £4m more than in 2015/16.

To cope with the overall decline in income, disability charities have been cutting their cloth accordingly. Overall expenditure among the seven charities fell to £561m, a fall of £57.2m or 9.3 per cent.

Third Sector analysed the accounts of Action on Hearing Loss, Guide Dogs, Leonard Cheshire, the National Deaf Children’s Society, the RNIB, Scope and Sense. All of the charities’ most recent accounts have been filed in recent weeks and relate to the year to 31 March 2019, except those for Guide Dogs, which are for the year to 31 December 2018.

They have also become less generous with spending on charitable activities. Total spending on charitable activities by the seven charities was £459.6m, a fall of £40m since 2015/16. Much of this decline can be attributed to Scope moving away from regulated services, resulting in it spending £34.4m less in 2018/19 than in 2015/16. However, the RNIB also spent £24.4m less in this area over the same period.

Leonard Cheshire did buck the trend, however. The health and welfare charity increased spending on charitable activities by £10.3m over the period to £164.3m as it implemented a new strategy that it hoped would dramatically increase the number of disabled people it supports.

As income has fallen and spending declined, it is no surprise to find that disability charities have reduced their headcounts as well. Our analysis shows that the seven charities collectively employed 11,800 staff, a fall of about 4,000 over the past four years.

Much of this can be attributed to Scope’s workforce falling by about 2,500 after the decision to sell off its regulated care services, as well as Sense splitting out its Scottish operations. But the overall picture indicates a sector that is rationalising because of austerity.

Money in the bank

Perhaps surprisingly, total free reserves across the charities increased by 25 per cent since 2015/16 to £189.2m.

A lot of this can be attributed to funds banked by Scope after the sale of its regulated and daycare services and its former London headquarters. These resulted in its reserves increasing from £6.5m in 2015/16 to £32.3m at the end of March 2019. 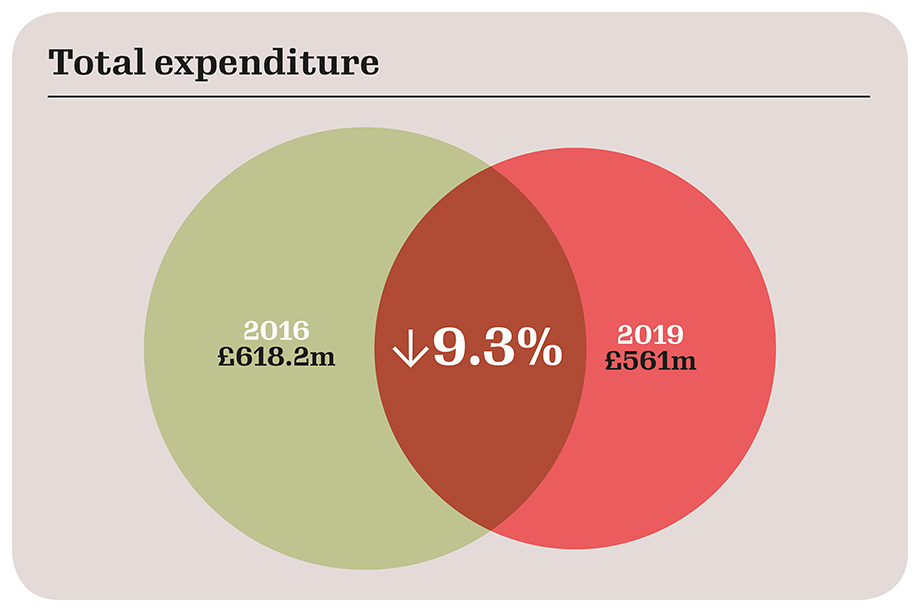