Ross Barry, director of LMB & Co and president of the Textile Recycling Association, describes a simple way for charities to raise more money

This is a sponsored feature provided by LMB Textile Recycling

The great British public has always been more than happy to donate old clothing to local charity shops or textile bins, continuing the old Blitz spirit long after the war; and they often believe all their donated items will be sold in store.

In reality, the charity shops have been selling up to 90 per cent of donations through the back door to the rag man, providing them with a steady and reliable income. The chart below shows how this market has thrived over the past ten years.

The rise in the value of donated clothing can be attributed to the opening up of trade with eastern Europe; before that, nearly all of it was sold to Africa, which – unsurprisingly – wanted only lightweight summer goods. Eastern Europe takes a wider mix of clothing and is able to offer higher rates. UK clothing is highly desirable because it is more fashionable than other European countries – as a result, it has historically attracted a 30 per cent premium. 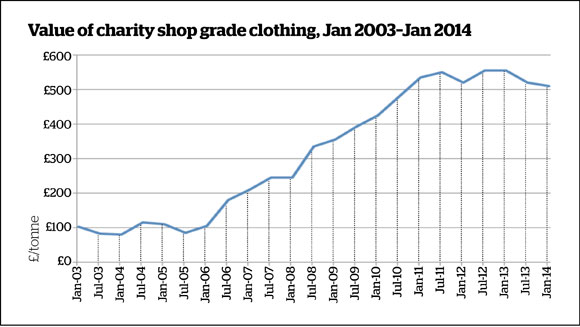 When clothing is such a great fundraiser, it is little wonder that every UK high street is awash with charity shops. However, the market is dominated by a handful of big players, who have also managed to secure the best sites for textile banks. This has often led many fundraisers to overlook clothing donations as a source of income.

Over the past five years, people’s buying habits have changed considerably: we’ve watched Mary Portas try to breathe life into the Great British high street, but the combination of shopping centres and online shopping is a tough one to beat. If the public isn’t going to the high street to shop, why would the public make a special trip to donate unwanted clothes to a charity shop or bin?

This observation is backed up by the Waste & Resources Action Programme, an independent not-for-profit organisation that says more than 300,000 tonnes of clothing go into landfill each year. The value of this to the charity sector could be more than £100m – on top of the £400m already benefiting the UK charity and recycling sector.

So how do we unlock this value? Clothes are a commodity that every member and supporter has in abundance – it is believed that each UK household has 50 garments that haven't been worn in more than a year. Little of the public’s clothing is so damaged and worn out that it wouldn’t have a value to someone in the world. Given that people no longer want it, it isn’t a big ask to get them to donate it to you. All you have to do is make it as simple as possible.

The internet has changed the way we buy our clothes, and it can change the way we donate. Deliveries to work or home are commonplace, and the same applies to collection; the business of logistics is run on maximising capacity, so the opportunity for the vans to return full means we that have negotiated some excellent rates – with a little CSR arm-twisting.

So all you have to do is ask your supporters or the public if they will donate their clothes to you and fill in our online form: we send them a bag, they fill it up and either return it to one of more than 5,000 drop-off points or schedule a collection online. 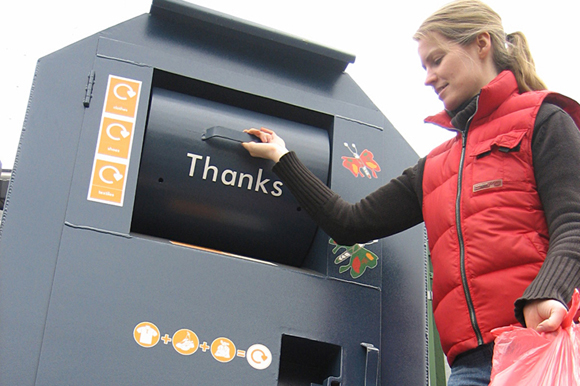 The clothing is brought to the LMB sorting factory where a team of more than 100 specialist graders ensure the value is maximised by sending it to the correct market. This means each garment donated is priced and sold to maximise your income, while any costs are netted off that income. So there is no risk to you.

This is also a great way to keep in touch with your supporters and spread your charity's message to the wider public. Why not combine it with other fundraising activities? If you’re hosting a coffee morning, you could ask everyone to bring some clothes. Then, if they don’t have time to bake a cake, they won’t feel as though they are turning up to the party empty-handed. If you have an office, day centre, hospice or just about any building, why not have a donation station or ask a corporate supporter if they can host one?

In fact, if you have a charity shop and struggle to find a reliable rag man, or want to see if you can get better value, simply book a collection – it can be as large or small as you want, any day of the week.