Four ways to liven up the annual report

If you have ever read a charity’s annual report and accounts, you will know they can be a laborious read, with many viewing them as a chore to be performed once a year to satisfy regulators and funders. But they can be so much more than this if charities want them to be and, when livened up and made more accessible, could prove an advantageous vehicle for showing off your organisation in its best light.

One of the biggest problems with annual reports is they are often written by experts such as accountants and lawyers, who easily slip into jargon and incomprehensibility. David Ainsworth, sector specialist at the Charity Finance Group, says: "You need quite a high level of education to read charities’ accounts, so you are limiting your accessibility. There are a lot of long words and jargon, much of it sector-specific. A lot of the time they seem to have been written by lawyers, so they can be hard to understand."

One of the most obvious fixes is to write in plain English. Referring to the Flesch-Kincaid readability tests and the Gunning fog index are easy ways to ensure the document is as readable and therefore as accessible as possible.

"You need something strong," Ainsworth says. "It needs to be short, succinct and as waffle-free as you can possibly make it."

Equally, a report should not be something people simply "get through". Jonathan Orchard, partner at the auditors Sayer Vincent, recommends that charities treat their accounts and annual reports as a combined document, and use a mixture of text and pictures to keep readers engaged.

It takes more time, effort and money to make it look nice, but getting beyond a single document is a good starting point

"Those dense blocks of text that have been produced for compliance reasons are an immediate turn-off for someone reading it," he says. "It takes more time, effort and money to make it look nice, but getting beyond just sticking the accounts in a single document is a good starting point."

With the editorial technologies to hand today, a PDF report can just be a starting point. Video, audio, infographics and dynamic content, such as maps that show where a charity’s projects took place, can be highly effective for communicating to people in a surprising or interesting way. They can then be shared on social media, highlighting the charity’s work.

Digitising the annual report can also allow charities to provide links to further information or donation pages. And this can in turn lead to using analytics tools, some of which are free, to track how many people engage with content.

"It can be a living document that shows where you are against what you achieved in the previous year," says Cherie Chambers, head of customer experience at the digital marketing firm WPNC. "If you are putting together something interesting that uses video, infographics and charts, and is quite photographic, you can then use social media to drive people towards the detail."

For example, the Brain Tumour Charity (see "Your accounts with a side order of coffee", below) got creative with its annual report in 2018, placing it in a "graze box" that also contained a bag of coffee so supporters could read the report while enjoying a hot drink. At the bottom of the box was a coffee voucher to pass on to others, which included a link to a video.

Even the most engaging annual report will be purposeless if it is buried deep in the charity’s website. Chambers advises taking time to make reports mobile-friendly and promote them across social media.

"If it’s something you’re proud of, which talks to an audience in a particular way, you will be more inclined to promote it more heavily across your website, because you would get more out of it than just a tick-box exercise," she says.

"The annual report is a content-generation exercise that can then be used across a lot of channels in a lot of ways."

Ainsworth says charities should look to the old political adage of repeating key messages. "The strategy is to have a few simple facts and figures that people say all the time at every available opportunity and on every available platform," he says. "When you are sick to death of saying your key messages, that is when the public are just beginning to pay attention."

4 Have a separate impact report

It’s natural to want to keep your mission at the heart of everything you do, but charities should avoid trying to include all their achievements in their annual accounts. Instead, it’s worth considering producing a separate impact report that focuses on what the charity has done and what it hopes to achieve.

Last year, Clic Sargent’s impact report was widely praised across the sector for its honesty. The 28-page report highlighted the charity’s successes, but also included a section on what it didn’t get right.

Kate Lee, chief executive of the youth cancer charity, is keen to emphasise the difference between an impact report and other reports. "The role of the impact report is to describe how well you are managing the transaction for the donor and for the beneficiary," says Lee. "It is not to sell your charity, but to help donors understand the decisions you made and what you allocated, where and why."

An impact report also leaves the charity free to include the technical detail in its accounts.

Your accounts with a side order of coffee

The Brain Tumour Charity has repeatedly sought to do something a little unusual with its annual reports. In 2018, it produced a "graze box", imitating the popular snack subscription service, which contained its annual report and accounts and a 200g sample of specially blended coffee donated by the Nottingham-based coffee producer 200 Degrees. 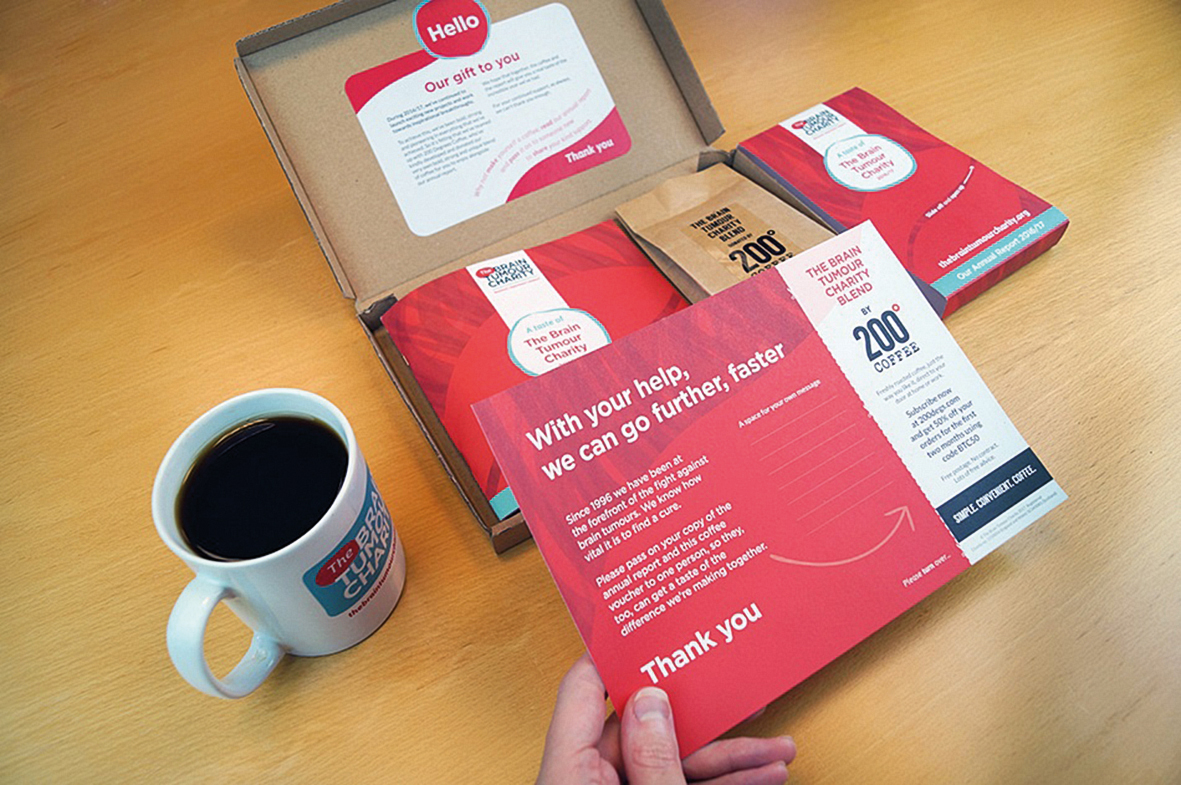 The simple premise was that supporters would brew the coffee to accompany their leisurely read. The accounts included a coffee voucher for supporters to pass on to friends and family, containing a link to a short video that explained the key messages in the report. Before this, the charity’s 2017 annual report came with its own branded desk pad.

Antonio Cappelletti, director of engagement and communications at the charity, says the idea for the 2018 report was born of a desire to raise the charity’s profile and increase engagement.

"Most people were flicking through a few pages, then it just got put on a shelf and later thrown in the bin," he says. "Why waste so much time and effort on something that isn’t appreciated?"

The charity consulted its stakeholders and considered their needs, before landing on the coffee idea as something that could give a literal "taste" of what the charity was about. The report itself outlined the year’s highlights and was structured to be read in five minutes, 15 minutes or more than 15 minutes, depending on how much time the reader had.

The report was well received by supporters and brought new major donors and corporate partners on board, Cappelletti says. The charity produced a more traditional report for those who wanted it, but most went for the more exciting version.

The charity is currently looking at how to top its 2018 effort after a recent rebrand. Cappelletti says it will look at how best to incorporate the new design and message into its next annual report and accounts, due out next year. Cake, anyone?