Fundraising survey: Giving is still strong - but what about trust?

There are reasons to be cheerful as well as fearful in Third Sector's survey of people's views on giving, which ties in with our Fundraising Week. Stephen Cook scans the results

The reassuring message for charities in Third Sector's first fundraising survey is that three-quarters of the British public say they give to charity and 68 per cent of those who give do so because they believe in their chosen causes. Nearly half also cite a strong personal or family reason; and as people get older – and, usually, wealthier – the stronger these two motivations become.

Less reassuring are the reasons chosen by the quarter of respondents who say they do not give. The strongest reason, at 64 per cent, is simply that they cannot afford it – and that figure rises to 70 per cent among those aged 16 to 24, who show themselves in other questions to be more willing to give to new charities and more approving of fundraising methods. 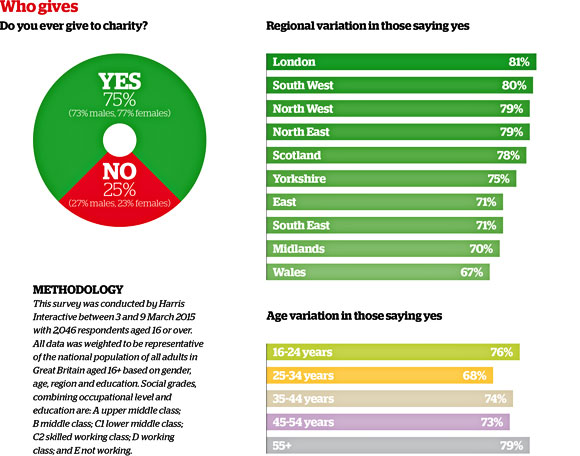 The second strongest reason for not giving is "I don't think enough of my money reaches the people or the cause", selected by 35 per cent of non-givers overall and more than half of the 55-plus age group. And one in five of non-givers, rising to nearly one in three of the oldest age group, say they don't trust charities in general. This finding chimes with other recent findings on declining trust by the Charity Commission and nfpSynergy.

Charities might also be concerned by some responses about fundraising methods. Apart from collecting tins, the highest approval, at more than 40 per cent, is for the methods most easily ignored – TV, radio, newspaper or poster appeals. Doorstep and telephone fundraising get the lowest approval, followed closely by cold mailshots and street fundraising.

The methods obviously work, but do they promote long-lasting, positive relationships? In isolation, they clearly do not

Third Sector commissioned this fundraising survey from Harris Interactive to coincide with our Fundraising Week, a series of conferences, debates and other events starting on 13 April. Martin Bradley, associate director, media and entertainment at Harris, says the results highlight the key question of trust in charities, indicates opportunities for them to engage with younger people, and suggests they should focus on forging more emotional interactions and stronger relationships with donors.

"The survey also tells us that the public does not approve of many of the main ways they are asked to give," he says. "The methods obviously work, for charities otherwise would not use them, but do they promote long-lasting, positive relationships? The responses suggest that, in isolation, they do not."

The finding that 75 per cent of all respondents give to charity is consistent with other surveys, but there are significant variations. The figure rises to 81 per cent in London and 80 per cent in the south west, which includes less well-off areas such as Devon and Cornwall. The south east, although generally affluent, yields one of the lowest figures of 71 per cent, and the lowest – 67 per cent – is found in Wales.

The highest proportion of givers, 79 per cent, is found in the 55-plus age group, which national economic indicators show to be the most affluent, while the lowest proportion – 68 per cent – is among those aged 25 to 34, a group shown by the indicators to be struggling with factors such as housing costs and restricted wages. 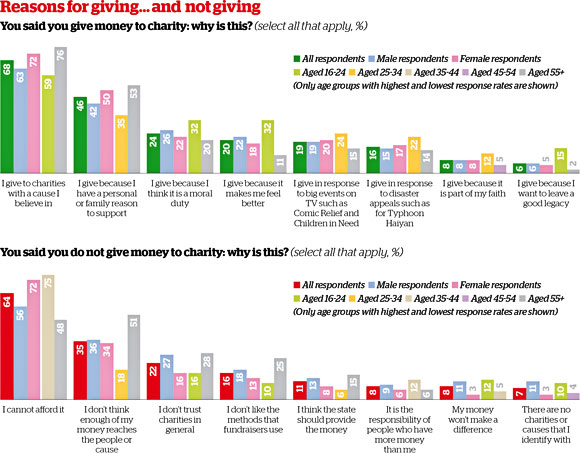 This question reveals that 68 per cent give to charities they believe in, followed by 46 per cent who give because of personal or family reasons. The next strongest reason is only half as strong – 24 per cent give from a sense of moral duty. One in five gives in response to telethons such as Children in Need and Comic Relief, and rather fewer in response to disasters: those between 25 and 34 are the strongest givers in these two ways.

Reasons for not giving

Among the 25 per cent who do not give, the highest proportion of those who say they cannot afford it – 75 per cent – is in the 35 to 44 age group. This figure, nearly 30 percentage points above those in the 55-plus age group, might reflect factors such as the costs of bringing up a family and helping children through higher education.

Bradley draws attention to a factor not shown in our charts - the link between social grade, giving and being able to afford it. "We see that 81 per cent of ABs and 78 per cent of C1s – the more affluent sections of society – give money to charity, while this falls to 72 per cent and 71 per cent for C2s and DEs respectively, which are the least affluent groups," he says.

"We also see this link in responses about not giving to charity. Only half of ABs mention affordability as their reason for not donating to charity, rising to three in four for DEs."

The second strongest reason for not giving, at 35 per cent, is "I don't think enough of my money reaches the people or the cause". The third strongest, at 22 per cent, is a lack of trust in charities in general. These two reasons might be used as convenient excuses by some respondents, but Bradley feels charities would be unwise to discount them.

"Trust has long been a burning issue for the charity sector as a whole, and we see here that it remains so," he says. "Clearly, there is still work to be done on this issue, not least because it means that charities are missing out on a potentially large amount of money."

This question reveals strong disapproval of some methods, and some instructive age differences. Only three of the 10 methods prompted more approval than disapproval, and the only method with a majority of approvers was the most basic fundraising method of all – "cash appeals with donation tins or buckets". 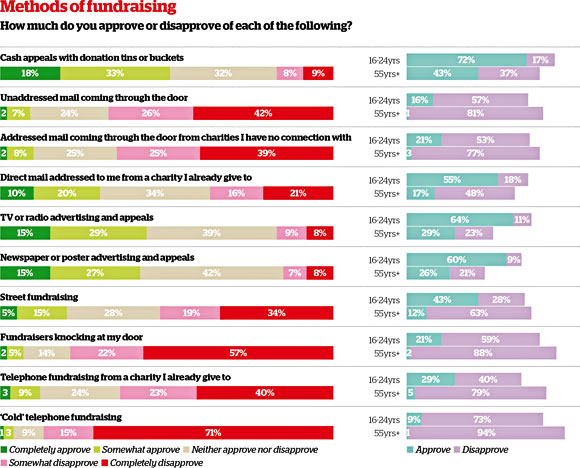 Methods that involve direct personal interaction – telephone, doorstep and street – are the least approved of, perhaps because people feel uncomfortable about entering into discussions with strangers and find it hard to say no if they want to. "Direct mail from a charity I already give to" receives a 30 per cent approval rating – three times as high as "addressed mail from charities I have no connection with", a method usually based on the buying or swapping of donor lists.

How often, who to and how? 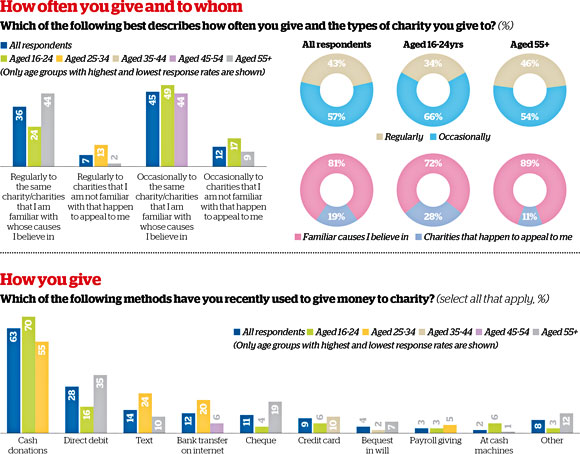 "This shows that charities can appeal to new audiences and the picture is not a 'closed shop' where people simply give to a small number of charities and are not open to new ones or new appeals," he says.

"Interestingly, there is a direct correlation between age and giving more spontaneously, with younger audiences more likely to do so. This makes sense from the point of view of life experience, but it also provides opportunities for charities to engage with younger audiences because they are the most open to a wider range of causes."

Finally, charities might feel reassured that direct debit, the holy grail of giving methods, is the second most-used method at 28 per cent, rising to 35 per cent in the most affluent 55-plus group (19 per cent of which clings on to cheques). Text giving (24 per cent) and bank internet transfer (20 per cent) are strongest in the 25 to 35 group.

Subscribers to Third Sector who would like to have the full report should email stephen.cook@haymarket.com