The events of the past year have brought big changes in the public's view of fundraising, according to our Harris Interactive survey. Stephen Cook reports

This survey leaves little doubt that the events and media stories of the past year have had a powerful effect on the opinions and feelings of the public about charities and fundraising - and on their stated willingness to donate to charities.

A net proportion of 22 per cent of respondents, for example, said news stories about fundraising methods had made them much or slightly less likely to give to charities (see Chart 1. This figure rose to 35 per cent among those aged 55 or more. 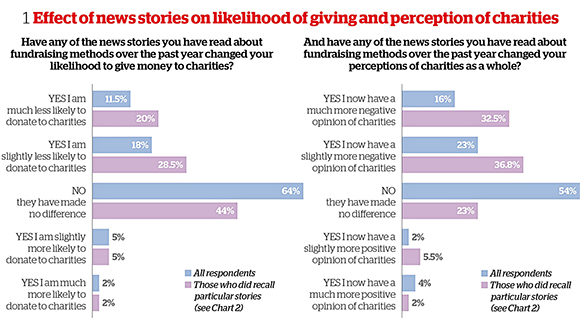 The figure was higher still, at 41 per cent, among the 25 per cent of respondents who could remember specific new stories, such as the targeting of elderly people or persistent telephone fundraising (Chart 2).

Similarly, a net proportion of 33 per cent of respondents said news stories about fundraising methods had changed for the worse their perceptions of charities as a whole. The figure rose to 49 per cent among those over 55, and 62 per cent among those able to recall particular stories.

"It is clear that recent media talk has definitely impacted charity perceptions and likelihood to donate," says Martin Bradley, associate director for media and entertainment at Harris Interactive, which conducted the survey for Third Sector among a representative sample of 2,065 UK adults above the age of 16.

"Whether this actually makes a difference in terms of giving remains to be seen. But it really does feel like a tipping point when you look at all these questions as a whole - the fundraising world needs to listen to what the public are saying."

The question about what would reduce people's trust in charities (Chart 3) confirmed the influence of the media: 29 per cent of respondents chose options involving "bad media coverage." But these were in fourth and fifth place behind statements including "being pressurised to sign up or donate" (45 per cent) and "fundraisers knocking at your door" (38 per cent.) 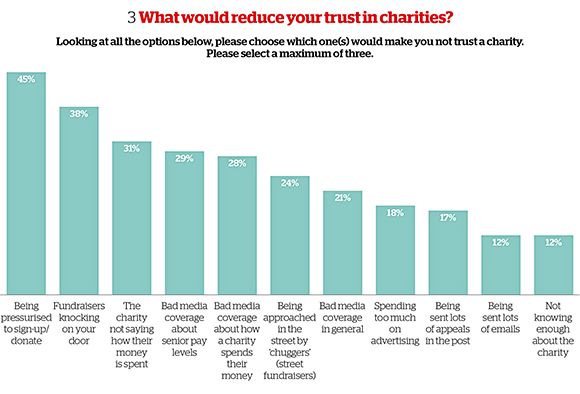 The survey also showed a strong appetite among the public for the tighter self-regulation of fundraising now being put in place at the behest of the government. The Fundraising Regulator, which will replace the Fundraising Standards Board, is expected to start work later this year. Seventy-three per cent of respondents to the survey were not aware this was happening (Chart 4).

But more than half - 51.5 per cent - said they would be somewhat or extremely likely to register with the Fundraising Preference Service, which will be operated by the new regulator (Chart 5). It will allow people to opt out of all fundraising communications from all charities, but will also allow them to continue to receive communications from some charities.

Of those likely to register, 69 per cent said they would maintain a complete ban on fundraising communications, which would, if the figures held good, mean some 35 per cent of the UK population closing themselves off from charity appeals.

Bradley points out, however, that the remaining 31 per cent who would opt to continue to receive communications from their chosen charities is a decent proportion. "If people are in control, it could foster better relations with charities," he says.

"If you choose to receive communications, I would argue that you are more inclined to read them and subsequently engage with that charity - compare that with getting something out of the blue and ending up annoyed about it." 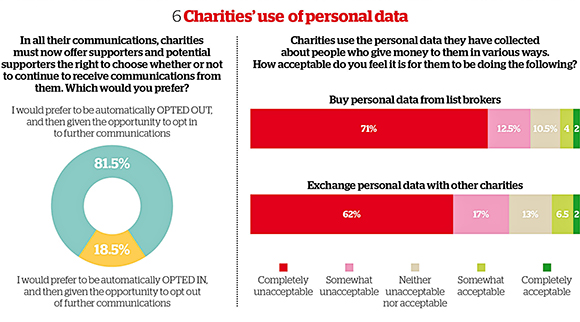 The Code of Fundraising Practice, currently set by the Institute of Fundraising but soon to be transferred to the Fundraising Regulator, does not specify whether charities should offer opt-in or opt-out wording, but says the type size must be at least as large as that for requests for donations or personal information.

Respondents also had strong views about the buying and swapping by charities of donor lists, which has been a matter of controversy. Buying such data from list brokers was deemed completely or somewhat unacceptable by 83.5 per cent, and the exchanging of data with other charities was given the thumbs-down by 79 per cent. 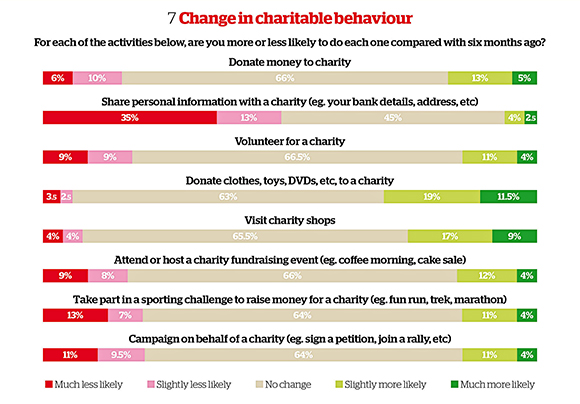 "Now this is stated behaviour, which may be different to actual behaviour," says Bradley. "But again, it shows that many people do not like the constant hassle of being asked to donate - and this is especially true of older age groups.

"The 16 to 24 age group is the only one where more say they give when asked than without being asked. This shows that charities need to tailor their fundraising strategy to their audience and/or by demographics, as different ways will work for different people."

Comparison of the answers to questions that were asked in both this year's survey and a similar one conducted by Harris last year also confirmed an increase in sensitivity about fundraising methods. Reasons people ticked for not giving remain in the same order as last year, but the biggest increase, from 16 to 21 per cent, was under the heading "methods used by fundraisers."

Bradley concludes: "All in all, it is a very clear story that people do not like some of the main methods that are used by charities. The way charities have behaved in the past may start to cause them problems in the future.

"What we do not know yet is whether it has actually impacted on giving. And what is encouraging is that young people remain the most open to different ways of fundraising, and to being contacted by charities. So charities need to be more targeted in what they do and use different strategies - one size does not fit all."

A sample of 2,065 adults over the age of 16, weighted for gender, age and geographical location, were questioned between 1 and 4 March. A supplement exploring the results in depth will shortly be available at www.thirdsector.co.uk. A detailed examination of the figures will be presented by Harris Interactive on 20 April during Third Sector's Fundraising Week: www.fundraisingweek.co.uk