Future of Fundraising: Is this the end of the fundraising department?

Fundraising teams as we know them will disappear and data will increasingly inform donors' decisions in the future. Rebecca Cooney and Andy Hillier ask leading fundraisers for their predictions

Income from fundraising has proved remarkably resilient. Despite high-profile charity scandals and a faltering economy, donors and funders have continued to dig deep. Figures from the Charities Aid Foundation show that between 2013 and 2017 total giving remained remarkably stable, hovering at around £10bn a year.

The annual accounts of the UK’s largest fundraising charities paint an equally positive picture. Voluntary income from donations, grants and legacies at Cancer Research UK, Oxfam, Save the Children UK, the British Heart Foundation, the British Red Cross and Sightsavers all exceeded more than £100m in their latest financial years.

Yet there has been something in the air in for some time that all is not well in the fundraising world. There have been provocative online blogs, impassioned conversations behind closed doors at conferences and rumblings of discontent at the continued pushing of outdated models of practice.

The critics argue that dramatic falls in income lie ahead unless fundraising starts to modernise, and by modernise they mean charities rethinking and rebooting their relationships with donors and embracing the new opportunities afforded by digital technology.

Joe Jenkins, director of supporter impact and income at the Children’s Society, is among the leading lights in the fundraising sector who has been calling for reform. He believes that charities need to "pivot into new territory" and move away from raising their incomes in very similar ways.

"Just as there isn’t only one business model for the commercial sector, nor should there be for charities," Jenkins tells Third Sector. "In the future, I expect to see a far greater diversity of approaches within civil society."

Leesa Harwood (left), a fundraising consultant and former head of fundraising at the lifeboat charity the RNLI, says charities have been guilty of "institutional isomorphism", essentially copying each others’ structures and techniques. As a result, she argues, they have become too homogeneous.

"In 2015, the fundraising sector was rocked to its core because ‘commoditised’ fundraising led to a backlash against charities after the Olive Cooke case," she says. "Yet the big, direct-marketing juggernauts persist and charities remain stuck in their old ways."

Harwood points to a study conducted in 2016 by the online platform Leetchi.com, which found that 50 per cent of 18 to 24-year-olds and 40 per cent of those aged 25 to 34 would prefer to use crowdfunding platforms to donate money directly to individuals than donate by means of an established charity organisation.

"Yet we continue to try to get the next generation of world changers to conform to the existing charity model," she says.

Paul Amadi (right) has held some of the biggest jobs in fundraising and last summer took over as chief supporter officer at the British Red Cross, the charity’s most senior fundraising role. Fundraising, he believes, has reached a point of peak uncertainty. "The warning signs are there for all to see," he says.

"In the declining response rate to our cold appeals, reduced volumes of sign-ups by direct dialogue and increasingly hard feedback about fundraising approaches.

"That’s not at all to say that there aren’t organisations really maximising the existing ways of fundraising, but in terms of longevity and in terms of where the sector will be in 10 or 12 years time, it is necessary for us to evolve."

In the future, he says, "there’s going to be more emphasis on relational fundraising and on creating more meaningful engagements and relationships with supporters, with an even greater focus on lifetime value".

This evolution away from fundraising is reflected in the job titles now springing up at major charities.

If Uber can tell me in real time how far my cab is, why can't my charity tell me where my money has gone?

Neither Amadi nor Jenkins have the word "fundraising" in their titles, even though they oversee the fundraising departments at their respective charities. Similarly, Harwood held the job title of director of community lifesaving and fundraising during her final years at the RNLI.

Jenkins says this shift will continue in the coming years, arguing that the fundraising departments might ultimately disappear over the next decade.

"I’m not convinced the continued separation of ‘fundraising’ – as a department, function, discrete endeavour or profession – will be serving us well in 2030," he says.

"There is already a shift towards the principles of ‘supporter engagement’, which prioritise the whole supporter experience, value every type of contribution – such as money, time, voice and more – build relationships and movements focused primarily on long-term impact over short-term transactions, and break down those unhelpful internal silos of fundraising, communications, campaigning, volunteering and so on."

Over the next decade, Jenkins says, charities will also need to shake up their dated bureaucratic, hierarchical management structures and organise around beneficiaries and supporters, "rather than functions and fiefdoms".

Charities will need to get up to speed with the potential impact of technology on fundraising and the charity sector more broadly, the experts warn.

Too many leaders exist only in the here and now. They are victims of short-term targets, not architects of the future.

"In the 1960s, the tipping point from fantasy to reality was 15 years, as technologists perfected the application. Since then that perfection period has grown ever shorter.

"But the real impact of technology is the expectations and behaviours that surround it. We are now ‘Uber’s children’: if we see something is possible in one category, we don’t understand why we can’t get it somewhere else. If Uber can tell me in real time how far away my cab is, why can’t my charity tell me where my money has gone?"

Rhodri Davies, head of policy at the Charities Aid Foundation and lead for its think tank Giving Thought, wonders whether fundraisers could be "bypassed" in the long term, or whether they might actually become more vital "as the curators and navigators" that help donors find their way through an overwhelming amount of information.

The continuing growth of data, plus the predictive power of artificial intelligence, will also enable donors to make ever-more rational decisions about how to give effectively, says Davies. Technologies such as virtual and augmented reality will enable new kinds of experiential fundraising, potentially being used as "empathy machines" to generate donations, according to Davies.

Loyalty to established charity brands is likely to come under threat in the years to come, partly because younger generations will align themselves with new and different charities and partly because more corporates will use their brand power to bring about social change.

It’s no longer the case that people will set up direct debits and simply leave them running for 25 years without thinking about it," says Kathryn Holloway, head of individual giving and supporter care at Friends of the Earth. People will simply "vote with their feet", she says, and find other ways and other organisations if they don’t think they’re getting what they want from you.

Change will need to come right at the top of charities, and not just in fundraising departments. Chief executives and trustees will need to accept that they must move away from fundraising targets based largely on previous years’ income and be willing to take tough decisions.

"Too many leaders exist only in the here and now," says the fundraising consultant Harwood. "They are victims of short-term targets instead of architects of the future. These leaders wait until change is forced upon them by a burning platform."

The fundraising model and the charity model are not completely broken yet, but Harwood argues that "only those leaders brave enough to smell the smoke and change before they have to will hand their successors the legacy they deserve".

How fundraising needs to evolve

Deborah O’Dowd, deputy fundraising director, Greenpeace UK: Twelve years ago, people said Facebook was a fad. Today it’s the biggest driver of supporter growth at Greenpeace UK. Nobody could have predicted that, so I’m sceptical about looking too far into the future. If you have identified the factors that underpin success (or failure!) and apply these to new market trends, the fundraising programme should evolve organically.

At Greenpeace we’ve just launched a fundraising team dedicated to raising money using instant messaging, because we know direct dialogue works and conversations are happening more and more online. We’re simply adapting established fundraising methodology to a shifting media landscape. People don’t really change, but how they send and receive communications does. The trick is to be agile and aware.

Victoria Smith, head of philanthropy, Shelter: Fundraising needs to be less isolated and more engaged with other areas, such as finance, communications and service provision. Decision-making and strategy need to be collaborative, which means the traditional model will be broken – some charities might struggle with that. Charities haven’t historically been the best at evolving, but the pace of change needs to pick up. These changes need to become a reality rather than just being talked about. 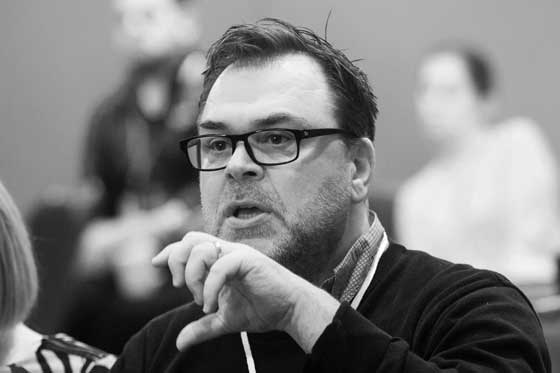 Paul de Gregorio (above), founder of the online fundraising agency Rally: For me, the broad themes we need to consider are:

Third Sector interviewed a number of figures from the sector about the future of fundraising. Read more from the following: