The future of fundraising (Part I): The day of digital has come

With traditional fundraising channels facing big challenges, is digital about to take over? Susannah Birkwood reports on the emerging trends

Traditional fundraising techniques have come under intense pressure over the past 12 months: numerous telephone fundraising agencies have gone under, income from face-to-face fundraising is at its lowest level since 2009/10 and several major charities are under investigation for potential breaches of data protection rules. So could digital innovation be the answer to the sector's woes?

Branislava Milosevica, digital transformation consultant for several prominent charities, believes the answer is yes. "We need to create a range of fundraising products that truly live in the digital ecosystem, where the majority of our supporters are and will increasingly be in," she says. "Such a model will help us create a new generation of donors before the current charity fundraising model collapses - because make no mistake, collapse it will."

Her comments are in line with the projections of the country's biggest online giving platform, JustGiving, which currently processes the vast majority of digital donations in the UK. Its chief marketing officer, Charlie Wells, optimistically predicted earlier this year that online giving would represent almost half of all UK giving by 2020.

JustGiving and other online giving platforms such as VirginMoneyGiving and BT MyDonate dominate in the online giving space at present, but the recent launch of Facebook's updated "donate" tool in the US suggest this dominance may well come under pressure in the not too distant future. Other innovations such as contactless donations, virtual reality fundraising and crowdfunding through websites such as GoFundMe and Indiegogo could also shake up the world of digital fundraising.

Sceptics point out that the internet has been around for almost 30 years, yet only 16 per cent of charitable donations were made online in 2015. But Matt Haworth, author of The Digital Fundraising Book, says in his book that it is only a matter of time before digital takes over.

"As our population ages and old donors die off, the public will become increasingly hostile towards old-school techniques," he says. "Intrusive offline fundraising doesn't have a place in a world of digital communication that people are used to being in control of and participating in."

In the following five articles, we look at how technology is being used in five areas of fundraising and assess the likelihood of future success.

Is crowdfunding the wave of the future? 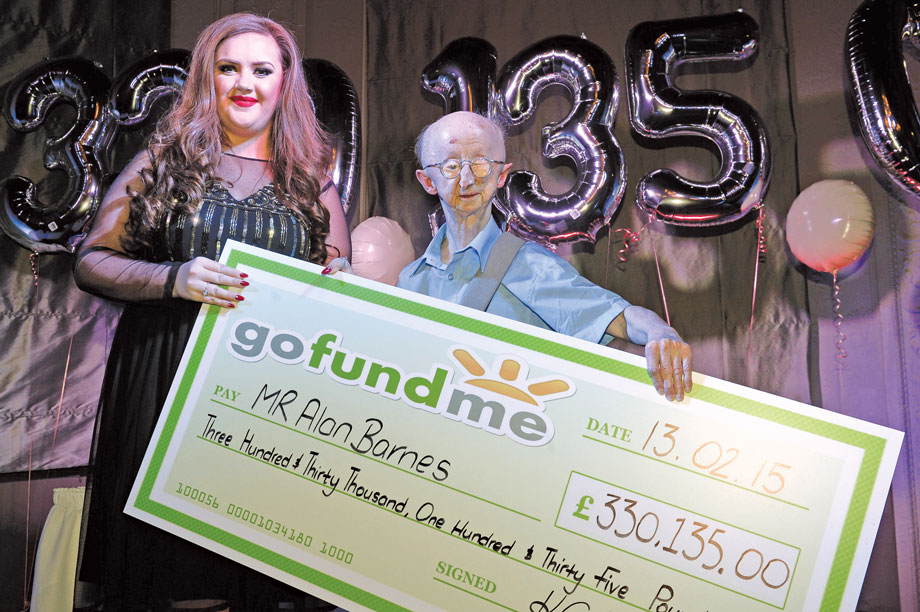 When Katie Cutler started raising money last year for Alan Barnes (pictured above), a disabled pensioner who was mugged outside his home, she bypassed the charity sector. Rather than raising money for a charity that worked with victims of violent crime, she created a page on the crowdfunding website GoFundMe so that the money people donated would go directly to her and she could pass it to Barnes. She raised £329,000 in a week.

Donation-based crowdfunding is part of a trend in which people are relying less on charities to help them fulfil their philanthropic aims. At a time when trust in charities is at a record low, some people are opting to remove them from the equation altogether.

Dignity in Dying chose the website Crowdfunder to raise the £10,000 it required in August 2015 to fund a series of advertising billboards that urged MPs to support the Assisted Dying Bill. "We'd never done anything like it before," says David Pearce, the charity's director of fundraising and marketing. "We weren't sure whether our audience would respond well to crowdfunding, but we needn't have worried." The campaign reached its target within three days and within a further three weeks it had raised £30,000. Dignity received more than 1,100 gifts and 239 new donors from the campaign, Pearce says. The average pledge was £27 - a similar value to the charity's average direct mail donation - and 85 per cent of pledges came from people signed up to Dignity's email list and social media accounts. "This would not have worked if we hadn't spent months before emailing people every week and building up people's knowledge of and affinity to the campaign," says Pearce.

Others - such as the friends of the murdered MP Jo Cox, who raised £1.5m on GoFundMe for Hope Not Hate, the Royal Voluntary Service and the White Helmets - are attracted to the way that crowdfunding sites allow them to raise money for several charities at once. Unlike event-based fundraising pages, which send the money directly to the charity concerned, crowdfunding sites direct the money to the fundraisers, who can then split it among several different organisations. The downside is that they do not allow donors to claim Gift Aid and, in the case of GoFundMe, they take at least 6.4 per cent of every donation as profit.

JustGiving estimates that this form of fundraising will raise $1.3bn for good causes in the US this year and, though the UK market is much smaller, according to the innovation charity Nesta it grew by 500 per cent to £12m in 2015. Nesta says it could soon have significant implications for community and voluntary sector organisations in this country.

Will the implications be positive, though? Several small and medium-sized charities have begun curating their own crowdfunding campaigns (see Case Study, below), but there is concern that charities could lose out on donations as a result of supporter-led campaigns that cut them out of the loop. Charlie Wells, chief operating officer at JustGiving Crowdfunding, says that in the US the rise of crowdfunding has caused competition for fundraisers. "People who create personal crowdfunding pages aren't going on to create charity fundraising pages," he says.

He says JustGiving's own platform, launched in 2013 as Yimby.com and rebranded last year, expects to crowdfund £50m for good causes this year, but only 20 per cent of this will go to charities. Wells nevertheless believes charities stand to gain more than they will lose because some platforms, such as JustGiving Crowdfunding, send fundraisers information about charities related to their interests, which makes them more likely to support those organisations in future.

Eleanor Harrison, chief executive of Global Giving, one of the longest-running of the 700 online crowdfunding platforms, is also positive. "The average first-time campaign raises about £7,500, so it's not a solution for everybody - but it's an amazing way to kick-start or expand your online fundraising," she says.

Read next - The future of fundraising (Part II): How eBay has changed the game for charitable retail