Things aren't perfect, but there are signs that perceptions of the sector are improving after the negative media coverage of recent years. Andy Hillier reports.

There has been much debate in recent years about whether the relationship between the general public and charities has become broken after a number of sector scandals.

But to what extent has that relationship become damaged, and is the public now less likely to donate to charities as a result? Research for this year's Donating Trends survey, produced by Harris Interactive on behalf of Third Sector, sought to addresses these questions and more.

However, there appear to be significant differences between the generations. Twelve per cent of those aged over 55 considered charities untrustworthy, compared with just 6 per cent of 16 to 24-year-olds.

Respondents were also asked whether they had seen any news stories about the fundraising practices of charities over the past two years and whether this had influenced their opinions of charities and their likelihood to give (see figure 3). 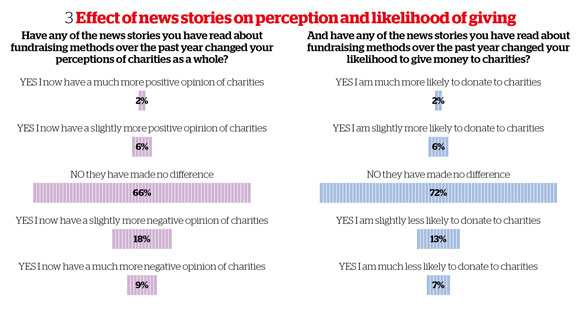 "The study indicates that, although the issues haven't gone away, they're less prominent in people's minds than they were last year, when the fundraising scandals were in the news," says Bradley.

Asked whether the news stories they had seen had changed the likelihood of them giving to charity, 20 per cent said they were less likely to give now, compared with only 8 per cent who said they were more likely to do so. The vast majority (72 per cent) said the stories they had read had made no difference to their likelihood of giving. Again, although this is not entirely positive, it is an improvement on last year, when 30 per cent of respondents said they were less likely to donate after reading negative coverage. "This points towards a better picture for charities this year compared with last year," says Bradley. "It's better, but it's not perfect." 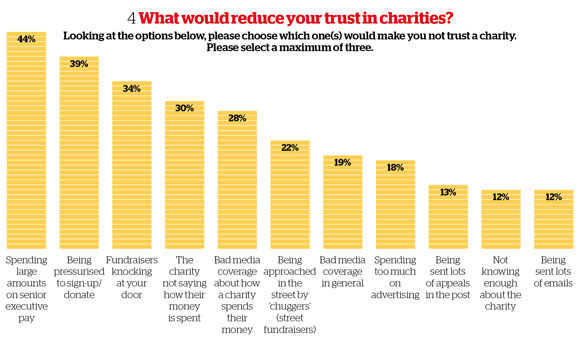 But Bradley says the responses indicate a year-on-year decline in concern about the techniques charities use to fundraise. "Last year, 45 per cent of respondents were concerned about being pressurised to sign up or donate, compared with 39 per cent this year, and 38 per cent were concerned about fundraisers knocking at your door, compared with 34 per cent this year," he says. "One of the stories to emerge is that the methods fundraisers use are not as much of an issue as they were last year."

The survey also asked how much a charity should pay its chief executive or highest earner (see figure 5). Fifty-six per cent of respondents said they should be paid less than £40,000 a year and only 10 per cent said they deserved to receive more than £100,000 a year, highlighting the ongoing challenge larger charities face when justifying senior executive pay levels to the public.

Respondents were also asked whether they had engaged with charities online, including giving money to a cause, visiting a charity website or Facebook page, or taking part in an online campaign (see figure 7). 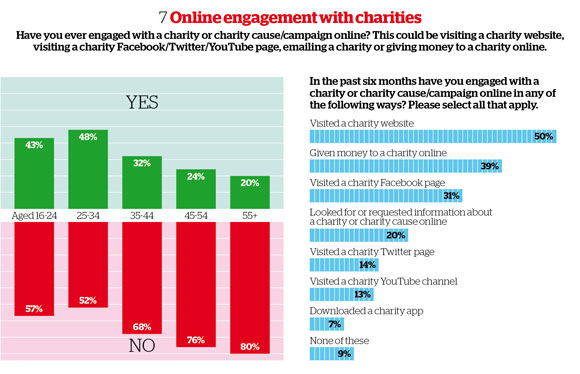 "The difference by age was quite startling," says Bradley. "It provides another reminder to charities that a catch-all approach is not going to work.

The full Donating Trends report is available to purchase now