Although it is a small charity, Chance UK has franchised its mentoring model to larger organisations across the UK, writes Femke Colborne

Chance UK is a small charity that provides mentoring programmes for five to 11-year-olds with behavioural difficulties. It is based in London but also runs projects in other locations, including Liverpool, Monmouthshire and Yorkshire. The charity aims to prevent vulnerable children frombecoming involved with crime, to boost their confidence and to improve their behaviour. 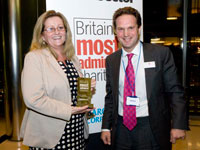 Gracia McGrath, who has been chief executive of Chance UK for the past 10 years, says the charity’s success is based on a determination not to stray from its original mission. "We have concentrated on our model," she says. "A lot of people have approached us and asked if we could also work with different age groups, but we wanted to put all our powers into
improving the model we had. For a while, ‘specialism’ was a dirty word, but we ignored that. It allowed us to focus on who we weren’t getting to. Straying from its mission is the worst thing an organisation can do."

Since 2006, the charity has been rolling out a franchise model across the UK, persuading other organisations to bid to help run its services. There are currently six local franchises, with partners including Action for Children, Women’s Aid and Child and Family Action, a small organisation in Yorkshire. Staff from Chance UK help to recruit and train mentors at partner organisations, but control of the projects is essentially handed over and they are locally funded.

The franchise model is just one way in which Chance UK has shown itself to be innovative. It has increased its recruitment of male volunteers – more than 50 per cent of its mentors are men. The charity has several volunteer police officers on its books and works closely with the police to identify children who could benefit from its services.

Chance UK has secured the backing of some high-profile political figures as well. Sarah Brown, wife of the former Prime Minister Gordon Brown, is a long-term supporter and arranged a party for some of the children at 10 Downing Street when her husband was still there.

In 2007, David Cameron launched the Conservatives’ Make British Poverty History from the Chance UK offices in north London. The arrangement came about as a result of a long-standing relationship with Iain Duncan Smith, who is now the Secretary of State for Work and Pensions. "When Duncan Smith started talking about early intervention, I thought ‘right, I’m having him’," says McGrath. "I would turn up to the opening of an envelope if he was there."

She says that politicians might seem as if they know everything, but they "need people on the ground like us, and we have a duty to relay our experiences to those in power".

McGrath admits that it can be risky talking to politicians, but believes risk has been a key ingredient of the charity’s success. "I think you have to be quite calculated about risks," she says. "You can’t risk the safety of the children, but you can take risks in terms of development. If you take risks and make things work, you change the environment and the way people think." 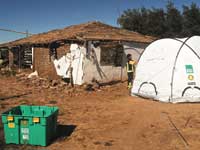 Every year, hundreds of thousands of families across the world lose everything when disaster strikes. ShelterBox provides emergency accommodation and life-saving supplies to families in need.

Each ShelterBox is tailored to each disaster, but boxes typically contain a tent for an extended family, blankets, water storage and purification equipment, cooking utensils, a stove, a basic tool kit, a children’s activity pack and other vital items.

Over the past year, the charity has responded to crises in areas such as monsoon-hit Pakistan and drought-stricken areas of east Africa. This year, it has provided more than 4,500 tents for families in the Dadaab refugee camp in Kenya alone. Financially, the charity has gone from strength to strength. In 2010, its income more than tripled to almost £20m from £6.5m in 2009. 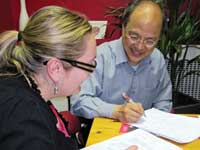 Small charities often suffer from a lack of skills, resources and expertise. The Small Charities Coalition provides a voluntary sector matchmaking service – matching small charities with other organisations that have the expertise the small charity lacks. It runs training and events to help provide small charities with the skills they need and offers a free trustee finder service. With the financial climate making conditions tough for many smaller charities, the coalition’s services are particularly valuable at this time.