This global campaign to raise money for prostate cancer and men’s health by urging men to grow moustaches every November has reached epic levels: in 2012 more than 1.1 million ‘Mo Bros’ and ‘Mo Sistas’ raised £88.2m – more than £23.5m in the UK.

The phenomenon started in 2003, when 30 young men in Melbourne, Australia, grew moustaches for a prank, just to see what they’d look like, and decided the following year – inspired by breast cancer campaigns – to keep the idea going, adopt a cause and raise money through sponsorship.

All funds raised in the UK go to Prostate Cancer UK and the Institute of Cancer Research. The growth of other month-themed fundraising events, such as Bowel Cancer UK’s ’s Decembeard and Cancer Research UK’s Dryathlon in January, is evidence of Movember’s originality. One nominator said: "They tackle a difficult subject in a fun way, get tremendous endorsement from celebrities and sports stars and have engaged a very non-traditional donor group – namely, young men."

Adam Garone, co-founder of Movember and now chief executive of the charity, told Third Sector in a recent interview : "Every day I laugh to myself that my life has become about moustaches. But it is obviously about more than that – it’s about men’s health."

This category is for the charity that stands out from others in its record of doing new and different things. Its achievements might be a single outstanding innovation in campaigning, fundraising, marketing, service delivery or partnership; or a consistent ability to pioneer ways of doing things that others have followed. 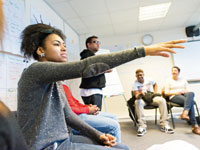 Leap Confronting Conflict – usually known as Leap – was founded in 1987 with support from the Joseph Rowntree Charitable Trust and the Quaker Peace Committee, and became a charity in 1999. It provides conflict resolution training aimed at preventing young people from becoming involved in violent crime.

It also runs bespoke courses for companies, using young people who have graduated from its programmes. Its training in the workplace programme helps employees to learn about their ‘conflict triggers’ and how to manage them so they can build better relationships with customers and colleagues. One nominator said: "Involving young people in charged service delivery to corporates is just brilliant."

Leap has won several awards and was the subject of a recent BBC TV documentary, which featured one of its strongest supporters – Brooke Kinsella, winner of the BMAC Special Award this year and runner-up in Celebrity Charity Champion. 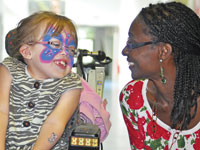 In 2011, the disability charity launched a £20m bond – the Scope Bond Programme. The finance raised will be used to expand sustainable income generation for its work with disabled people, such as fundraising programmes and its network of charity shops. The bond is seen as a milestone for the sector that could open the way for other large charities to address their funding needs.

One nominator said: "They could have just gone with a straightforward loan, but have used an emerging market idea and gone after truly new money."