Charities minister Nick Hurd tells Stephen Cook that, despite lingering fear and frustration, he sees transition in the sector and a determination to find better ways of doing things

It's the day of the local elections: fear and loathing of the onward march of the UK Independence Party are consuming the upper ranks of government, and knives are being sharpened in Whitehall for David Cameron. The media is full of sound and fury on the European referendum, immigration, loonies, fruitcakes, closet racists ...

It's different in Nick Hurd's office overlooking Horse Guards Parade, where tourists cluster in the sunshine around a detachment of red-coated Household Cavalry. The charities minister is in his shirt sleeves, focused on a trip to the US to prepare for the social investment session that the Prime Minister has put on the agenda for the next meeting of the G8 nations.

"There's been a positive response to that, because there's no mature economy that isn't facing a similar challenge of how you meet the demand for public services when you have less money," says Hurd. "How do you encourage genuine social innovation in very risk-averse systems? We're proud of being a world leader in social investment. It's part of the ecosystem that I'm keen to develop and grow, and we have to have a bigger pool and a genuine market to test investor appetite."

He sounds like a man on a mission, and his commitment is unmistakable. But Hurd turned 51 this week, has been in his job for three years almost to the day and was the shadow minister for 18 months before the 2010 election. With some achievements under his belt and the political landscape shifting, isn't he a bit restless, anxious to move on and up, do something different? The question produces his most animated response.

"I love my brief," he says. "I was saying to my boss, Francis Maude, the other day that I get more and more excited by it. I've had the chance to sit here and put stuff in place, I'm starting to see some results from it and it's fantastically exciting. The sector is such an important part of society and I'm really alive to the opportunities out there. And I get regular contact with amazing people and projects that reaffirm my faith in human nature - so what's not to love?"

The results he sees emerging include social impact bonds, of which 13 are operational and 10 in gestation. "The Social Outcomes Fund we set up to encourage them has had huge interest from diverse places," he says. "There's a window of opportunity, but the public sector finds it hard and is risk-averse. Social impact bonds provide a space for genuine innovation and bring in risk capital."

Other emerging results Hurd cites include the National Citizen Service for 16-year-olds, now entering its second substantive season, and the establishment of Big Society Capital, which is involved in financing social impact bonds (see "Social investment" below). There is also, he says, an "interesting spike in volunteering" that he's trying to foster with initiatives such as the website Join In, which makes use of the database of Olympics volunteers. "We'd be crazy not to capitalise on the spirit of the games," he says.

Hurd also says there has been "massive change" in the commissioning of public services, including the establishment of a Commissioning Academy to help commissioners work better with the voluntary and community sector; and there has been, he says, a big change of attitude in the business world towards rebuilding public trust and connecting with the voluntary sector. "It's going to take time, but I'm encouraged that we're beginning to make a difference in creating conditions for the sector to participate more in delivering public services," says Hurd.

On another front, he does not underestimate the task of making Britain a more generous society when money is tight and budgets are under pressure, but he says he is encouraged by the fact that the public "hasn't cut back seriously on giving". At present, 80 per cent of giving of time and money comes from 30 per cent of the population, and he says his task is to broaden that civic core through creative ways of making giving easier and more compelling.

Perhaps the biggest imminent opportunity for the public service delivery that Hurd refers to comes in the plan by the Ministry of Justice, confirmed in the Queen's Speech last week, to contract out most probation services. But is the sector going to suffer the same disappointments as it did over the Work Programme?

"We've worked closely with the MoJ to make sure it understands the sector's concerns about payment by results," says Hurd. "We have to wait and see, and hope we surprise the pessimists. This is a big opportunity for the sector."

He remains an enthusiast for payment by results, used increasingly in commissioning public services and in social impact bonds, but says there is a spectrum. "The Work Programme had a very challenging formula. The National Citizen Service built in a bit of payment by results - it shares risk and is much softer. It's horses for courses, depending on what you're buying - we need a sort of payment by results 2.1. We'll have to see what's involved in the case of probation."

But he says his general satisfaction with progress on initiatives for fostering the voluntary sector does not mean he's complacent. "I'm conscious that we're entering a crunch time for many as the cuts begin to bite and the reserves begin to be spent. There's lots of change and I recognise that the priority for many is survival, making themselves more efficient and pulling through. My main anxiety is about the vulnerability of important organisations. We have to help, but we also have to think ahead about how the sector can survive, thrive and play the bigger role we want it to play.

"There is some fear, concern, anxiety and frustration coming out of the sector, and we've talked before about the sector being in mourning. But I think we're seeing a transition, and some fantastic determination and energy to find better ways of doing things. And I'm seeing interesting collaboration with the private sector. Dealing with this is very energising, very important - and fun."

DECLINING EXPENDITURE BY THE OFFICE FOR CIVIL SOCIETY

£226.6m - 2009/10 This figure covers the final year of the Labour government, when Angela Smith was charities minister

£191.4m - 2010/11 The first year of the coalition government brought the first significant fall in spending

Figures include both current and capital spending.

The idea of creating a social investment wholesaler using money from dormant bank accounts was conceived under the Labour administration but taken over by the coalition, which officially launched Big Society Capital in April last year.

Its remit is to use the £600m at its disposal to invest in social finance intermediaries, which in turn invest in front-line social sector organisations. Its first annual report, published last week, shows that from April to December 2012 it made investments totalling £56.6m in 20 initiatives. An additional £10m has been invested in the first financial quarter of 2013. 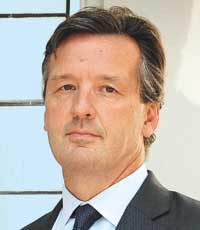 Nick O'Donohoe (right), chief executive of BSC, is pleased with what has been achieved in its first year. "When money is made available, people do come forward and put their thinking caps on about how to access it. That's been encouraging."

Money awarded so far includes an £825,000 investment in a social impact bond in Essex to keep young people out of care by providing them with support from the charity Action for Children. A further £10m has been invested in the Bridges Social Impact Bond Fund to provide finance for social sector organisations to take on payment-by-results contracts.

O'Donohoe says some organisations that have no assets have struggled to access finance. "Those that find it easier to borrow have an asset they can pledge against the loan," he says. But he adds it has found that a lot of organisations don't own their buildings or have assets.

But he argues that the social investment model is a better use of the money than grants. "If we gave all the money away in grants, we would increase the income to charitable organisations by 0.5 per cent a year and the money would be gone after four years," he says. "In the long term, we'd like to bring in £2bn for the £600m invested."