The third sector may have experienced significant job losses over the past few years but, according to the man overseeing a project analysing sector workforce trends, the overall situation is not as bleak as might be assumed.

Steve McKay, a professor in social research at the University of Lincoln, is an honorary fellow at the Third Sector Research Centre, based at the University of Birmingham. For the past five years he has overseen a study, carried out jointly with Skills - Third Sector and the National Council for Voluntary Organisations, of the sector's workforce, mainly using data from the government's Labour Force Survey.

"The sector has been more resilient than many would have predicted," he says. "You would have expected a downturn, but it's weathering the storm, although it has had to adapt."

McKay says that although some funding streams have dried up, charities are still finding creative ways to keep people on. "One story of the recession is that it's not just about the numbers but what people are doing," he says. The overall workforce numbers have been static, he says, but there are more people who are in temporary or part-time work, and many working part-time would prefer to be full-time.

"A lot of the jobs in the sector are caring and advice roles, which tend to attract a higher proportion of women," says McKay. You're also more likely to find a female manager in the voluntary sector than in other sectors, he says, although there are still more men than women in management roles.

The data shows that third sector workers are likely to be older than those in other sectors: 37 per cent of the sector's workforce are aged between 50 and 69, compared with 26 per cent in the private sector and 32 per cent in the public sector. "The sector values life experience a lot, and that means people can go into it at a later age," says McKay. 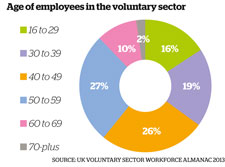 The political environment since 2010 has brought both positives and negatives for the charity workforce, says McKay. For example, the government's keenness to open up contracts such as the Work Programme to the charity sector has helped to create jobs, but cuts in local government funding have led to job cuts.

At the recent Conservative Party conference, George Osborne, the Chancellor of the Exchequer, announced plans for long-term unemployed people to undertake community work placements for charities and voluntary groups. McKay says such schemes could be viewed as a negative for the sector's workforce if the unpaid placements replaced paid roles.

The Economic and Social Research Council funding for the workforce research will carry on until March, but its funding beyond then remains uncertain. McKay says that the University of Birmingham is committed to keeping it going and he expects to continue producing the study for the foreseeable future.

There are also plans to extend the scope of the workforce research. "We will be asking how long people stay in the sector and whether we can identify a particular career path," says McKay. "It's something that we haven't been tracking. We'll ask whether people forge careers in the sector or whether they move around."