Steve Wyler brandishes a small tin treasure chest in one hand and an unusual metal object, shaped a bit like a hairdryer, in the other. Both originate in Hull.

The treasure chest is a game devised by an employee at Community Church, a community organisation that runs a range of local projects in the city. It encourages children to take more interest in books by rewarding them with golden chocolate coins.

The other object has been developed by the Goodwin Development Trust, a community group on the Thornton Estate 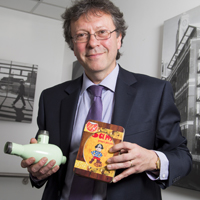 , and removes oxygen from central heating systems, saving about 20 per cent in household energy costs.

Both organisations are members of Locality, the community group membership organisation that Wyler has led since its formation three years ago, and both objects, he believes, represent the way community groups are finding new ways to fund themselves through entrepreneurial, commercial activities.

"One of the things that has happened in Locality and this movement is that people are thinking in fresh ways," says Wyler. "People realise that things could be done better and spot an opportunity. It might be that they're looking to sell products, but more often it will be about how you tackle issues such as worklessness or support families with multiple needs."

Wyler says there have always been community groups with an entrepreneurial spirit, but more of them, in his words, are "getting it". This has been driven partly by the desire of organisations to do things on their own terms and rely less on funders, and partly it is a result of local authority spending cuts.

But it is a nuanced picture, he says, and the march to entrepreneuralism is not always a positive thing for community groups. "About a third of our members have gone through quite serious financial challenges over the past two or three years," he says. "It is often the most entrepreneurial ones that find themselves in difficult circumstances, and often for reasons outside their control.

"For example, they might be reconfiguring their organisation to win public sector contracts. I'm sceptical when people talk about Darwinism and say it's good that the fittest survive because the worst go to the wall. It's not always like that."

Wyler is stepping down as chief executive in July, bringing to an end his 15-year association with Locality and its predecessor the Development Trusts Association, which Wyler led before it merged with the community membership body Bassac to form Locality in 2011. He will hand over the reins to Tony Armstrong, currently the chief executive of Living Streets, which campaigns on behalf of pedestrians and works to help people improve their local environment.

Wyler believes the time is right to hand over because things are going well. The past few years have seen Locality's income grow substantially, from £4.8m in 2011 to almost £8.5m in 2013. "There's high energy and our movement is growing," he says. "The charity is in good financial shape and we're pushing forward on all fronts."

Much of the increase in income can be attributed to its success in winning central government contracts, including the Community Organisers programme. It has also received funding for schemes called Neighbourhood Planning, Community Rights and Our Place, which support people who want to make use of provisions in the Localism Act 2011.

Wyler acknowledges that the government and its commitment to encouraging local people to take more responsibility for their communities has been good for Locality. He also praises the government's approach to designing the projects it has funded. "In nearly all cases, we've played a big role not only in winning the contracts and delivering them, but also in shaping them," he says. "For Our Place, I worked with government on the pilots and helped it to review how they were working. We've done a lot of work arguing the case for this kind of approach."

But some of the government's policies have not been good for members of Locality. Wyler describes the Work Programme as "a wholly negative experience" for those that were involved because they found the large prime contractors, mostly from the private sector, taking the profit and pushing down all the risk to community organisations.

Equally, he has concerns about Transforming Rehabilitation, the Ministry of Justice initiative to outsource most probation work. "We're seeing these curious contradictions in government," Wyler says. "On the one hand we have this drive towards localism; on the other, when you follow the big money, you find it's going into this highly centralised way of operating - which, based on what we believe, is a fallacy about the economies of scale. What we still hear all the time is that government can use public money better if it works on a large scale."

Wyler believes the opposite, and says allowing communities to take the lead in improving their areas is the best way forward. He says the "golden thread" that runs through Locality's membership of more than 700 community organisations is that people living in the most difficult circumstances should be seen as part of the solution, not just part of the problem.

But convincing decision-makers that people living in deprived communities are capable of making a positive contribution is still a battle. "We can always find allies and champions, but there is intense antipathy and opposition to those ideas as well," he says. "What we've found with all of the political parties is that there are some people who really get this, but there are others - and in some cases they still dominate - who don't. There are still the vestiges of the command-and-control philosophy, where people in difficult circumstances are fundamentally viewed as feckless and irresponsible."

The organisers have carried out "listenings" with more than 100,000 residents, and more than 600 projects have been initiated. Wyler says that there have been lots of local successes, including community organisers in the High Green area of Sheffield assisting residents to mount a successful campaign to save a local bus service to Rotherham.

About 60 per cent of the full-time organisers are going from a first year of training into a second progression year, which requires each of them to find a host organisation willing to cover part of their salary. "It's still too early to say how many people will go on beyond that and whether it will be something that is sustained," says Wyler. "But we're reasonably hopeful that there will be a continued legacy of organisers around the country."

The Localism Act was passed in 2011 and devolved more decision-making powers from central government to local communities.

The act gives communities a number of rights, including the right to bid, which allows communities up to six months to bid for buildings or plots of land of community importance, such as village shops and pubs; and the right to challenge, which gives communities the power to apply to take over the running of a local service, such as a library, if they think they can deliver a better service. The Department for Communities and Local Government says the rights have been used almost 2,000 times since September 2012.

The act also enables local people to play a more active role in the planning process through drawing up their own neighbourhood plans. These allow communities to decide where new homes, shops and offices will go. About 1,000 communities have taken the first steps towards producing neighbourhood plans, and 13 plans have been passed by communities, according to DCLG.

Locality is running support programmes to help local people to take advantage of community rights and neighbourhood planning. Wyler says: "More than 10,000 people have contacted us about the new rights - that's a lot of people interested in having a go."