After two months of trials, it launched Donation Boost, which gives donors the option of covering the 5 per cent fee the platform charges

JustGiving has changed its donation fee model so donors can cover the cost of the platform’s fees when making donations.

Launched today after two months of trials with 12 charities, Donation Boost gives donors the option of covering the 5 per cent fee so that it isn't charged to the charity.

For every £20 donated, a donor’s chosen charity will receive £1 more than under the old system if the donor chooses to cover the cost.

Under JustGiving’s former model, if a donor gave £20 to a charity, £5 would be added through Gift Aid, if applicable.

With Donation Boost (see diagram below), donors can add £1 to a £20 donation to contribute towards the fees. So once payment processing and Gift Aid administration fees are taken off, the donation is worth £24.50 to the charity. 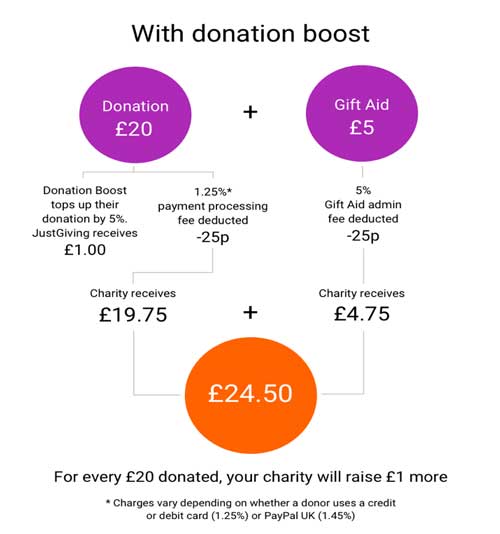 JustGiving said that its testing programme with charities including the Make A Wish Foundation, WaterAid and the Great Ormond Street Hospital Children’s Charity had been positive, with approximately 70 per cent of donors choosing to adopt Donation Boost when it was offered.

The new system will not, however, be offered to users making donations that are ineligible for Gift Aid.

After an initial release today, JustGiving said, it would continue to test the new system and adapt where appropriate. It said 95 per cent of donors would be given the Donation Boost option.

In a statement, the company said it believed the new model would help reduce the cost of fundraising for charities irrespective of their size and would enable small charities to use its platform.

Andy Holland, interim director of fundraising and marketing at the Make a Wish Foundation, said: "We’re thrilled that JustGiving has responded to the sector’s feedback and developed this innovative tool, which not only provides greater transparency but also adds value to our partnership. We’re really excited to see the impact that this will have across charitable giving online."

Neil Bannister, managing director of JustGiving in the UK & Ireland, said: "Donation Boost shows we are determined not to rest on our laurels and are continuing to work hard to offer the best and most innovative solution to our charity partners and donors alike.

"Not only does this innovation demonstrate our continuing and unrivalled commitment to the charitable sector and good causes globally, but also a renewed commitment to transparency with our users in regards to how we operate in order to increase consumer trust even further."