Many autistic people experience sensory overload. There doesn’t seem to be a filter on how much external information is trying to infiltrate their senses. There’s simply too much information and sometimes this can affect their behaviour in public places, but it’s often misunderstood by the public as being "naughty" or even "funny". This was the premise of the National Autistic Society’s #AutismTMI campaign.

Tom Purser, head of campaigns and community engagement at the NAS explains: "Almost everyone has heard of autism, but a much smaller number of people understand what it actually means to be autistic, the difficulties people on the autism spectrum can face and their strengths. Everyone on the spectrum is different and we are reflecting that by telling as many different stories as we can during the campaign.

"With Too Much Information, we set out to change this and to transform public understanding of autism. To make sure our messages were reaching the right people, we developed authentic, original content based on research into the experiences of autistic people and their families."

This campaign is, in essence, about behavioural change, and the charity set its target to increase real understanding of autism by 5 per cent. This might seem low, but is in fact millions when referring to the UK population.

Too Much Information centres around authentic content because it has to resonate with supporters and be true to autism. The campaign was launched with a film, starring 11-year-old Alex Marshall. Its aim was to give people an insight into what can go on inside the mind of a person with autism in a seemingly everyday situation and how they could become overwhelmed by too much information, such as bright lights, loud noises and crowds.

The film proved a hit on social media, gaining more than 56 million views and a million shares. The NAS also launched a virtual reality version of the film, which was made available in shopping centres around the country: about 8,000 people got to experience what life is like in Alex’s shoes. If you have a VR headset or cardboard googles, you can experience it for yourself.

The charity worked on securing a media partnership with The Guardian, which fitted with the NAS's target audience. More importantly, this gave the charity the opportunity to tell lots of different stories and have various types of content, such as video, quizzes and editorial over a sustained period of time. 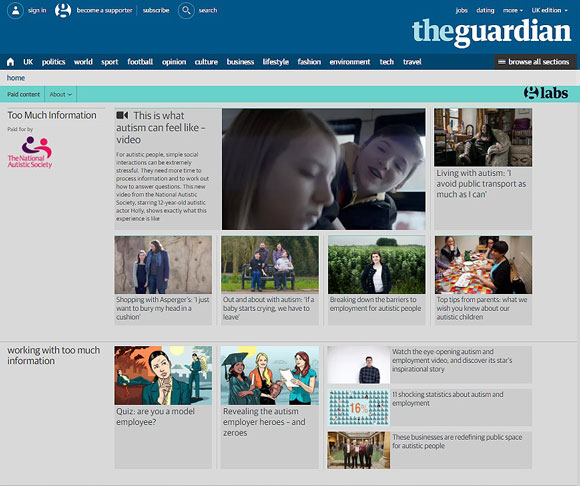 Purser said: "We were delighted that our first campaign film had such a resonance with the public and the autistic community alike. Getting 56 million views was down to an element of luck, of course, but we believe this success was ultimately rooted in good planning and a detailed media-seeding strategy."

Since the launch, another two films have been produced. The second achieved more than a million views and the third almost 10 million. The charity’s social channels grew by almost 25,000 on Twitter and 110,000 on Facebook in the first four months of the campaign.

The biggest result of all? So far the charity has surpassed its target of a 5 per cent increase in real understanding of autism among the public. The campaign is not over yet, however.

For anyone considering a similar behavioural change campaign, Purser recommends some thorough research and making sure you’re clear about your core messages as well as who you want to reach. He advises: "Draw on your existing members and supporters to help shape your content and messages. There is so much competing content on social media that finding an authentic story that draws on real experiences is crucial to cutting through on people’s timelines and holding their attention."

Too Much Information is a three-year campaign with distinct phases. The charity hopes it will address the five things that autistic people and their families say they most want the public to understand about autism: the need for extra processing time, anxiety in social situations, anxiety from unexpected changes or events, sensory sensitivity and how being overloaded can lead to meltdowns. The next phase is Autism Hour, which will be the world’s first mass-participation quiet shopping event, in the week of 2 October.

I am really impressed with the level of research that the NAS undertook in preparation for this campaign. That planning has not only helped to inform its content, but has also ensured that the content actually resonated with its own supporters as well as the public.