Kirsty Marrins: Crowdfunding and the power of one

This method of raising funds has really gained momentum in recent years, writes our columnist

If I mentioned crowdfunding just a few years ago, you were likely to think of rewards-based campaigns such as the Veronica Mars movie, which raised close to $6m on Kickstarter. Donors were offered rewards, such as a limited-edition t-shirt for $25 or a 15-second outgoing voicemail message from Veronica herself (the actor Kristen Bell) for a mere $500 pledge in exchange for their financial support. I doubt you would have thought of a charity.

Over the past two years, crowdfunding for charities has gained momentum and is becoming a popular platform choice for those who want to raise funds quickly, particularly for emergency relief campaigns, and for specific projects. According to Rhys Goode from JustGiving, "At JustGiving we are beginning to see charities increasingly embrace the crowdfunding model and setting up campaigns to tap into this trend." It’s only May and already 1,668 campaigns have been set up on the platform and last year charity crowdfunding campaigns raised £12.3m on JustGiving.

Jes Bailey, crowdfunding consultant and founder of crowdfund 360, believes that crowdfunding for specific charity projects has increased dramatically in recent years for a number of reasons. One is that crowdfunding has become a more well-known concept, so charities and the public are becoming more aware of what it is and what it can be used for. There have also been some really successful crowdfunding campaigns run by smaller charities, which has inspired others to give it a go. In addition, with more match-funding available this takes some of the pressure off of charities and simultaneously encourages the public to donate, because their £5 will automatically become £10. Crowdfunding allows charities to be transparent because you can see how much has been raised, and charities can keep donors informed about the impact of their donation through updates on the crowdfunding page or through regular email communications.

Crowdfunding also offers opportunities for charities to fundraise in a way that would otherwise not have been possible. According to Goode, many of the most popular campaigns are for families. Just4Kids has already raised more than £230k this year and has 75 campaigns running on JustGiving. 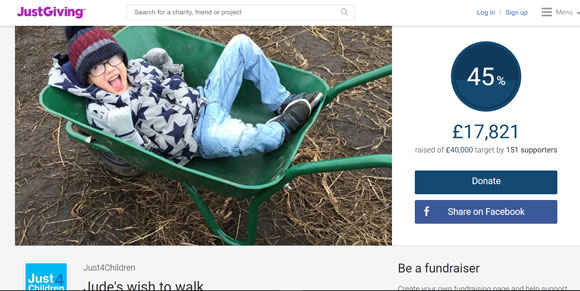 This is where the power of one really works for crowdfunding. Research shows that people are more inclined to donate to a campaign that features one person – someone they can identify with or relate to, rather than a cause. For charities such as Muscular Dystrophy UK, these individual stories have helped to raise millions for the charity and its beneficiaries.

In 2012, Muscular Dystrophy UK created Family Funds. A Family Fund is set up in a family's own name and  offers them choice over which of the charity’s projects their fundraising goes to. The charity looks after the administration, Charity Commission paperwork, accounts and agreed associated costs on their behalf, so they can concentrate on fundraising and time with their family rather than running a charity.

Catherine Woodhead, development director at Muscular Dystrophy UK, says: "We have found a unique solution to what could be a potential problem for umbrella charities such as ours. We are a charity that supports people living with 60 different types of muscle-wasting conditions, so it’s important that families are able to fundraise for research into their specific conditions."

Since their inception, the 65 Family Funds have raised more than £2m for the charity. "It’s a magnificent amount and has allowed us to fund research we couldn’t have done without their support, a way of really working together with families to achieve a common goal."

Family Funds have really take off in the past couple of years, no doubt in part thanks to the increasing popularity of crowdfunding. Woodhead believes they’ve been so successful because they allow families to fundraise in their own names and with their own stories, which really captures the attention of the local audience. They also help people know they are doing all they can to help change the landscape for their conditions.

"By empowering families to fundraise in this way, we have ensured that their efforts are combined to have a bigger impact."

With millions being raised through crowdfunding campaigns, isn’t it time your charity got on board?