Nectar announced on Tuesday on its social media channels that the Daily Mail had joined as a brand partner and that people could start collecting Nectar points when buying the Daily Mail and the Mail on Sunday. The company didn't expect what happened next. Or did it?

Very quickly Nectar's followers on both Facebook and Twitter made it very clear they were unhappy about the partnership, citing that the newspaper funds hate. Many posted photos of their cut-up Nectar cards in protest. How Nectar handled this social media PR crisis is a lesson to us all in what not to do. 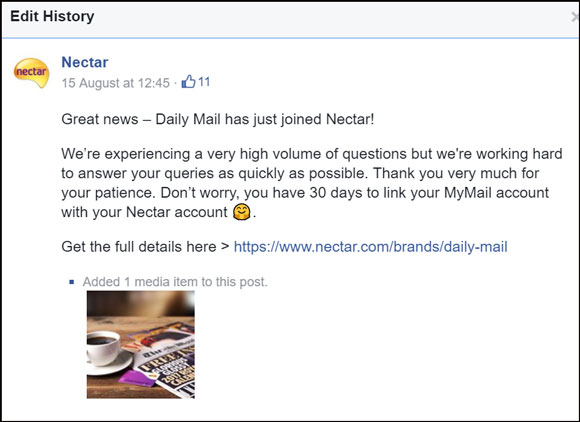 Here’s how charities can ensure that they are prepared if ever they face a social media backlash.

Nectar claims its data shows that its customers buy the Daily Mail and Mail on Sunday and that may very well be true. It is, after all, the most-read paper in the UK, according to the latest National Readership Survey. But people who buy the Daily Mail are not necessarily its social media audience. Nectar has over 500 brands as partners, such as Sainsbury’s, Debenhams, Sky, Asos and Argos, which means a diverse audience.

Prior to the announcement, the Nectar social media team should have set up listening feeds to gauge how their audience may have felt about the newspaper. This would have given it insight in how to announce the partnership on social media in terms of tone of voice or whether to even announce it at all. As its editing history on its Facebook post shows, they initially got the tone very wrong.

It does seem unbelievable that Nectar didn’t prepare a number of various responses for the announcement as it must surely have realised there would be some backlash. Its initial responses were perfunctory at best and the same stock reply to everyone. As you can see from the Facebook post edit history, Nectar edited its response seven hours later to add in a bit more of an explanation. I can only assume the reason this took so long was due to getting it signed off by someone senior. 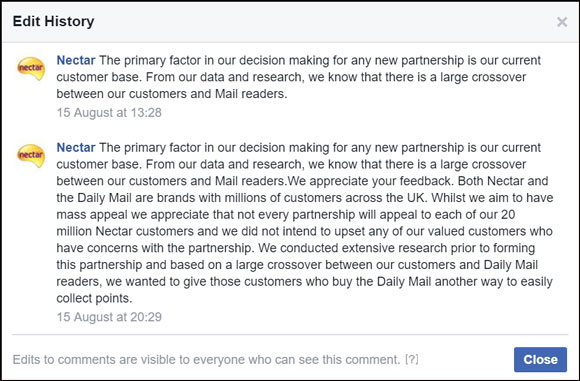 Make sure you have anticipated every (feasible) question you may receive and prepare responses in advance that are signed off and ready to go. Ensure that you have versions of the same response so as not to be accused of simply cutting and pasting. Of course, there may be a situation that arises that you didn’t envisage so make sure you know who the person is to escalate to and that they are available.

Jacqui Darlow, head of digital at Dogs Trust, offers this advice. "We often prepare an internal Q&A for a major project or announcement so we are prepared for the questions that may come up. We also ensure we have a shorter Twitter-friendly version of all the answers that can be easily be used online.

"This ensures all the contact points have the same message and we are able to respond quickly. For example, our recent TV advert featured floating balloons and we knew that it would be a bit contentious so we ensured we had all the responses ready as well as a behind the scenes video to share to show that no balloons were actually released during the filming of the ad. Having all this in advance of the advert airing meant we could respond quickly and avoid a Twitter storm."

Learn and move on

Let’s face it, social media crises and PR storms do blow over. Will Nectar lose customers? Certainly. Will it be enough to actually damage the brand? Probably not.

In 2012, Mind faced a social media crisis when they got into a Twitter spat with journalist India Knight after she wrote a column for The Times on the number of celebrity memoirs coming out in time for Christmas that spoke about their mental health issues. She claimed that depression has no stigma. Mind and their supporters naturally tweeted their outrage and things escalated quickly. It got a bit ugly. But then? It passed and everyone moved one. Lessons were learnt though. Mind’s digital manager at the time, Taryn Ozorio, wrote a great piece for CharityComms on five tips to manage a social media crisis.

Whether you are a team of one or five, don’t face the crisis alone. Unfortunately, with social media as a real-time means to vent anger and outrage, this can feel like its directed at the person who manages the social media accounts and not the brand itself. People quickly forget that there is a person handling their questions/outrage and not a ‘brand’. If you are feeling overwhelmed, seek help from a peer – even if only to talk and destress.

If anything good could come of this, then surely it’s the opportunity to donate Nectar points to charity. Perhaps it’s time to get tweeting.