Kirsty Marrins: My Oxfam - one month on and have I changed my mind?

When people can control the heating for their home from their smartphones, has Oxfam simply tapped into such behaviour, our columnist asks

Last month I wrote about the newly launched My Oxfam, the mobile app the charity hoped would bring new and existing supporters closer to the cause and would address the issue of transparency in the sector. I questioned the need for an app, given the statistics on downloads and retention. One month on, have I changed my mind?

One of my criticisms of the app was that it seemed to have too many objectives – sign up for alerts to emergency appeals, donate, see your giving history, shop online and so on. Matt Jerwood, head of digital fundraising at Oxfam, has clarified that the objectives of the app are twofold: that it creates transparency about the impact of Oxfam's work and how it spends donors’ money; and that it puts control firmly into the hands of the supporter by allowing them to amend their contact preferences whenever they like.

According to Jerwood, the charity’s supporters expressed a hunger for greater transparency and control, and those were the problems the charity was trying to address. The fact that the solution ended up as an app is superfluous, he says.

"With My Oxfam we were truly careful to avoid the ‘build-it-and-they-will-come mentality’ by constantly sense-checking that we’d grounded the proposition in offering a solution to a problem," he says. "We believe it’s a genuinely different way to engage in the charity space."

We live in an era where people can control their central heating and their electricity with the tap of a finger and transfer money from one account to another from an app on their smartphones. Many aspects of our modern lives are now conducted through our phones and Oxfam has simply tapped into that behaviour by giving its supporters greater control over their relationship with the charity – all at their fingertips. 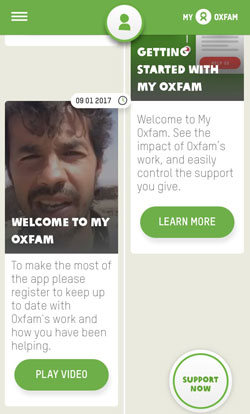 Nick Burne of the Nick Burne Consultancy, made some interesting points in a post he wrote on Medium in response to criticism from the sector (and my article), which focused on the fact that not all returns can be directly measured – brand awareness and brand positioning being examples. Oxfam is creating brand awareness simply by being on a mobile phone regardless of how many times someone opens the app. According to a study by Nottingham Trent University, the average user checks their phone 85 times a day, so just having the app’s logo on their phone is helping to keep the charity front of mind.

In this period of sector scrutiny, transparency and trust are key to retaining existing supporters and can help to recruit new supporters who wish to give to charities that allow them to see and be regularly updated on the impact their donations have made. And they don’t need to wait for an email to land in their inbox: they can access this information whenever they want by opening the app and refreshing the stories. Oxfam is positioning its brand to be at the forefront of innovative donor experience, and it’s only a matter of time before other large charities follow suit.

"My Oxfam seeks to bring people closer to the impact of their support," Jerwood says. "If we succeed in that goal we can also address key points around loyalty, acquisition, reward and usefulness. With My Oxfam, supporters are able to see the impact of their donations and have an in-pocket donation controller. We hope that these factors will simultaneously reduce barriers to initial engagement and build much deeper relationships by sharing Oxfam’s work in a more personal way.

"The app offers bite-size, video-led content from our staff and beneficiaries in the field, which we hope will reassure supporters that Oxfam remains relevant, that their gifts are supporting worthwhile work and that they are in control."

Pressed to reveal the number of downloads, Jerwood declines at this stage. But he does reveal that My Oxfam is performing slightly above forecasts and says: "We’ve seen more dialling-up than dialling-down."

Have I changed my mind about My Oxfam? I still have some reservations about retention and how it will measure an increase in trust. But I do applaud Oxfam for leading the way when it comes to transparency and making it as easy as possible for supporters to control how the charity communicates with them. Within the app, supporters can toggle on or off whether they want to be contacted by text, phone or email. With the Fundraising Preference Service coming into effect this year, this level of control will be critical.

Will other charities follow Oxfam's lead? Yes, I believe the large ones will – and by follow its lead I don’t necessarily mean by building an app but rather in finding innovative solutions to giving supporters greater control over how charities communicate with them and in building deeper engagement through transparency.