The jury is out on the potential of this move, writes our columnist

As Facebook prepares to launch its new donate tool in the UK, allowing people to donate directly to charity without leaving the Facebook platform, I spoke to charities to get their thoughts on this new feature.

All of those I spoke to were interested to see how it would work, but none were necessarily excited.

"Although I think it’s a much-needed improvement that will greatly reduce the friction experienced by supporters, I won’t be getting too excited just yet," said Dan Stobbs, marketing officer at the Sick Children’s Trust.

"The existing version, where people can donate but are directed from Facebook to the charity’s website or a third party site such as JustGiving, was lauded as a game-changer, but a month later we all looked at our metrics feeling greatly disappointed."

Based on features launched in the last year alone, It is clear that Facebook is looking to build an eco-system that keeps its users "locked in" at all times no matter what the activity – whether it’s reading a news story on instant articles or watching a video, they can do it all without leaving Facebook. But will this work in relation to giving?

"I think users have got used to jumping out of different social-media walled gardens for content, and the difficulty in converting Facebook users with a direct ask isn't necessarily about technology frustrations," he said.

"Examples such as the now-retired YouTube connection with Google Wallet suggest that donation buttons alone aren't the solution. The biggest challenge for all charities on Facebook remains publishing good, engaging content that resonates with supporters on the platform and clearly shows the impact we have."

Along with this new donate functionality, Facebook for Non-profits is set to roll out Fundraisers, where charities can run fundraising campaigns on the platform with a donate call to action appearing on all standard Facebook posts and shared posts. 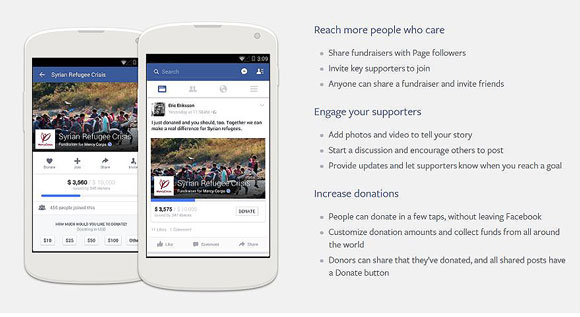 Stobbs said: "I think online-giving platforms should be worried because not only is Facebook not charging a transaction fee for donations, it is simplifying supporter journeys and giving charities more tools to help them convert ‘slacktivism’ into charitable giving.

"One problem Facebook has to solve for the UK donate functionality, however, is how to adapt its back-end processes to implement Gift Aid, because that’s obviously a major boost to donations for charities."

Both the new donate feature and the forthcoming Fundraiser element look promising. But Victoria Hancock Fell, co-founder and development manager at the education charity Team Kenya, said she was concerned that supporters might not even see these posts given Facebook’s low engagement level: the average brand engagement rate on the platform is about 1 per cent.

"For smaller charities, any help we can get to secure donations from our social followers would be a help," she said. "Team Kenya’s Facebook page has almost 1,400 'likes', but we struggle to engage our audience and very rarely have a hit on the existing ‘donate’ button. If donating via the new donate feature is quick and easy, it might encourage supporters to make small donations, but unless we had a large budget (which we don’t) to promote the button I can’t see this leading to a huge increase in donations through Facebook.

"An issue for us is actually attracting donors to our page in the first place. With Facebook’s algorithms, getting people to the page to see the donate button and click on it would be a big effort for us."

James Gadsby Peet, former senior digital services manager at Cancer Research UK and now director of digital at the branding agency William Joseph, said the development would be fantastic for fast-paced and time-sensitive campaigns such as emergency relief appeals, but not for regular individual giving.

"We think the Facebook donate button and Fundraiser will be great for those agile, fast-moving, socially driven campaigns where people want to give right then and there," he said. "Those that are traditionally focused on text donations – such as emergency appeals, viral campaigns (#nomakeupselfie, for example) or TV fundraising – will do well. It seems unlikely, however, that it’ll generate a huge amount of direct giving – we really haven’t seen those campaigns work on Facebook. People just aren’t in that context when checking up on the day’s news and their friend’s photos, and improving the user experience probably won’t change that."

And with the new Fundraising Regulator being launched on 7 July, data is obviously a big concern. Charities need donor’s details in order to build supporter journeys and to turn a one-off donor into a regular giver or supporter.

"The big question is whether charities will be able to build data protection opt-ins into the donation process or whether donations will end up as a pot of anonymous donors," Emerson said. "If it's the latter, the increase in income has to offset the potential loss of an onward customer journey, and regular income from that donor."

So although Facebook’s new donate button and Fundraiser feature look promising, charities are not holding out hope that they will revolutionise fundraising through social media.