Leadership & Governance: The career benefits of a Clore fellowship

Two senior third sector professionals, including Kate Lee, say how the Clore Social Leadership Programme helped them to become more confident and take on new challenges in their careers

With so many demands on their resources, finding the time and money to train their future leaders has understandably been a low priority for many charities.

Five years ago, the Clore Duffield Foundation, a grant maker that gives mainly to arts and heritage organisations, identified this as a problem and began researching leadership in the voluntary sector. It found that there was minimal training available for those with leadership potential and that any investment tended to be used to train those already in senior positions.

The study led to the creation of the Clore Social Leadership Programme, which has been providing training and mentoring to the leaders of tomorrow since 2010. The course lasts between one and two years, depending on whether the individual studies full or part time, and costs an estimated £40,000 to £50,000 per participant. The funding comes from charitable trusts, foundations and some corporate organisations.

Kate Lee, 40, was among the first cohort of Clore fellows - she applied for the course in 2009 and started it the following year. At the time, she was director of strategy for the British Red Cross, a charity where she had worked for 16 years since leaving university.

"I was starting to think about my next challenge, but I was a bit clueless about what direction I should take," says Lee. "I thought going through the programme would help me to shape my thinking and help me in the job I was already in."

Lee's boss at the Red Cross agreed to let her do the course part-time in the hope that she might stay in her job a few more years, but after three months she resigned so she could concentrate on her studies. "I adored my job but I wanted a better work-life balance, and I felt I was in danger of becoming institutionalised because I had been there for my whole career," says Lee. 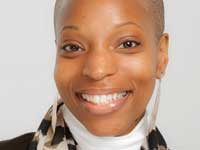 Natalie Campbell (right), 30, had already run her own retail business, worked as a broadcast journalist and sat on the boards of two social enterprise companies by the time she applied to join the Clore programme in 2010.

"I was frustrated with having a portfolio career, made up of doing lots of different activities, and I felt I had been floating for a few years," says Campbell. "Doing the Clore programme offered an opportunity to bring together the strands of what I can do and consolidate my skillset."

Students on the course - known as 'fellows' - receive tailored coaching and mentoring, complete a secondment and carry out their own research, either part time over two years or full time over a single year.

"The main thing the course gave me was confidence and trust in my own abilities," says Lee. "It also got me thinking about new leadership techniques. At the Red Cross, I knew I could deliver and I don't think I had tested how I performed under pressure. Clore made me trust my judgement."

For Campbell, following Clore's motto - "know yourself, be yourself and look after yourself" - was the key lesson she learned.

"I think it's one of the best things you can learn if you work in the third sector, because the sector can be really bad at looking after its employees," she says. "'Knowing myself' is about understanding my motivations; 'being myself' has taught me to be comfortable sitting around the boardroom table; and 'looking after myself' has been about not spending all my time working for free."

Since emerging from Clore, Lee has taken the role of chief executive at the Myton Hospice Group, where she has found ways to implement the lessons she learned from the programme.

"I knew I had to take a big job that would really stretch me," she says. "I have learned to be myself and to be authentic.

If you want your team to innovate, be confident and operate in a blame-free environment, you have to project that and play that part yourself. I have applied the lesson that it's okay to fail as long as you learn something from doing so."

Campbell has used her experience at Clore to set up A Very Good Company, which works with corporate responsibility departments in large companies to stimulate social innovation.

"The business stems from the idea that you can do good and make money at the same time - the two objectives are not incompatible," she says. "I would not have been comfortable pitching to big companies before, but now I know what my value is. Clore has given me practical skills and access to the best business minds in the country, educating me about strategy. Now I'm comfortable with selling 'good' as a concept."

For Lee, trusting herself to make the right decisions is the lasting lesson she will take with her from Clore.

"I'm now able to say 'I think I'm quite good at this' and, even though there are things I don't know, I'm okay with that," she says. "I feel as though I've been released from the hamster's wheel."

- Eighteen fellows were appointed in 2013

- Funders of the programme include Deloitte, the Esmee Fairbairn Foundation and Nesta