Initiatives to increase giving through wills have had mixed success, but the sector is increasingly optimistic about the future for this area of fundraising

Legacies, gifts in wills, bequests, lasting statements of support: the words all mean the same thing, but studies have shown that some of them are more effective than others at getting people to leave them to charity.

The same logic applies to the various initiatives launched in recent years to increase overall legacy giving. While the combined efforts of campaign groups, the government and charities have helped boost the proportion of wills featuring legacies from 12 to 15 per cent over the past nine years, some activities have had a greater impact than others.

One initiative, launched amid great fanfare five years ago, was the Legacy10 campaign. Founded by Roland Rudd, chair of the public relations firm Finsbury, the campaign produced a much-lauded report, Removing Barriers to Legacy Giving, for the Department for Culture, Media and Sport in 2012. It made 10 recommendations as to how legacy giving could be increased.

Yet four years on, some of the campaign's most ambitious proposals appear to have fallen flat. The report called for the Cabinet Office to appoint a "charities tsar" to review policy-making for the sector across Whitehall departments, and for the Charity Commission to require registered charities to provide evidence in their annual reports of legacy-giving strategies. Neither have come to fruition.

It also said that tax breaks should be given to people who pay the top rate of income tax if they make long-term financial commitments to charities. This, it argued, would create a group of high-value, lifetime donors who might later leave legacies.

But Scott Colvin, campaign director of Legacy10 and a partner at the communications consultancy Finsbury, says the tax breaks proposal was dismissed because the government was concerned that wealthy people would use it purely to cut their tax bills. He believes this was a huge missed opportunity. "It would have further incentivised people to give money to charity," he says.

Colvin says that Legacy10's call for a shake-up of the honours system to place more focus on philanthropic achievements produced more positive results. The Cabinet Office says 24 philanthropists received New Year Honours this year, compared with 18 in 2012, which he believes will encourage more people to engage in charitable service and leave gifts in their wills.

Another Legacy10 recommendation that has achieved some success was the call for solicitors to talk to their clients about legacy giving in conversations about tax planning and will writing. 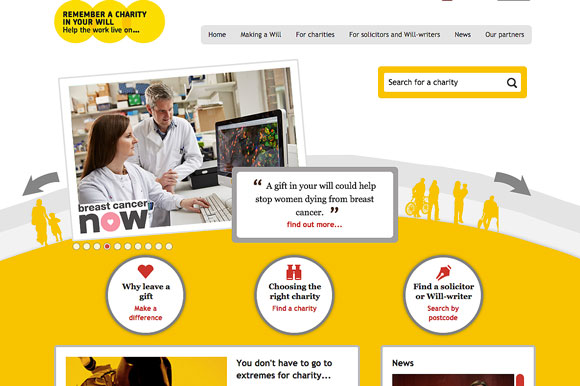 This is one area where there has been significant progress in recent years. In 2011, the legacy consortium Remember A Charity launched its Campaign Supporters Scheme, which encourages solicitors to mention to clients that they have the option of leaving gifts in their wills. In exchange, the solicitors receive the right to advertise their services on the consortium's website.

Since the scheme was launched, more than 1,000 solicitors have signed up and, as of last year, 66 per cent of solicitors mentioned charitable legacies during the will-writing process - a 13 per cent rise on 2010 levels. Such mentions do not guarantee that people will leave gifts. However, according to research carried out by RAC and Co-Operative Legal Services in 2013, it does make people three times more likely to do so.

For this reason, RAC has put its work with solicitors at the heart of its campaign. Last year it persuaded several government ministers to write to 8,700 solicitors asking them to prompt their clients. It is also currently working with the Institute of Legacy Management to tackle a perceived decline in trust between solicitors and legacy managers. It predicts that just a 4 per cent increase in the legacy market could be worth an extra £1bn to the sector.

Remember A Charity Week, which takes place every September, is another mechanism RAC has been using since 2009 to boost this growth. Alex McDowell, chair of Remember A Charity and head of community development and growth at the sight-loss charity the RNIB, says the awareness campaign, which in 2015 centred on a video about people in their seventies visiting a solicitor's office at 10,000 feet before skydiving to the ground, has been a major driver for the change in public attitudes to legacies. The percentage of people who claim to have left gifts in their wills has risen from 11 per cent in 2011 to 17 per cent, he says.

There is still some way to go, however. The government is yet to take heed of much of the substance in RAC's 2015 general election manifesto, which called for ministers to introduce a match-funding scheme for all legacies left to charities.

It also appeared to ignore RAC's claims that its long-awaited policy to remove family homes worth up to £1m from the scope of inheritance tax, announced in last year's Budget, could have a detrimental effect on legacy giving.

Yet, with charities predicted to raise £12.5bn in legacy income over the next four years, McDowell is optimistic about the prognosis for this area of fundraising. "Our research shows there are many more people willing to leave gifts in their wills than are currently doing it, so there's a really big opportunity," he says.