Liz Warner: 'Comic Relief used to be about anarchy - we need to become edgy again'

Comic Relief started in 1985 and soon became the enfant terrible of the charity world, using comedy to combat poverty and social injustice.

However, the young upstart quickly became a British institution, routinely raising more than £70m from comic capers such as Red Nose Day. But the path to beloved charity, cosily ensconced in the lounges of millions, is one the organisation should consider turning back on, according to its chief executive, Liz Warner, who took up the helm in October last year.

For one thing, it needs to stop thinking of itself primarily as a charity, she says. "We have to rearticulate ourselves as a creative agency," says Warner. "We're an organisation fighting for a world free of poverty and injustice - that still remains. But I think the unique factor about Comic Relief is that it is not first or foremost a charity, and sometimes it has forgotten that."

Comic Relief's key strength is engaging and entertaining people in a way that hooks them in, she says, and the social purpose follows on from that.

"When you go the other way around, you haven't got a USP - you're a charity like any other," Warner says. "But storytelling and the ability to leverage a mass audience is what makes Comic Relief unique."

"When you look back to the early days of Comic Relief and ask people about it, they nostalgically talk about anarchy and how it courted trouble," she says. "But it's grown up with its audience into something less edgy. That's what happens when you grow up, and for me there's a great opportunity with the next generation to engage them with slightly more edgy topics."

Warner is no stranger to controversy. She joined Comic Relief from the world of television, leaving the helm of betty, the production company she founded in 2001.

One of the company's most infamous programmes is The Undateables, a reality series about the love lives of people with disabilities or learning difficulties. The title provoked outrage before the series was first broadcast, with many arguing it was insensitive and exploitative - criticisms that died away when people saw the actual content of the show.

Warner was not responsible for the title of the show - it was bestowed on the programme by Channel 4, which commissioned it - but she says the controversy around it helped to engage a broader audience than would otherwise have tuned in.

"You wrap something up in nice silly, shiny wrapping paper, then the audience opens it up and gets punched on the nose with the purpose," she says. "But they come to it second, not first. It's much like the way Comic Relief entertains you and, when you've relaxed and opened your heart and mind and humour, they ask you."

But the social-purpose message still has to be delivered with sensitivity, she says, and although Comic Relief has a very strict policy on how it depicts the beneficiaries in its fundraising campaigns, Warner is in the process of "adding another layer" to policy, fuelled by her experience in documentary making.

Reflecting on her career as a television executive, she says: "I would do the shows that would get the ratings, but I always liked to do that and infuse it with a social purpose."

Warner grew up in Leicestershire in the 1960s and 1970s. After studying journalism, she landed a job as a reporter on her local newspaper, the Leicester Mercury, but moved to London "as fast as I possibly could" to write for magazines.

"I always wanted to be in magazines," she says. "It was very glamorous, but it was only when I got there that I realised I needed a bit more.

"When I left magazines for telly, that's when I felt I'd found the medium I'd enjoy, because it's about teamwork. There was glamour, but with a purpose." 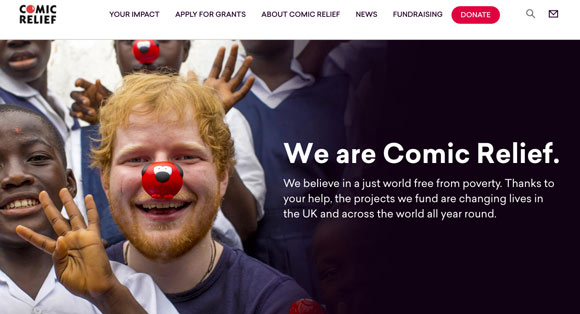 In 1998 she was appointed as commissioning editor for factual and features at Channel 4 and gave TV debuts to the presenters Nigella Lawson, Kirstie Allsopp and Gordon Ramsay, to name but a few.

Alongside her professional work, she's been a volunteer at Samaritans, dating back to her time working in magazines. At the time, Samaritans' office was across the road from her workplace and she would leave a night shift to go straight into work in the morning. She's also volunteered at her local Trussell Trust food bank and offers support to families that are considering adoption.

Feel something Engage people through humour and sport on TV or digital channels. "That's our front door; it's how we open hearts and minds," Warner says.

Do something Encourage people to act. But this doesn't have to be about donating money or baking a cake to raise cash, Warner says. "I think we can find much more involved ways for people to act in future," she says. "It might be buying something or donating their time. For example, we're in conversation with BT, asking it to donate phone time so volunteers can telephone people who are lonely and talk to them."

Come together Collaborate with corporate partners, institutions and foundations. Warner believes Comic Relief can leverage its relationship with other organisations. "I think more impact can be had than just through the money," she says. "I would like to take the charity through to not focusing all on the total but instead thinking about what we can do."

Show it works Giving honest, transparent and detailed feedback to people about the impact their donations have made. "We need to be doing a lot more to tell people the story of how progress is made," Warner says. "And when it doesn't work as expected. I think that's going to be a really interesting journey if we are able to share our learning with donors and partners so we're all learning as we go along."

If there is a common thread in her career, Warner says, it's storytelling, something Comic Relief has traditionally been very good at. But looking ahead, she says, Comic Relief needs to change how it tells its stories - and the stories it tells.

The jewel in the crown of Comic Relief's fundraising efforts is the Red Nose Day telethon, which started in 1988 and has run biennially since 1989. A major feature of the night is the running total: throughout the night, the celebrity presenters breathlessly reveal how much has been raised and urge viewers to give more. But the focus on the amount raised is unhelpful, Warner believes.

"If it's all about the total, it becomes distracting and about money," she says. "But it's not about just money. We need to think more about the impact we're having and the changes we're making to people's lives. Obviously you need as many tools as you can to make change happen, and money is part of it - but it's only one part of it, and I would really like to evolve the charity to talk about the other parts."

The charity is still in a relatively stable position compared with much of the charity sector, and has the luxury of covering its administration costs by investing donations before they are handed out as grants. But Warner isn't complacent.

"I think we're under the same stresses and strains as everyone else - it's never a given," she says. "Public giving is under pressure: everyone's got less money and all are stretched, so we have to work really, really hard and sing for our supper. We have to anticipate changes and start making them now."

One of the biggest problems is that live TV audiences are declining as the younger generation moves to on-demand entertainment, viewed on phones or tablets. The telethon, a cutting-edge way to harness technology to make money in 1988, is in danger of becoming a thing of the past.

"The challenge is finding a connection with the next generation, and that for me is the exciting bit," says Warner. "You can't just sit and wait for young people to come and care; you've got to have an audience strategy. You have to segment your audience; you've got to go and find them where they are."

Much of her focus since coming into the role has been on digital work, developing new models for engaging technology-savvy donors, who, she says, are much more demanding of authenticity, involvement and transparency than donors of the past.

The demand for transparency exposes a fault within the charity sector, she says, a fear of admitting when things have gone wrong. Charities, she says, need to be "braver" when dealing with failure.

"It's about taking people with you on the journey and saying 'that bit worked, but that bit needs correcting, so come with us while we do that'," she says.

"We need to be explaining that it's an imperfect world and it's really difficult to help people. People need to understand that there isn't a magic fix for everything."

Far from scaring donors away, Warner says, she's confident it will have the opposite effect.

"People aren't stupid - when you treat them they like they are, you lose them," she says. "I've learned that from television. There was a period when ITV went a bit end-of-the-pier and lost its audience. Then it went a bit more sophisticated and it got its audience back. I think the same is true of donors. People are intelligent and they deserve to come with you and learn about the all the details they want."

The current political situation, with Brexit on the horizon and Trump leading the US, could also prove to be a boon to the charity sector, she says, driving young people towards it.

"I think people undoubtedly want change and, in those troubled times, there are difficulties," she says. "But then you remember that Comic Relief started under Margaret Thatcher. I look at the next generation and the way they are reacting against things, and see it as encouraging that they care about poverty and the issues attached to it.

"The next generation is much more politicised and active, and I think that there's great opportunity for us to connect with them. It makes my fingers itch with the potential of what we could be tapping into."