Lord Grade: 'The old ways are NOT acceptable'

Lord Grade has been chair of the Fundraising Regulator for a year and has forthright ideas about what it should be doing. Stephen Cook spoke to the former television executive

When Lord Grade became interim chair of the Fundraising Regulator just over a year ago, many of the charities he spoke to were, he says, in complete denial about the criticism of direct mail overkill and aggressive fundraising tactics that followed the Olive Cooke case.

What made him think that? "Just conversations. People would say: 'It's not us, we behave perfectly - it's everybody else. It's other people. It's not widespread. Where's your evidence? We behave correctly. I don't know what all the fuss is about.'"

He believes the sector has moved a long way since then, not least because of the creation of the Fundraising Regulator to replace the Fundraising Standards Board, and of action such as its condemnation last year of charities that used the now defunct agency Neet Feet.

"People are beginning to examine their own approaches, and that is good," says Grade. "It isn't enough any more for charities just to get the money in. You've got to be satisfied it's happening in the right way. Ethically.

"Trustees in the old days would sit back and go 'whew!' when the chief executive reported that loads of money was coming in. Everyone went: 'Thank God for that; we haven't got to worry about it.' They never asked why they were doing so well and how they had achieved it.

"There are good agencies and one or two bad apples, and it's ever more important that trustees are sure agencies are behaving themselves and not bringing the charity or the whole sector into disrepute in their anxiety to raise money and get commission."

We're not here to stop people raising money. We're here to make sure they do it in a way that's not going to damage the goodwill of the British public.

What about a feeling among charities that the rhetoric has become too punitive and that they are now being regulated, in effect, by an enemy, as the experienced fundraiser and trainer Valerie Morton puts it in her Soap Box column?

"Paranoia," says Grade. "There's no evidence for that; it's paranoia." But isn't he, for example, on record saying that he tells door-to-door fundraisers to bugger off? "Yes. I don't want my home invaded like that. I think people resent it, and there are other ways to do it.

"But my personal views and the views of my board and the sector are possibly different things - I might be slightly more militant about it. And I would never base public policy on personal views. That's why you have a board and an executive: to calm you down occasionally."

Far from being punitive, Grade argues, the regulator is going out of its way to be consultative, not least because it has no statutory powers and relies on consent: "We knew from the beginning that we can regulate successfully only if we carry the sector with us and it has respect for what we're doing.

"Some charities complain about the endless consultations, but it's an integral and important part of creating the credibility, support and respect of the sector. Consultation is part of the education process, of getting people to understand what we're trying to do and need to do."

He thinks last year's consultation on the Fundraising Preference Service proved it was not a cosmetic exercise because it resulted in changes, including the abandonment of the so-called big red button - a mechanism, proposed in the Etherington review of fundraising self-regulation and backed by the government, that would allow people to opt out at a stroke from all communications from all charities.

People must be aware that old practices are no longer acceptable and they need to take care.

The FPS will instead allow people to specify which charities they no longer want to hear from, and the regulator will inform the charities concerned rather than requiring them to check their databases against that of the FPS, as originally mooted.

"From the beginning of our existence, in every meeting we had with any charity, the fear and worry about the FPS was tangible," says Grade. "Their fear was that the big red button, and the creation of this regulator, would seriously and unnecessarily interrupt their ability to raise funds for good causes.

"We've got to be sensitive to that. We're not here to stop people raising money. We're here to make sure they do it in a way that's not going to damage the goodwill of the British public and the good name of the sector. That's what this whole thing is about. And I think we've reached a satisfactory point as a result of the consultation and the work that George Kidd's working group did on the FPS."

But is the FPS, which will consume about half of the regulator's annual £2.4m budget, really necessary, especially now it has been so heavily watered down? Some have argued, including the Scottish Fundraising Implementation Group, that the same effect can be produced by use of the Telephone Preference Service and the Mailing Preference Service - and more charities are using opt-in rather than opt-out permissions. 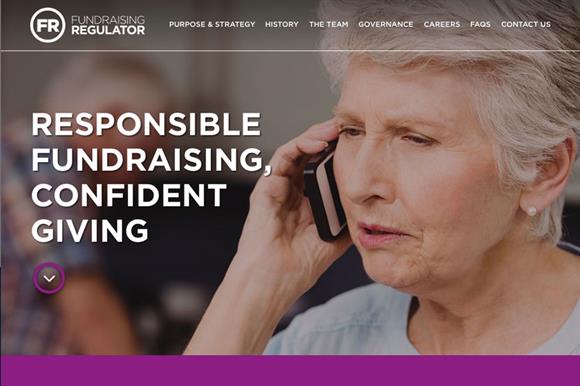 "We didn't give up the big red button without a lot of debate. If we find in the light of experience that the public are screaming for it or something similar, then we'll have a look at it. And if in the end the FPS is demonstrably redundant in the light of all the other activities, we'll be sensitive to that.

"But I don't think it is. I think it will give the public a much greater degree of reassurance that they're in control than they have had hitherto."

The contract to run the FPS is about to be put out to tender, so the service is unlikely to start until a year or more after the Fundraising Regulator began work last July, since when it has been asking charities to pay the voluntary levy that finances its work.

This entailed asking about 2,300 charities that spend more than £100,000 a year on fundraising to pay sums that range in a 10-step scale from £150 to £15,000. The requests have gone out in six batches, and half the budgeted income has already come in.

Only a handful of charities are resisting, says Grade, some of them because they think they've been put in too high a spending band. Only four of the 50 charities that were asked to contribute £15,000 to set up the regulator declined to do so, says Grade, "so if that's repeated in the levy, we're in good shape".

By the end of December, the regulator had received 439 complaints but can't say until it brings in an improved case management system how many had to be referred to charities: like the FRSB, the regulator can't entertain a complaint until the charity concerned has tried to settle it. At present, 19 complaints are being investigated by the regulator.

Grade says he thought things would be very quiet for the first six months and is "pleasantly surprised" by the level of public awareness of the regulator indicated by these relatively high numbers. He hopes awareness will grow online and through publicity about high-profile cases; but there are no plans for paid advertising, he says.

The next big task is a consultation between February and April on changes to the Code of Fundraising Practice, the stewardship of which was transferred from the Institute of Fundraising when the regulator began work. Some changes have already been made as a result of changes in the law.

Questions will include whether the code should tackle the way contracts are framed between charities and fundraising agencies: a recent Charity Commission inquiry report on Hospice Aid UK criticised its use of an agency as a consultant, thereby avoiding the legal requirement for contracted "commercial participators" to make "solicitation statements" to potential donors.

After the code consultation will come a drive to get charities to register with the regulator, thus indicating their willingness to abide by the code and giving them the right to use the regulator's logo in their fundraising materials. There will be a flat registration fee of £50.

The number of charities that have signed up for the regulator's newsletter - 3,000 so far - is being taken as an indication of how many are likely to register. "It's hard to see a reason why they wouldn't register, and in a way it's irrelevant because we are going to have jurisdiction, as it were, over their activities," says Grade. "If they're not registered, it doesn't mean we won't investigate them."

And if they don't cooperate with an investigation? "I wouldn't advise that. I don't think if you're a trustee you can justify not responding to the industry regulator. That would be pretty inflammatory and, if it were to arise - which I don't think it will - we would obviously refer that to the Charity Commission."

Finally, what does Grade think about the ruling from the Information Commissioner in December that wealth screening by charities breaches data protection law? The Charity Commission and the Fundraising Regulator immediately warned all charities to stop such screening, leaving some feeling that, having been criticised for untargeted fundraising, they are now told they can't target either.

"This is a matter for the Information Commissioner's Office, which has a new chair," says Grade. "There are endless grey areas, and my advice is that anyone in any doubt should just call the ICO or us and get guidance. There isn't one size that fits all, but the important thing is that people must be aware that old practices are no longer acceptable and they need to take care." 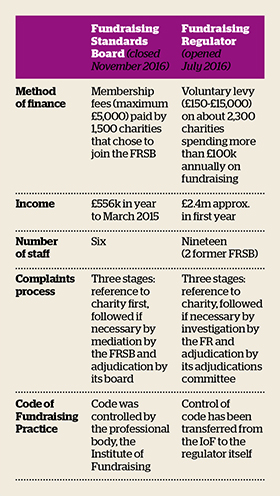 Out with the old, in with the new

The main differences between the now defunct Fundraising Standards Board and the Fundraising Regulator, both independent non-statutory bodies, are the financing system and control of the Code of Fundraising Practice.

The system of investigating complaints is essentially the same, although the stages have different names and the FR can escalate complaints to a higher level of the process at any time.

Asked why the FRSB could not have continued, adopting the new system of finance and taking control of the code, Grade says: "Not our decision - that's political. That was the view of the department, the minister and the Etherington report, so it's water well under the bridge."