The cosmetics company is aiming to raise £250,000 to support grass-roots activists and charities that work to protect freedom of expression

Lush has launched Error 404, the "bath bomb with a difference", as part of a fundraising campaign to protect internet rights.

Working with the digital organisation Access Now, the cosmetics company aims to raise £250,000 for its Digital Fund, which will be distributed to charities and grass-roots activists as part of #KeepItOn, a global campaign against internet shutdowns. Access Now claims to have documented more than 50 internet shutdowns in 2016.

"The Digital Fund will support grass-roots activists and charities protecting freedom of expression in the digital era and fighting to keep the internet free, open and safe."

When visitors click onto the Error 404 bath bomb page on the Lush website, a black overlay disrupts the page with various messages describing how internet shutdowns affect people and countries. Users are then invited to either continue to the Lush site or to sign a petition that will be delivered to world leaders, who are meeting in Mexico in early December to discuss the future of the internet. 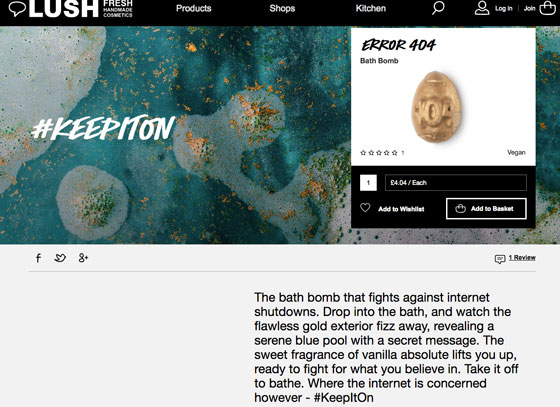 "As the internet becomes a more integral part of our daily lives, we need to protect these newly forming rights and ensure a fair and equal internet for all," said Jack Constantine, chief digital officer at Lush.

Activists and organisations from around the world are being invited to apply for grants that will range from £100 to £10,000. A panel will decide where to allocate funds and smaller organisations will be prioritised.

Organisations interested in applying for a grant can do so between 7 December and 15 January 2017.