Sadiq Khan, the Mayor of London, has launched contactless donation points in the capital to help charities combat homelessness.

Thirty-five TAP London terminals have been placed across the city. They will accept £3 donations, with the money going to 22 homelessness charities in the capital. Donation points include theatres, hotels, bars, shopping centres and two at City Hall.

There are plans to open a further 55 donation points over the winter and donations are also being accepted by the campaign’s GoFundMe page.

The initiative has been created by the TAP Foundation, a charity that aims to tackle homelessness through the use of technology. It was founded by two Londoners, Polly Gilbert and Katie Whitlock.

The charity said that 100 per cent of donations will go to the London Homeless Charities Group, which consists of:

A running total of donations can be seen on the TAP London website. 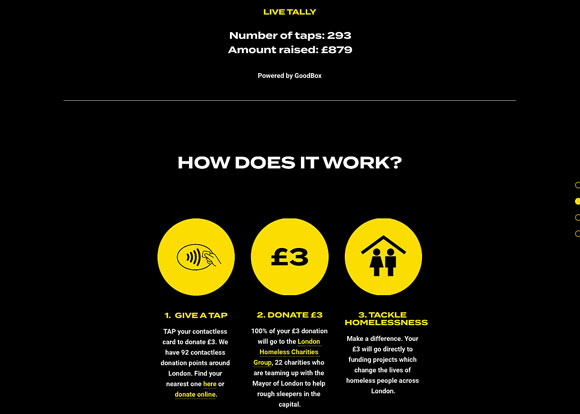 The campaign comes after a similar scheme was launched in Cardiff in March. In this, Give DIFFerently developed an interactive screen with a contactless donation point on The Hayes, one of the city’s busiest shopping streets. All monies raised went to help the homeless in the Welsh capital.

The contactless points in London are part of the mayor’s plans to help rough sleepers over the winter. His office said he had doubled the number of street outreach teams in the capital and set up a pop-up homelessness hub, which moves to a new location in areas where people are sleeping rough every month.

According to the latest figures from the mayor’s office, published earlier this year, there are 7,484 rough sleepers in London.

At the launch of the donation point at City Hall yesterday, Khan said: "Last year, Londoners’ generosity helped us raise nearly £200,000, and referrals to StreetLink went up by 45 per cent over the winter. These new contactless donation points will make a big difference in encouraging Londoners to do their part to help.

"Ultimately, we need the government to wake up and stop ignoring the fact that their cuts to welfare and support services are pushing more people onto the street. Along with councils and charities in London, we need sustained funding to help people off the streets, and an honest focus by ministers on the root causes of homelessness to end rough sleeping in London for good."

Polly Gilbert, co-founder of TAP London, said: "Our pockets are getting lighter. Many of us just don’t carry change any more, so we have to act quickly in creating new ways for people to give to those in need.

"If we each made just one 'tap' to tackle homelessness we could bring about radical change by expanding and sustaining vital services for Londoners in need."