The chief executive of Cancer Research UK took up arguably the biggest job in the charity sector last November. She talks to Rebecca Cooney about the mission, the need to adapt and keeping donors onside

When the trustees of Cancer Research UK began the search for a new chief executive to replace Sir Harpal Kumar, its leader for more than a decade, it is not surprising that Michelle Mitchell was towards the top of its target list.

Over the past decade, Mitchell, 46, has developed an enviable reputation as one of the sector’s most dynamic chief executives. During her five years as chief executive of the MS Society, its income grew from £24m to £28.9m in what was a difficult financial climate for many charities. Equally impressively, the charity managed to escape the controversies that have befallen many of the UK’s biggest charities in recent years.

Her 11 years at Age Concern and then Age UK before joining the MS Society also won her plaudits: Mitchell was one of the lead architects of the notoriously tricky merger between Age Concern and Help the Aged, which led to the creation of Age UK in 2009.

In early December, Third Sector exclusively revealed that "ring girls" were still being used at fundraising boxing matches in aid of CRUK (above), despite many other sports vowing to end the use of models dressed in revealing outfits.

The boxing matches are run by the company Ultra White Collar Boxing, but the cancer charity’s logo features prominently and the money raised from the fights goes to CRUK. The partnership has generated about £16m for CRUK since 2013.

UWCB had said in early 2018 that it would continue to employ ring girls and their male equivalents, "ring boys", despite Formula 1 racing and a number of other sports saying that they would no longer use models in revealing outfits.

But in December, after Third Sector’s article, CRUK said that it would discuss the issue with UWCB.

The story broke just four weeks into Mitchell’s leadership of CRUK. Mitchell, a former trustee of two gender equality groups, the Fawcett Society and the Young Women’s Trust, says the charity and UWCB are looking at how they will have "men and women who will be dressed appropriately", adding she’s been delighted with UWCB’s openness to discussions. "I think it’s a sensible thing to look at how this issue can change in 2019," she says.

UPDATE: After this article went to press, CRUK said the women would wear evening dress instead of revealing outfits in future.

Having emerged from the recruitment process as the victor and taken up the CRUK job last November, it seems Mitchell is wasting no time getting to grips with what is arguably the biggest job in the charity sector.

Luckily, she has always been "very comfortable" in large organisations, she says. Nevertheless, connecting with the huge and diverse range of people involved in a charity with an annual income of £634m, 4,000 employees and 47,000 volunteers requires "great organisation and determination", Mitchell says with a wry smile.

"We need all those people’s perspectives because no one person is going to tackle cancer," she says. "Only through very different people making vastly different contributions will we make progress."

CRUK’s overall goal is to bring forward the day when all cancers are cured, says Mitchell. But such an ambitious target remains some way off given that cancer kills about 450 people a day in this country, according to CRUK, and one in two people will be diagnosed with the disease in their lifetime.

With that in mind, Mitchell says that in the short term it will focus on the "audacious" goal of three out of four people surviving cancer for more than 10 years by 2034. To do that, the charity has to be prepared for change.

"While we’re clear on our mission and our purpose, we anticipate that we’ll have to adapt, pivot and be agile because the external environment we’re operating in doesn’t feel like it’s going to be a steady state."

Collaboration, rather than control, will be how charities create value in the coming years, says Mitchell. For her, this means collaboration with supporters, staff, beneficiaries and each other.

"I think you can achieve big change through small organisations and large ones, but the common thread between those things is collaboration and partnerships," she says.

As well as working closely with partners such as research institutions, pharmaceutical and biotech companies, the NHS, and corporate and media partners, Mitchell says she wants to put collaboration within the organisation at the heart of her role.

"I really strongly believe in collaborative leadership and the ability of people to come together and create change," she says.

Her priorities include making the public aware that their support is already making a tangible difference and saving lives. Another, she says, is "thinking carefully about how people want to engage with us and what kind of relationship they want with us".

Two years ago, CRUK took the bold move to go "opt-in only" with its fundraising communications before the introduction of the General Data Protection Regulation in April 2018. 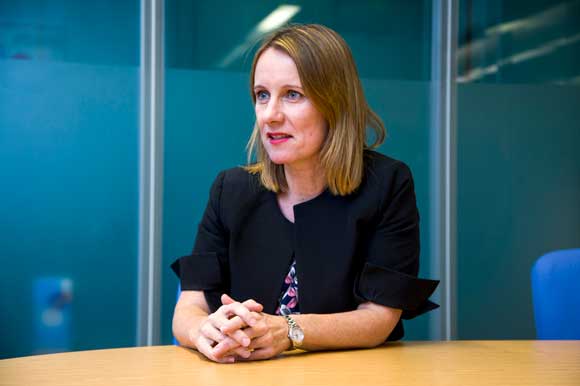 At the time, the move was greeted with a degree of scepticism by some seasoned fundraisers. Mitchell concedes it has been "challenging" from a financial perspective and has particularly affected mid-value giving, but she believes it was the right thing to do and will result in better relationships with donors in the long term.

Last year, £423m of CRUK’s £634m income was voluntary, mainly in the shape of donations from the public, most of whom gave £10 a month. Mitchell enthuses about how this represents an "amazing movement of individual people", but is aware that it’s wise to be prepared for change.

Charities, she says, need to acknowledge that tomorrow will look very different from today, which is a challenge for some in the sector. "I think people are going to need to diversify their income and look at a range of income sources, particularly earned income, social investment and product innovation around fundraising," she says.

Innovation will become increasingly important. "Trialling and testing – that’s the way to change," she says. "You’ve got to work out whether it works or not, rather than having a grand plan and investing a huge amount of money in it, only to realise it was the wrong thing."

Technology has a role to play too, Mitchell says. The organisation needs to look at how data, digital technology and artificial intelligence can help people to engage with it, as well as supporting its research – not least because donors themselves will be harnessing the power of data technology to inform themselves and self-manage their fundraising.

That new thinking will also extend to more charities considering consolidation, she says. The Age UK merger she was part of led to the loss of about 300 jobs, but saved it an estimated £10m a year. "I do believe there are still opportunities in some parts of the sector if the needs of beneficiaries are at the heart of it all," she says.

Charities have to be open to looking at their business models and their impact, and working out how to improve them, she says. That’s where being close to your community really helps, Mitchell says, because you can pick up on their insights and adapt.

Like most people, Mitchell has had a personal connection with cancer. Two of her aunts died from the disease and she watched her mother nurse one of them throughout her illness.

"That was hard," she says. "Especially since cancer was talked about with fear in that generation – it was ‘the big C’."

Having a personal interest in the cause was one of the factors that motivated Mitchell to apply for the job. But as someone who describes herself as "really motivated by social change", she was also attracted by the opportunity to influence and lead change at such a huge scale.

"Being able to positively affect millions of people, not only here in the UK but also across the world, seemed to me quite a good reason to go for the job,"
she says.

Mitchell started out in politics as an adviser to the late Labour chief whip Donald Dewar, the former MP for Glasgow Anniesland. She then became head of the parliamentary unit at the electoral reform campaign group Charter 88, which she says "ignited a sense of purpose" in her.

But she felt she could achieve more in the charity sector than in politics, so took up a role as government affairs adviser at the children’s charity the NSPCC.

"I started off in public affairs and communications, but I think one of the things I did quite quickly was to combine that with a strategy role," she says. "Being able to set the direction and also engage and communicate with everybody who matters to your causes is a combination of skills that is increasingly being sought after in leadership roles."

She’s never been afraid to be hands-on as a leader either. In 2016, she ran the London Marathon in aid of the MS Society despite not being a regular runner.

"It was quite a challenging goal because it was nought to 26.2 miles for me," she says. "But it does give you great confidence, because you think ‘if I can do that, I can do anything’."

She has no plans to repeat the feat for CRUK, but in January she will spend some time behind the till of her local CRUK charity shop.

There are some important principles the sector needs to "hold very dear", Mitchell says. For CRUK these include "collaborating with all of those who make us able to achieve our goals quicker, beginning to share some of the learning and knowledge that we have more widely in the charity sector, and to ensure others can benefit and use what we’re doing".

Ultimately, she doubts there is going to be "a silver bullet" that will help the sector deal with what she believes will be a "persistent period of turbulence and change".

But what is for certain, she says, is that "only those that are closest to their beneficiaries will know what’s needed and those with the strongest trustee and executive leaders will be able to adapt and make the most of the opportunities that are available".