Poll by the microfinance provider Oikocredit says one in ten gives once a week, but 17 per cent do so less than once a year

One in 10 people say they give to charity once a week and 47 per cent say they give at least once a month, according to a survey by microfinance provider Oikocredit.

But 17 per cent of people say they give to charity less than once a year.

The survey, which examines the importance of transparent investment to donors, is based on a poll of 2,016 people across the UK.

Donating items to charity shops and buying items from them, as well as gifts of money, have been counted as charitable giving.

Older donors give more frequently, with 13 per cent of over-55s giving weekly and 59 per cent giving at least once a month, compared with 7 per cent and 32 per cent respectively among 18 to 34-year-olds.

Donors in London are the most likely to give weekly, at 15 per cent; those in Yorkshire and Humber are the least likely to do so, at 8 per cent.

North-west England is home to the least generous individuals, with 21 per cent giving to charity less than once a year and 10 per cent never giving. 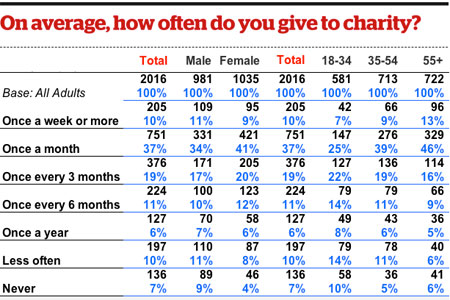