Who needs an office anyway?

As rental prices continue to rise for many charities, Liam Kay looks at the alternatives to the traditional workspace

When Navca, the local infrastructure body, was given a couple of months’ notice to vacate its Sheffield offices at the end of last year, staff could have been forgiven for fearing the worst. But a few weeks later, not only had Navca found a new, smaller office, but it had also completely changed its working practices to fit its role as a national representative body for the charity sector.

The result has seen its office costs shrink by more than 50 per cent through a greater focus on remote working. "We were an almost entirely office-based organisation," says Jane Ide, chief executive of Navca. "We have switched it around completely so that we are almost 100 per cent remotely mobile. We do have a very small office, but it is more for administrative purposes and giving us a place to come together for meetings than to house the team."

Navca’s experience highlights the benefits of tailoring your workplace to fit your
charity’s mission, and has the potential to save substantial sums of money in the process.

In a world of constrained funding, property costs can be burdensome. In 2016, the Ethical Property Foundation’s Charity Property Matters survey found that charities spent £125,000 a year on their properties on average. Forty-three per cent of respondents had encountered unforeseen property costs and 45 per cent said they felt that property was the biggest risk to their organisation.

But there are many ways to reduce property costs. One option is to share space with other charities. CAN Mezzanine, a social enterprise, has four offices in London: Borough, Old Street, Hounslow and the City of London. Gary Phillips, director of sales and marketing at the organisation, says its rent charges are about 15 to 35 per cent less than in the private sector. Furthermore, its rent increases have been at 2 per cent a year, while commercial rent prices have ballooned by 10 to 45 per cent in the past few years, he says.

CAN offers fully serviced offices on a per-desk price and allows charities to change the number of desks they rent depending on their needs, giving them flexibility to cope with fluctuations in work or income. Security, maintenance and management of the building are CAN’s responsibility. Phillips says that CAN has tried to reflect the shift from stationary fixed desks to more mobile and flexible ways of working at its properties. 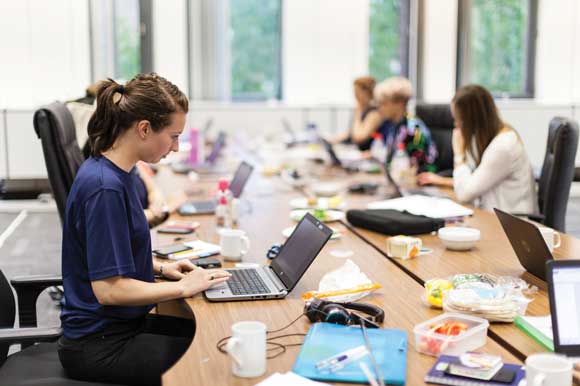 "A few years ago, people wanted massive desks with huge storage cabinets, massive pedestals, huge PCs and massive printers," he says. "Now we are seeing people moving to laptops and 1-metre to 1.2-metre desks. Where we used to offer about five square metres per desk, we are offering only three or four now. So it gives people the opportunity to take the same amount of space they would normally have taken, put more people in and get more value out."

CAN has also taken on many charities that have been forced out of privately rented offices as companies focus on re-using offices as residential spaces, which can be far more lucrative. "I would estimate that 25 to 30 per cent of organisations that have moved into our buildings over the past year have been thrown out by their private landlords," says Phillips. "In some cases weeks, a month or maybe a couple months and a fait accompli that they have to go."

Christopher Allen, head of workplace at the office design firm Morgan Lovell, says charities should have strategies in place for how their offices can help to deliver their missions. For some charities, especially those that work closely with government, that can mean accepting the need to be based in central London or to have a permanent office as a base. For others, remote working, joining a charity hub or moving to offices located outside the capital could be more beneficial.

Adopting a more flexible style of working can bring many benefits, according to Allen. These include helping to improve productivity and an improved work-life balance for the staff.

"You have to spend some money to get your working environment, technology and management practices up to speed," he says. "For charities, that can be quite difficult."

Charities that own their buildings also need to ask whether they could use it to
generate income by renting out space or opening a café or restaurant, says Allen.

Ide says the most important thing is to have a solution that works for the charity. "Be prepared to think creatively and challenge your own thinking about what your organisation has to have," she says. "You are not going to lose anything by challenging your own thinking."