The neighbourhood project that became a 'have-a-go' housing developer

The deal was that the project would coordinate the building of environmentally friendly social housing and use its share of the proceeds to fund its services.

Two years later, one of the most deprived neighbourhoods in the country had 68 eco-homes available at affordable rents. It also had several more acres of green space for public access and community projects to add to SLNC’s existing allotment and environment projects.

Neil Hodgkin, chief executive of SLNC and the motive force behind the project, has mixed thoughts as he walks round what has been lauded as one of the largest developments of energy-efficient Passivhaus homes in Europe.

He’s proud of SLNC’s entrepreneurial drive and his five-year fight to gain approval for the multi-award-winning initiative. "We’re have-a-go heroes," he says, self-mockingly.

He’s also pleased to have negotiated a £500-a-year ground rent for each house, providing a steady, no-strings income for the community project.

But he wishes more of the rental income from the houses went to SLNC and other projects in the neighbourhood. He also wishes that more of the homes had been rented to people from the neighbourhood, pointing to the number of expensive cars parked outside the new properties. Official statistics confirm that most households in the immediate area don’t have cars.

Sir Peter Soulsby, mayor of Leicester, does not have any such regrets about the council’s involvement in the project.

"It’s brilliant," he says. "It ticks so many boxes: it’s good for homes, good for the environment and, most importantly, good for the community and its self-esteem."

Soulsby believes it was right to take a risk. "We’ve got to be innovative where conventional approaches to working with the third sector are no longer available to us," he says.

The eco-homes were expected to cost about £11m to build, of which SLNC raised about £2.4m through the government’s Community Right to Build programme. Hodgkin initially wanted SLNC to own the houses and therefore have the security from regular rental income. 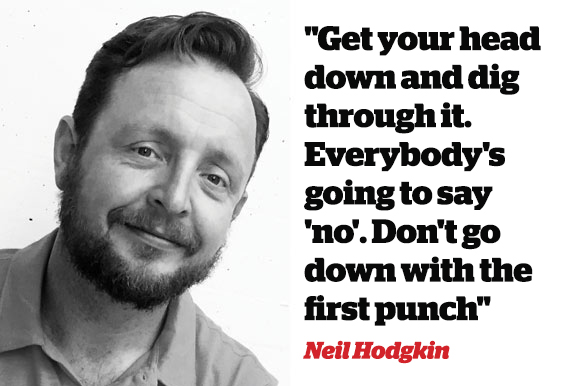 "I’m so glad we didn’t," he says. "The project went £1.5m over budget. The land clearing was a nightmare. They found Japanese knotweed and wells that weren’t on the maps."

Delays added months to the project, which led to the costs mounting.

As a community worker and trained social worker, Hodgkin can be surprisingly hard-headed with business dealings, which are the source of some of his regrets.

"We made it too nice, from a commercial point of view," he says. "We could have done 100 units on that site. People in social housing don’t want big gardens. And the car parking is too generous."

He also sighs over a failure to get extra ground rent for an electrical sub-station on the site. "We’re nice guys," he says. "Too nice."

The project provided Hodgkin with a rapid lesson in financing. The concept of needing another loan to pay the interest on the original millions already borrowed was new to him. He says social lenders "were sniffing round us like sharks". He was unimpressed with their 6 per cent terms, saying he could borrow from mainstream banks for less.

He recommends dealing directly with developers, which he says make a refreshing contrast to the other partners and their many agendas.

"The developers are out to make a profit," says Hodgkin. "There’s no issue about that. They all turn up in very shiny cars with very expensive watches. But you know that, which means you’re not looking at something else they’re trying to do."

Hodgkin says SLNC’s ambitions are now bigger and better. He plans to build another 40 houses on the cleared site and possibly another 80 on nearby land. This time his intention is not to sublet the land to a housing association, but to register as a social housing provider, own the houses and use rental income to fund community services.

Yet he is well aware that this vision could severely affect the business model. "Can we really spend millions to let houses to people who are so poor that their first priority might not be paying their rent?" he asks.

SLNC is moving ahead with the plans anyway. Hodgkin says it has applied to the government’s Community Housing Fund for £150,000 for costs involved in the pre-development stage of a housing project.

"Running 120 houses is not going to be easy," says Hodgkin. He would rather not do it. He wants his staff focused on what they are there for – to provide front-line services: welfare benefits and debt advice, drugs, sexual health, pregnancy counselling. But the funds are drying up.

Hodgkin says he is not a gambler, but he takes calculated risks. He operates smaller-scale social enterprises and knows their limitations.

Any doubts about the new housing project are dispelled by the urgency and the lack of options: "It’s not a good thing or a bad thing. It’s the only thing to do.