New data from the 'shrinking sector'

Recent cuts to government spending on the voluntary sector are quantified authoritatively for the first time this week in the latest edition of the National Council for Voluntary Organisations' UK Civil Society Almanac, which draws its figures from a database that was set up jointly with the Third Sector Research Centre.

In 2011/12 - the most recent year for which comprehensive figures are available - voluntary sector income from local and central government dropped by £1.3bn, down by 8.8 per cent in real terms on the previous year. As a result, the sector's total income fell by £700m to £39.2bn, a drop of 1.7 per cent in real terms.

Most significantly, spending by the sector also fell by £450m to £38bn in real terms: this is the first time since the NCVO started collating the figures in 2000/01 that both income and spending have fallen in the same year.

"There were the good years until 2007/08 and then the downturn hit," says David Kane, senior research officer at the NCVO. "Income fell, but not from government. At that time, the voluntary sector managed to maintain its spending by dipping into its reserves and grant-makers were keeping up grant-making.

"But there was also a sense that you could only do the counter-cyclical spending for so long. Then, for the past two years of our data set, spending has fallen and now income has also fallen. It's now a shrinking sector in terms of what it's getting in and what it's able to spend." 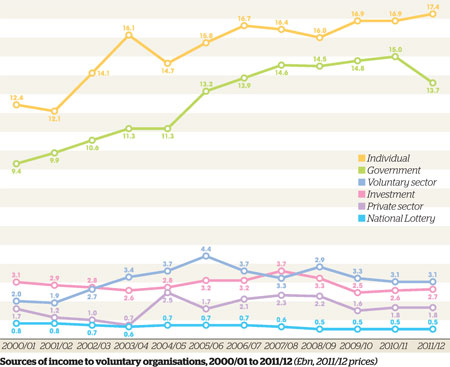 Income from individuals rose to a record high of £17.4bn, compared with £16.9bn in the previous two years. This figure contrasts sharply with the UK Giving survey carried out by the NCVO and the Charities Aid Foundation for the same year, which indicated that giving was down by 20 per cent and the mean donation had fallen to £27 per donor - its lowest level since 2004.

Kane attributes the difference to how they are collated. "UK Giving is a survey of individuals, based on their recollections, and it covers a wide range of activities, such as giving to hospitals," he says. "Our figures are based on charity accounts. It's not unusual for the two numbers to be different."

Major voluntary sector organisations with annual incomes of more than £100m were the main recipients of government money in 2011/12: 39 per cent of them received income from this source. Micro (less than £10,000) and small (£10,000 to £100,000) organisations were the least likely, receiving 4 per cent and 17 per cent respectively from government sources.

The almanac also shows that charities have had to become more entrepreneurial to generate their income. Of the £21.3bn of earned income in 2011/12, £17.8bn came from charitable trading activities such as rent for accommodation and fees from training courses. A further £4bn was generated by trading, including the sale of donated goods in charity shops.

"There has been a long-term shift in getting earned income from individuals," says Kane. "Charities are having to become more enterprising and sell more of their services."

Government spending cuts have affected some charitable cause areas more than others. Charities working in social services have experienced the biggest loss in funding - collectively receiving £361m less in 2011/12 than in the previous year. Education and training charities experienced the second-biggest fall - receiving £233m less in 2011/12 - and environment charities the third, losing £113m. But funding for international development charities rose by £105m because of the government's decision to ring-fence the overseas aid budget.

The almanac shows that spending cuts across all sectors have been deeper than the worst-case scenario predicted by the NCVO last year in its report Counting the Cuts (see page 12). The NCVO predicted that government spending on voluntary sector organisations would fall to £13bn if a disproportionate level of cuts was passed on to the voluntary sector, but actual spending in 2011/12 was even lower than that at £12.7bn.

The NCVO also predicted that state funding for the voluntary sector could fall to £11.8bn by 2017/18, but the almanac says it will revise that figure in line with the new data. Charlotte Ravenscroft, head of policy and research at the NCVO, says that the message for charities is that they need to broaden their sources of income.

"It's important for them to think about new ways of generating income and accessing contracts by, for example, working in consortia," she says.

Voluntary sector organisations continue to keep a tight rein on their fundraising costs, according to the almanac, spending about 11 per cent (£4.3bn) of their total income on generating funds in 2011/12. Charities have consistently spent between 11 per cent and 12 per cent on fundraising costs since 2008/09.

But the figures also raise some concerns about the financial health of the sector. They show that its combined reserves were £48.8bn in 2011/12, a drop of £2bn on the previous year. The figure is more than £8bn higher than the reserves held in 2008/09, when the financial crisis stuck, but means that operating charities on average now hold only just over eight months of reserves.

"Some organisations will have no reserves and many more will be getting by on very low levels of reserves," says Kane. "The figures show a lot of organisations in an unhealthy situation."

The almanac also analyses voluntary sector borrowing for the first time in a decade. It shows that the sector had about £4bn in outstanding loans in 2011/12, compared with £2.4bn in 2001/02. More than 25 per cent of charities are now borrowing money to fund their work, compared with 21 per cent in 2001/02. "The loans aren't as high as perhaps would have been expected, given the changing ways in which the sector is financing its activities," says Kane.

The data on the sector's workforce paints a mixed picture. On the one hand, the sector was employing 800,000 people in 2011/2 - the largest number since the almanac began; on the other, there are questions about the quality and pay of some of the roles. A total of 291,000 people now work part-time and 508,000 work full-time, which means that the sector has a higher proportion of part-time workers (36 per cent) than both the public (30 per cent) and the private (26 per cent) sectors. But about one in five part-time workers in the voluntary sector say that they are working part-time because they cannot find full-time jobs.