The Don’t Wait Until You’re Certain campaign urges the public not to ignore that niggling doubt about a child’s safety, because  new figures show most people wait over a month before picking up the phone. The campaign centres around a video called Stuff Kids Say, featuring children asking funny questions such as "do mummies teach babies to laugh or do they already know how to do it?" After a while, the comments they make become more sinister, including "I was a mistake; everything's my fault". 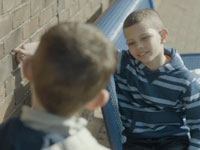 In 2011 almost 45,000 people in the UK contacted the NSPCC with concerns about a child. A new report from the charity’s adult helpline service found that 56 per cent of people whose call to the NSPCC was about an issue so serious it resulted in a referral to social services or police said they had been concerned about the child for at least a month. Over a quarter had waited at least six months to report their concerns.

The viral will be seeded on YouTube, Netmums, Twitter and Facebook, where supporters will be able to donate their Facebook statuses to the campaign for a week. The NSPCC will also be holding a 12-hour ‘day in the life of the helpline’ event on Twitter, with live updates and interviews from 8am until 8pm.

Who’s helping to promote the campaign?

The campaign is being launched in partnership with parenting website Netmums and Amanda Boyle, the director of the TV drama Skins and the feature film Billy Elliot, who has created the viral element of the campaign. TV presenter Kate Garraway and Cosmopolitan magazine's psychologist, Dr Linda Papadopoulos, are also backing the campaign.

The campaign uses the popular topic of funny things kids say to communicate a more serious message. The hard-hitting video starts out in a light-hearted way, but increasingly becomes more harrowing. The film is well acted and professionally put together. By seeding it online it will increase the campaign's reach, while signing up celebrity support will add to its appeal.