The homeless charity House of St Barnabas has launched a fundraising campaign that involves selling a selection of crumbling typefaces found on Soho streets that have been recovered to be sold online as a collection of display fonts.

The social enterprise, which is also a private members club in the famous area of central London, aims to use the funds from the Lost & Foundry campaign for its Employment Academy, a programme that works with people who have been affected by homelessness and support them into long-term work. 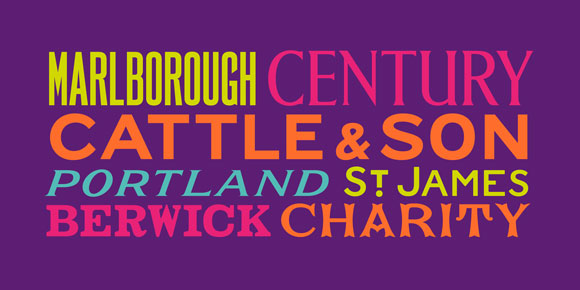 The seven fonts were developed by Fontsmith, MC Saatchi London and Line Form Color and taken from signs around Soho. Each one was named according to the specific content or location relevant to them, such as Berwick, Cattle & Son and Marlborough. Hand drawn by designers at Fontsmith, the designs are now available to buy, with prices starting at £70 and all proceeds going to St Barnabas. Licences are available for design studios, websites, small business, apps, gaming, epublishing and web-to-print options.  Buyers will also receive free membership of the club for a month.

One of the fonts is FS Charity, which was found on the House of St Barnabas in ceramic tile and is described in a blog on the Fontsmith website as "a true Tuscan letterform".

Sandra Schembri, chief encouragement officer at The House of St Barnabas, said: "We’ve been operating as a social business and charity since 2013 and are proud of our innovative model, which helps to support people affected by homelessness back into lasting work. But for us to keep supporting people in this way, we need to keep innovating too. Lost & Foundry is the culmination of a unique partnership between the charity, M&C Saatchi and Fontsmith, which taps into Soho’s history, creativity and originality to help us raise vital funds and support more people back into paid work."

Justin Tindall, chief creative officer at M&C Saatchi, also acknowledged that smaller charities needed to find an edge to get the money for their missions.

The fonts will also be available to buy at a launch event on 10 July.