Many charities have still not adopted the National Council for Voluntary Organisations’ recommendations on publishing senior pay, and charities with annual incomes of less than £10m are performing particularly poorly, a Third Sector study indicates.

The NCVO published its recommendations into senior executive pay in charities in April 2014 after an inquiry was held following a number of negative stories in the national media over levels of pay.

The inquiry’s recommendations inclued that charities with annual incomes of more than £500,000 a year should go beyond their legal requirement of reporting the number of staff earning more than £60,000 a year in salary bands of £10,000 and instead publish the actual salaries, names and job titles of their highest earners in their annual accounts.

Sir Stuart Etherington, chief executive of the NCVO, told Third Sector he was worried that many charities were falling short of the public’s expectations and it was becoming increasingly hard to defend charities being less open about top pay than many publicly listed companies. 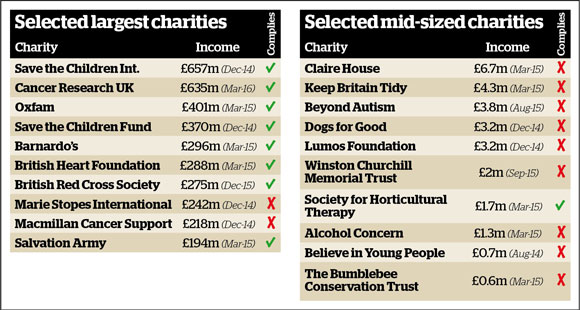 Cancer Research UK, which had not complied with the recommendations when Third Sector carried out its research, has since published its annual accounts for the year to the end of March 2016, which include the job titles and precise salaries of its top earners, although the individuals are not named.

The two that did not release their senior executive salaries in their accounts were Macmillan Cancer Support and Marie Stopes International.

A spokeswoman for Macmillan said: "Our trustees reviewed the recommendations set out in the NCVO’s guidance on remuneration and agreed that the way Macmillan currently reports senior pay provides openness and transparency for our donors."

Of the random sample of the charities with annual incomes of less than £10m examined by Third Sector, only one – the Society for Horticultural Therapy – followed the NCVO’s recommendations.

The other nine (see table above) followed the legal requirement to publish salaries of above £60,000 a year in bands of £10,000.

Of those nine, most of the charities that responded to a request for comment said they were either considering integrating the NCVO’s recommendations into their next set of accounts or already in the process of doing so.

Etherington told Third Sector: "It is unfortunate that we have seen limited progress on these recommendations. I think charities need to consider carefully whether they are meeting the public’s expectations in this area. I worry that many are falling short," he said.

"It feels increasingly hard to defend charities being less open on remuneration than many public sector organisations and publicly listed companies. The recommendations constitute a simple way for the sector to demonstrate that we are living our values of transparency and openness."

The study will be published in the July/August edition of Third Sector, out today.