Pay for charity chief executives has been stagnant for three years, says Acevo

The salaries of charity leaders have remained roughly static for the third year running, according to the annual pay survey by the chief executives body Acevo.

Seb Elsworth, director of strategy at Acevo, praised chief executives for "admirable restraint", but said the survey contained worrying findings about the level of investment in professional development.

Sixty-one per cent of chief executives said that they didn't have any personal development plans in place and a quarter did not receive an appraisal. 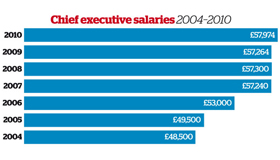 "There is a concern that professional development is being neglected when chief executives have to lead the sector through a difficult time," said Elsworth.

Charity chief executives earn almost £30,000 less on average than their public sector counterparts. Elsworth said the fact that charity bosses' earnings were relatively modest meant it might be a good time to educate the public about the need for charities to pay decent wages, particularly amid widespread concern about 'fat-cat' private and public sector pay.

"At some point we have to burst the bubble and tell people that charities are not run by volunteers, but by professionals who earn £57,000 per annum," he said.

The highest salary - £158,000 - is paid to a London-based professional association leader.

It also revealed that male bosses earn almost £7,000 more than female ones, and people with disabilities, non-Christians and people from black and ethnic minorities remain under-represented at leadership level.

The report also highlights governance standards as a key area in need of improvement.

The survey, which was completed by 140 charity chairs, found that although 84 per cent of organisations say they are implementing the sector's code of good governance, less than half of chairs conduct a board appraisal. "Board appraisal is a critical part of evaluating and improving board performance," said an Acevo spokesman.

David Fielding, who leads the not-for-profit practice at recruitment company Tribal, which helped to produce the report, said: "Organisations really need to make sure they have their houses in order. Strong governance will be critical to many organisations' survival."