A Place on the Board: Joe Akerman of the Retired Greyhound Trust 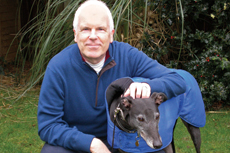 Joe Akerman's trustee role brings together
two long-term interests: accountancy and greyhounds. He is a trustee of the Retired Greyhound Trust (based in Worcester Park, south-west London) and chair of its finance committee. He is retired, having worked for more than 30 years in finance and audit management, including for a local authority.

"I first went to the track as a teenager," he says. "In my 20s and 30s I owned greyhounds. Later I have kept them as pets. Now I have more time and I can give something back by helping to find homes for the dogs. I know a lot of people don't agree with racing greyhounds, but the dogs are well looked after."

He is not alone in his passion: the board also includes a greyhound trainer, a vet and a representative from a bookmaker. "When you're a trustee, you tend to share a common interest with others," he says.

When the charity wanted to strengthen its financial governance in 2010, its chair approached Akerman because of his financial expertise. "Animal welfare charities is a crowded market," he says. "But the RGT is the largest single-breed animal charity in the country. So it was important that we professionalised our approach."

Recently the charity has expanded its activities to include taking greyhounds into young offenders institutes, so that the young people can gain qualifications in looking after dogs.

Last year he was able to commit 15 days to the charity. He says other volunteers give a lot more than that, but adds: "If you can give any time at all to board duties, don't feel you should give more than you are comfortable with. You might be able to devote more time later.

It's a serious responsibility: you must keep yourself informed. But go into it enthusiastically, and pat yourself on the back."

Careers Governance A Place On The Board Animals
Tweet