What’s the campaign about? 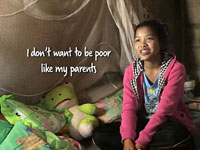 The charity has unveiled an interactive advert on a bus stop on Oxford Street. The Clear Channel screen uses facial recognition software with a HD camera to determine whether it is a man or woman standing in front of the screen. Passers-by can use a touch screen to opt in to view the advert and find out more about Plan’s work to help some of the world’s poorest girls. It shows different content to women and girls. Men and boys are denied the choice to view the full content in order to highlight the fact that women and girls across the world are denied choices and opportunities on a daily basis due to poverty and discrimination.

What does the advertisement show?

The 40-second Choices for Girls advert showcases three 13-year-old girls, Jasmine from the UK, Bintou  from Mali and Sur from Thailand. The girls' voices are intercut with everyday footage of their lives revealing the three teens’ hopes and dreams and highlighting the choices many girls are denied in developing countries.

How is the charity promoting it?

A dedicated campaign hashtag #choicesforgirls has been set up on Twitter, while the charity is promoting it on its Facebook channel. The video is also available to view on Plan’s webiste (choicesforgirls.org.uk) and on YouTube.

This campaign is ground-breaking because amalgamating facial recognition, touch screen and sound has never been used as part of a UK advertising campaign before. The advert has received coverage in countless media outlets and shows how charities are competing with brands to launch the most dynamic campaigns.