The power of endorsement can work wonders for charities, but how do you recruit and manage celebrities? Gemma O'Reilly finds out

It can be almost be almost impossible to find a celebrity to take an interest in a small charity, according to Georgina Dolan, a manager at the Nottingham-based training charity Rumbles. "Small charities don't have the resources or knowledge to bombard agents or hunt for contact details of celebrities," she says.

Add to that the plethora of celebrities to choose from, and the risk that your chosen star might misbehave, and celebrity endorsements can seem more trouble than they are worth.

But charities shouldn't be dissuaded. "Celebrities can be incredibly powerful," says Amy MacLaren, associate director, campaigning, at PR firm Colman Getty. "Think back to Joanna Lumley and the Gurkha campaign. It's a brilliant example of a celebrity figurehead with credibility boosting public awareness about an issue."

With this in mind, Third Sector caught up with those in the know to get advice on how a charity can go about getting its own celebrity ambassador.

Research, research and then more research is the most important factor when choosing a celebrity to partner with, says Rachel Burkitt, the celebrity development manager at Breast Cancer Campaign. She says it's vital to have a celebrity who is credible and relevant to the charity.

Burkitt's team conducts daily research by scouring the media to see which celebrities have been speaking about having experience of breast cancer. "When the singer Linda Nolan spoke about her experience of breast cancer, the story of her personal journey was very powerful and helped hit home the message that raising funds for research is vital," Burkitt says. It might not always be possible to find a celebrity who has personal experience of a particular cause, but there are other ways of securing their involvement.

Gordon Valance, director of Against Breast Cancer, says the charity recruited Julie Cowell, mother of the music mogul Simon Cowell, by tracking down a nurse four years after she had treated Julie and asking her to make an introduction. With Julie on board, A-lister Simon usually goes along to events too. 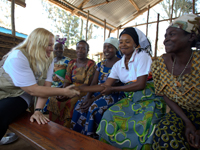 Although it's tempting to enlist the help of every possible celebrity in a quest for more column inches, the key is that it should not feel tokenistic, says Sally Clarke, campaign manager at the international aid charity Merlin.

Merlin approached the psychologist Pamela Stephenson, wife of the comedian Billy Connelly and a contestant on the current series of Strictly Come Dancing, to ask her to visit health facilities dealing with sexual and gender-based violence in the Democratic Republic of Congo.

"We are a small organisation and can't get big-name celebrities, so instead we go for the professionals - and Pamela is a health worker," says Clarke. "Media coverage is never guaranteed, so we always want someone on board who will resonate with supporters and be credible."

If charities are struggling to find celebrities who have a direct link to the charity themselves or through a family member, a little imagination is necessary.

The National Osteoporosis Society works with the Strictly Come Dancing judge Craig Revel Horwood, who does not suffer from the condition himself but promotes dance as a way of avoiding osteoporosis.

The partnership is an interesting example of how charities can find less obvious links by thinking about risk factors or preventions and finding a relevant celebrity for these instead.

It might be a charity's dream to sign up Angelina Jolie or Elton John, but looking ahead to see who is going to be the next big thing can be a way of securing a star-in-the-making - someone who perhaps has more time to devote to a charity and is more willing to build their profile with good work. "I've taken to reading OK! and Hello to find out who's in vogue at the moment," says Valance. "Someone who is going to be popular and might want to work with us."

Time and attention must also be given to crisis planning before signing up a high-profile ambassador (see panel, below). "Choose wisely by doing a simple risk assessment of the likelihood of a crisis and the impact on the charity before engaging a specific celebrity," advises Neil Bayley, a director at the PR agency Porter Novelli.

Once a celebrity has been selected, the next step is to find his or her agent and get in touch by email, explaining why the charity wants that particular star's involvement.

Personalised requests are considered the best approach if you want to secure celebrity support. Susan Mearns, celebrity coordinator at the development charity ActionAid, says: "If you show that you have thought about that particular celebrity and any links or relevance they might have, or ask about their interests, they are more likely to take notice of your request."

Burkitt says charities also need to consider what they will want the celebrity to do, whether that's speaking at an event, attending a photocall, fronting a campaign or something else entirely. However, charities should be wary of scaring off the celebrity by expecting too much too soon at the beginning of a partnership, Dawson says.

Finally, once a charity has got one celebrity on board, it should encourage him or her to enlist high-profile friends to help too. But it should ensure that it doesn't make the celebs feel exploited for their little black books.

- "I agreed to help the National Osteoporosis Society because I have a personal connection through my mother. The more charities I can help to bring things to life the better" - Craig Revel Horwood, Judge, Strictly Come Dancing

- "I help charities that I have a personal interest in. We live in a celebrity culture and having celebrities on board can help a charity" - Miriam Margolyes, Actress who campaigns for ActionAid

Every charity needs a crisis management or escalation policy to determine who deals with a situation and acts as the spokesperson, says Colman Getty's Amy MacLaren.

When you sign celebrities up, agree with them what your reaction would be in a crisis, so they know what to expect. "If there is a crisis, treat every incident in isolation," says Andrew Bloch, co-founder of Frank PR, whose agency works with Beatbullying. "Sometimes there can be pressure from the media to react quickly, but don't succumb.

"Take your time and act responsibly and with integrity."

There may even be a way of turning a negative situation into a positive communication message, he adds. "For example, if a celebrity is pictured smoking and is representing a non-smoking charity, maybe you can use it to show how hard it can be to quit," Bloch says.

Don't be afraid to drop celebrities if their actions conflict with the charity's interests and reputation. In January this year, Beatbullying found itself in the media spotlight when it dropped hip-hop star Dappy for making threats to someone who had sent a text to a radio show. "Sometimes you have to step away," says Sherry Adhami, director of communications at Beatbullying. "It was incredibly unfortunate and was a silly thing for him to do. When partnering with a celebrity, it is important to weigh up the benefits and negatives."