All quiet on the Westminster front

We've moved from the big society to the shared society, but apart from this there are few sector-related initiatives on offer. Stephen Cook reports

Amid the turmoil of Brexit, you might not have expected charities to feature in the pronouncements so far of Theresa May's eight-month-old government. You might even have expected the Conservatives to steer clear of the sector for a while, given the recent criticism of fundraising and the disappointing legacy of the big society.

But the Prime Minister plunged in and opened this year with a speech – delivered, to make a point, at the Charity Commission's annual public meeting – announcing what she called the "shared society", in which both government and voluntary organisations should play a part in tackling the injustice and social division she has often referred to.

The speech was preceded last October by the appointment – generally welcomed by the sector – of Charlotte Lawson as May's special adviser on civil society: Lawson formerly worked at the Centre for Social Justice, the think tank co-founded by the former Cabinet minister Iain Duncan Smith, where – she says on LinkedIn – she researched "how businesses and the social sector could enhance their social impact, enabled by government".

So far, sector leaders say they are encouraged by the notion of the shared society, in particular by its apparent emphasis on the sector and government working together: one of their criticisms of the big society was that it appeared to mean the withdrawal of government from social problems, leaving communities and volunteers to tackle them on their own.

At the same time, they are frustrated by the lack of detail about what the shared society might mean in practice: in her January speech, May pledged government action on housing, industrial strategy, education and mental health, and "creating an environment in which our charities and social enterprises can thrive"; she also announced that the charity Mind would take part in an initiative with industry to tackle mental ill-health. But her descriptions of the shared society were more general and rhetorical. Ensuring everyone had the chance to share in wealth and opportunity started, the Prime Minister said, by building a society focused on responsibilities to one another: "It's a society that respects the bonds that we share as a union of people and nations. The bonds of family, community, citizenship and strong institutions.

"It is by tackling the injustice and unfairness that drive us apart, and by nurturing the responsibilities of citizenship, that we can build that shared society and make it the bedrock of a stronger and fairer Britain that truly does work for everyone." Asked for more detail, the Office for Civil Society added that the shared society was "one where we harness the power of charities and social enterprises to deliver social reform". No 10 declined a request for an interview with Lawson.

More generally, there is a feeling among the five sector leaders interviewed for this article that little new thinking on sector policy has emerged from government or opposition parties in recent years. The OCS, recently moved from the Cabinet Office to the Department for Culture, Media and Sport, continues to develop the National Citizen Service, promote social investment and social impact bonds, and run the £20m Local Sustainability Fund, which will run out in June. To these familiar themes was added in December the Public Services Programme, designed to make it easier for small charities to deliver public services; apart from that, the OCS mentions its support for Local Charities Day, a forthcoming simplified process for charitable companies and community interest companies to convert into charitable incorporated organisations, and its sponsorship of the Law Commission's project on simplifying charity law. The Dormant Assets Commission has also just reported on how, if legislation is brought in next year, an extra £1bn or more could be released for good causes in the following years.

Meanwhile, at the Cabinet Office, there is no word on whether and when it will implement the recommendations of Lord Hodgson, who was asked by the government to review the lobbying act, to amend it so that it catches only activities by charities "intended" – as opposed to "reasonably regarded as intended" – to influence voting. There is also no sign of implementation of the 2015 Conservative manifesto pledge to allow all employees three days of paid volunteering a year.

There is a comparable lack of fresh proposals from the Labour Party as well: its shadow minister for civil society and young people, Steve Reed, says it's too early to be specific, given that the next election is more than three years away (see Profile, below). But he thinks disillusion with top-down politics has produced a threat to democracy from right-wing populism, and that civil society has a fundamental role in remaking politics.

"We need to bring professionals and resources together with people who are at the sharp end in communities," he says. "It gives communities the sense that they can control what is happening to them, that they are not victims but can be powerful and self-reliant – that instead of being locked out, they have a way in."

Of the current state of sector initiatives, Andrew O'Brien, head of policy at the Charity Finance Group, concludes: "There are no early signs that May's government will be a bold, reforming one for charities. So far it's hard to identify an ideology or reason for the shared society beyond a post-Brexit concern that society is more divided than it used to be. It might just be that the main idea is to present Theresa May as a unifying force. And at the moment the government has a monopoly on charity policy because no one else is putting much into it."

Sir Stuart Etherington, chief executive of the National Council for Voluntary Organisations, says the National Citizen Service and social investment are now the principal OCS programmes, using significant resources. Social investment would benefit from restructuring, he says, because it is proving too expensive for the sector to use and is unlikely to expand much in its present form.

"With the big society, the sector didn't try to define it, and we shouldn't miss that trick again. We have a responsibility, along with others and Julia Unwin's inquiry into the future of the voluntary sector, to engage with this agenda. But there's no policy document as yet. It's a blank canvas, so we might as well get the brushes out."

I think we should continue to do what we do and if the shared society falls in line with it, then fine

But Barney Mynott, head of public affairs at the local charity umbrella group Navca, cautions against getting drawn in: "I think we should continue to do what we do, and if the shared society falls in line with it, then fine.

"But we should be wary about changing what we do to suit the political mood. Governments and fashions in policy come and go, and the danger is that, instead of rising with them, we fall with them."

He thinks that, given the paucity of fresh sector policy at the top level, charities would do well to concentrate on relationships with individual government departments and the NHS, where he sees an increasing awareness of the role the sector can play in influencing programmes and delivering services.

Jay Kennedy, director of policy at the Directory of Social Change, concurs: "Brexit and the chaos in Labour have pushed the sector even further down the agenda, and the sector might be better off pursuing other initiatives than trying to influence the government. The Charity Commission and the Fundraising Regulator will be more likely to be doing things that affect the sector."

Overall, however, sector leaders seem relieved that the Prime Minister has shown herself to be alert to the potential of the voluntary sector, even though her interest is perceived by some as mainly pragmatic, locally based and focused on particular interests such as anti-slavery and some women's issues.

Vicky Browning, chief executive of the chief executives body Acevo, says: "People I talk to say it really feels as if, under May, there's a very different attitude to and relationship with the sector, and that the government seems more willing to engage.

"Charlotte Lawson is a good addition: she is a more direct conduit between the sector and the PM. She's at every meeting, talking energetically with the sector, and still seems to be in listening and planning mode. But we have to wait and see. I get the sense they want to work up something more concrete before making a song and dance about it." 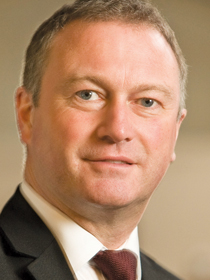 The government has made "a coordinated attempt to undermine the third sector" ever since Labour left office in 2010, according to Steve Reed (left), who took over as the shadow minister for civil society and young people in November.

"They see the sector as innately left-wing and want to silence it," he says. Examples he cites are the lobbying act, the "destructive" language used by ministers over chief executive pay and fundraising, and the halving of central government funding of local councils, which have therefore had to slash their funding of charities and voluntary organisations.

He also thinks the government fights shy of devolving power and has not thought through its idea of the shared society, which he says has no one to voice it. "The big society was an opportunity thrown away: it was a chance to make services accountable to people, but it just came down to replacing professionals with volunteers.

"The shared society faces the same questions, but every time this government goes near the new politics, it veers away because it's jealous of its own power and doesn't want to give any of it away."

But Reed has not opposed the government's expansion of the National Citizen Service, which is in the process of being put on a statutory footing, or the tightening of Charity Commission and fundraising regulation. The recent OCS initiative to improve the commissioning of services from smaller charities should go much further, he thinks.

In general, Reed wants to apply to national government his past experience leading Lambeth Council in south London, which was styled the first cooperative council because of its attempts to devolve power, involve local people in decision-making and make services more accountable to the community.

"When I've talked to Jeremy Corbyn, he's very excited about it because it's what he calls community politics, which is something he's always cared about. Tom Watson, the deputy leader, has asked me to think creatively about the challenges we face, so I don't think I'm swimming against the tide."

Labour's civil society brief was vacant for more than four months after Reed's predecessor, Anna Turley, resigned on the grounds that Corbyn was not providing the kind of strong, forward-looking leadership that could displace the Conservatives from government.

Reed, elected MP for Croydon North in a 2012 by-election, resigned as shadow local government minister at the same time as Turley, but returned after Corbyn gained an increased majority in the leadership election in October. He said at the time that his commitment to the party outweighed the question of leadership.