Rachel Aldighieri: What does the future of fundraising look like?

Charities must work together to raise the bar and contribute to a more sustainable future for the sector as a whole, writes the managing director at the Direct Marketing Association

The third sector, and fundraising in particular, has faced an increasing need to evolve over the last 18 months. Not just following the media exposes of 2015, but to ensure the industry is able to meet the needs of today’s society. The explosion of new technology and availability of data has fundamentally changed the way charities can communicate with their supporters, allowing fundraisers and marketers in the sector to communicate on a one-to-one basis with supporters like never before.

However, with this data and technology-driven approach comes the need for much greater awareness of how to ensure responsible and successful practices are being used. But what does this future actually look like and how can third sector organisations get there?  The DMA’s Future of Fundraising Taskforce held a workshop with a range of key industry stakeholders to focus on how to lead the sector’s response to the challenges laid out in the ‘Securing the future of one-to-one Fundraising’ whitepaper released earlier this year. 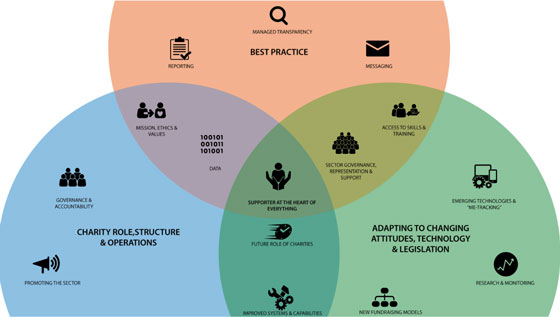 The result was a collection of 15 key visions and aims, identified by a wide representation of sector stakeholders, which outline what a future operating model for the industry should look like. These were grouped into three overlapping areas (see diagram above) to help define a charity’s role, structure and operations, best practices, and how the sector can adapt to changing attitudes, technology and legislation.

The overwhelming theme for the future health of the sector became clear during the workshop: ‘Putting the supporter at the heart of everything’. The goal was to move the third sector as a whole towards fundraising and marketing activity that is driven by a lifetime single customer view and even the potential for supporters to be able to co-manage their charity preferences in the future too. Ultimately, allowing for a higher level of understanding and empowerment among supporters that will driver greater long-term engagement. This customer-centred approach can also be applied across the three core areas that these recommendations cover, which include setting best practice for the sector, adapting to an ever-changing world, and the future role of charities and how they will be run.

As Melanie Howard, Co-Founder and Chair of the Future Foundation and Co-Chair of the DMA’s Fundraising Taskforce, puts it: "Whether you’re a public, private or third sector business, the principle of putting your ‘customer’ first should be a founding principle and essential for the long term health of the organisation. For the third sector in particular, the social importance of our underlying objectives requires that we must take the long view and build goodwill by treating all stakeholders with fairness and respect at all points of contact. This will cultivate relationships that will benefit both the charity and its supporters and most importantly, the beneficiaries."

Charities and the third sector as a whole do great work, that’s what they are there to do. But to do that work they need to invest in the right people, skills and tools to do the job. This model was created to be an ideal for the third sector to work towards, rather than a checklist to do tomorrow. The group was conscious to make these attainable and realistic goals, with tangible actions included for each section to act as a guide for charities on the journey to a more sustainable fundraising future. Throughout all the discussions I’ve had with people working across the sector, it has become very clear that everyone understands that evolution is non-negotiable and already well under way.

Rachel Aldighieri is managing director at the Direct Marketing Association