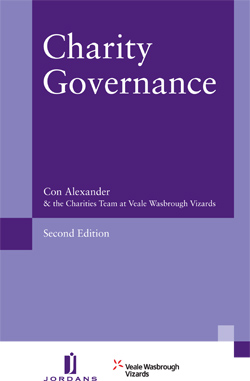 The second edition of Charity Governance, by Con Alexander and the charities team of the law firm Veale Wasbrough Vizards, sets out the fundamentals of charity law, the responsibilities of the Charity Commission, the role of trustees and seven key governance areas, namely assets, investment, tax, borrowing, trading, reporting and restructuring.

A key balance in such a tome will always be between user-friendliness on the one hand and technical detail on the other. The balance is weighted towards the former, applying the sort of language that Alexander et al might use at meetings with clients rather than with fellow members of the Charity Law Association. This is not to say that everything in the book makes immediate sense on first reading, but then it's hard to imagine such a thing ever really being possible in the world of charity law.

The emphasis is on the practice of governance, with decision-making nudges, checklists of steps to be taken in a particular scenario and detail on how a particular issue relates to different legal structures. Technical matters are approached in terms of their practical application, with the aim of explaining the fundamentals as simply as possible.

Detailed but clear definitions of matters such as classes of investment and forms of taxation will be welcomed by readers who are forever hearing technical phrases thrown about in meetings with the assumption that everyone must know what they mean.

Pleasingly, the book has a larger font size and more spacious layout than is commonly found in legal handbooks – doubtless something to do with the fact that it is also available as an e-book; but it helps to make Charity Governance unintimidating and accessible.

Charity Governance, by Con Alexander and others, published by Jordan, £85 (hardback) or £76.50 (electronic)