My Husband, My Lover reads like a love poem one way, but read in reverse tells the story of living with a violent partner

Refuge has created a reversible poem for Valentine’s Day that highlights controlling behaviour and domestic violence.

Called My Husband, My Lover, the reversible poem features lines that when read one way tell of a whirlwind romance, but read in reverse chronicle the reality of living with a partner who has turned violent. Reversed lines include:

"When we’re in bed
His weight
Above
He is punching
My ‘cute little face’
What does he love about me?" 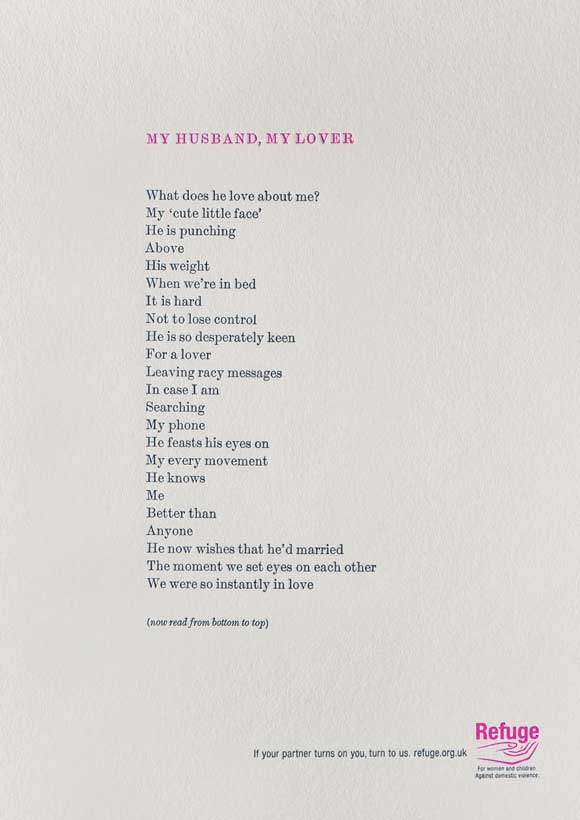 My Husband, My Lover follows in the footsteps of Refuge's hugely successful Christmas campaign in which three festive-themed reversible poems were released by the domestic violence charity.

That campaign garnered much media attention and became one of Third Sector’s most popular tweets of the year.

Refuge is using the poem to raise awareness of the "hidden, insidious nature of domestic violence" and to let victims know that they can turn to it for support. Sandra Horley, chief executive of Refuge, urged victims to contact Refuge for help.

"For many, Valentine’s Day is a time to enjoy being with a partner. However, thousands of women and children will be spending this Valentine’s Day, like every other day of the year, in fear and terror," she said.

"Refuge is urging anyone who is experiencing abuse today, or any day of the year, to reach out and access support. Remember, you are not alone."