Review of the year: a testing time for the sector

For many charities, the year has been shaped by difficult economic conditions and controversial government policies. David Ainsworth rounds up the key events and memorable stories 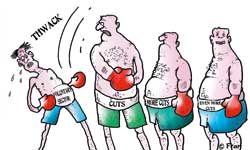 After the comprehensive spending review in October 2010, the cuts began in earnest in 2011. The sector quangos Capacitybuilders and the Commission for the Compact closed in March and the Office for Civil Society's strategic partners programme was pruned from £12.2m last year to £4m this year and will cease in 2014. A Third Sector survey suggested that councils were chopping a fifth from voluntary sector budgets.

There was a 5 per cent drop in the size of the workforce in the year to the end of June, ending more than a decade of continuous growth, according to the NCVO. It also estimated that charities would lose £2.8bn in public sector income over the next five years (from a total of £12.8bn in 2007/08). The Budget brought the end of transitional relief on Gift Aid donations, which - coupled with the rise in VAT to 20 per cent in January - was predicted to cost the sector an extra £250m a year.

Nick Hurd, the Minister for Civil Society, launched various funds to help charities, including the £107m Transition Fund, the Community First match fund and Transforming Local Infrastructure. But OCS spending on the sector is due to fall by 61 per cent to £74m over the next three years.

The Work Programme, run by the Department for Work and Pensions, was billed as a way for the sector to increase its share of government contracts. But it did less well than expected, criticism is rife and political arguments continue.

CHARITY COMMISSION ALSO TAKES IT ON THE CHIN 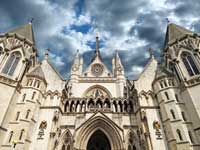 Dame Suzi Leather, chair of the Charity Commission, said in September that 2011 was like "staring into a force nine gale". At the commission, this meant a cut in its budget from £29.3m to £21.3m over four years and the axing of 125 out of nearly 400 jobs.

It also had a tough time in the courts when the Upper Tribunal ruled that key sections of its guidance on public benefit provided by fee-charging schools were wrong. It had to withdraw those sections and start rewriting them, consoling itself with the assertion that the tribunal had upheld its approach on all the key legal principles.

The equally knotty problem of the public benefit provided by about 1,400 benevolent funds was passed by the commission, perhaps wisely, to the charity tribunal for a ruling in the new year. In Northern Ireland, meanwhile, they're arguing about whether charity law in the province will require religious charities to prove their public benefit at all.

In November, the government appointed Lord Hodgson, the cheery Conservative peer, to conduct the review of the Charities Act 2006, but took the precaution of asking Stephen Lloyd of law firm Bates Wells & Braithwaite to act as legal adviser. Subjects to be covered include the licensing of public charitable collections, public benefit, the remit of the charity tribunal, charity merger provisions and whether there should be a UK-wide definition of the concept of charity.

The term appeared to reach its sell-by date in 2011: ministers used it less, while commentators and opposition politicians continued to mock it. But programmes billed as part of the big society agenda rolled into action, including the scheme to train 5,000 community organisers and pilot projects for the National Citizen Service for 16-year-olds. Both were accused of replicating - and taking funding from - existing services that were already working well.

After a long genesis under both Labour and coalition governments, the £600m social lender Big Society Capital finally came into being and will start making loans in 2012. Francis Maude, minister for the Cabinet Office, also launched his plan to spin out public services into mutuals, hoping that a million public sector workers would be employed in spin-outs by 2015.

HARDER TO RAISE IT

There was some good news for charities in the Budget: George Osborne announced that they would be able to claim Gift Aid on £5,000 of donations without paperwork, and promised a 10 per cent reduction in inheritance tax for anyone leaving 10 per cent of their estate to charity.

The Giving White Paper proposed a range of measures to encourage giving and philanthropy and make the UK a more generous society. It included the announcement that people would be able to give to charity next year through all the country's Link-enabled cash machines.

Perhaps a bigger boost - to small charities in particular - was JustTextGiving, a joint venture by Vodafone and JustGiving to enable anyone to give to charity by text message, free of charge. Meanwhile, there was a prolonged wrangle about the plan to phase out cheques by 2018, which ended with capitulation by the Payments Council and a smile on the face of the Institute of Fundraising.

But 2011 also saw the publication in Charity Market Monitor of figures for donations to the 500 biggest fundraising charities in 2009/10, and they were down by £70m - 1.1 per cent - on the previous year. The verdict of the report's author, Cathy Pharoah: "I fear the pain for charities is far from over."

The tight conditions also made fundraising more competitive, not least on the doorstep, where charity bag collections began to look like a free-for-all. Another divisive issue was the launch of the Health Lottery by Richard Desmond - he of the Daily Express and Television X. It attracted special criticism from Sir Stephen Bubb of Acevo, but charities in general seemed quite keen on a potential new cash stream. 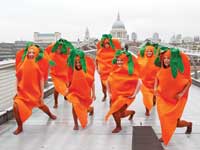 Everybody knows that eating carrots improves your ability to see in the dark, don't they? So when Fight for Sight, which funds research into eye diseases, held a 15-mile fundraising night walk, the obvious way to promote it was to dress a bunch of volunteers as carrots and picture them on the Millennium Bridge. The walk went well, with 200 people taking part. At least they didn't bite off more than they could chew. 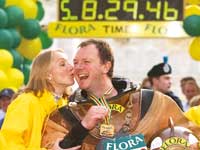 Lloyd Scott - Having completed the London Marathon in a diving suit, as Indiana Jones, as St George towing a dragon and as Brian the Snail from the Magic Roundabout, he announced he was knackered after 20 remedial operations and would be doing one final marathon in 2012.

Amanda McLean - The chief executive of the Institute of Fundraising beat a path to the door in March after only four months, saying the hours weren't working out for her and she wasn't seeing enough of her primary school-age children.

Irene Khan - She received a £533,000 golden handshake after the human rights organisation Amnesty International decided her services as secretary general were no longer required. Her deputy, Kate Gilmore, received a mere £325,000.

Lord Wei - Famed for baffling audiences with gnomic utterances about how the big society was like a coral reef, he stepped down as a government adviser in May.

QUOTE OF THE YEAR

"There is a junkyard where phrases such as 'the third way', 'cones hotline' and 'back to basics' are buried. 'Big society' should join them there" - Paul Flynn Labour MP for Newport West, at a meeting of the Public Administration Select Committee taking evidence from Francis Maude, Minister for the Cabinet Office 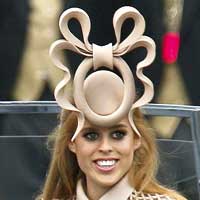 STAT OF THE YEAR

£81,100 - The amount paid at auction for the hat worn by Princess Beatrice to the royal wedding. The cash went to Unicef and Children in Crisis.

MOST READ ON THIRDSECTOR.CO.UK IN 2011

Amanda McLean quits Institute of Fundraising after four months The chief executive steps down with immediate effect from an "amazing but overwhelming job" to spend more time with her family. (March)