Some simple methods taken from the advertising industry can help you to increase donations, writes our guest columnist

What do you think is the most effective advertising campaign ever?

All sensible selections, but I’d pick De Beers ahead of them all. The long-running diamond campaign is built on a psychological insight that you can still apply to your fundraising today.

Most couples who are getting engaged unthinkingly plump for a diamond ring. But there’s nothing natural about that decision – after all, in the 1930s only 10 per cent of engagement rings were diamond.

That changed with a marketing campaign linking the durability of the stone with the eternal nature of true love, summed up by the strapline "A diamond is forever".

But persuading people to buy diamonds wasn’t enough for De Beers: it wanted to push up the prices too, so it suggested that consumers invest a month’s salary in a ring.

This seemingly laughable tactic worked because of a psychological principle called anchoring. This is the idea that if you mention a number, however irrelevant, at the beginning of a consumer’s deliberations, they’ll be swayed by it.

The original evidence for anchoring came from two psychologists, Amos Tversky and Daniel Kahneman, who recruited participants to spin a wheel of fortune. The wheel was rigged so that it stopped either on the number 10 or 65.

Once the wheel came to a halt the spinners had to estimate what proportion of members of the United Nations were African countries. Those exposed to the number 65 estimated 45 per cent on average, whereas those who saw the number 10 estimated 25 per cent.

Even though the number on the wheel had no relevance to the answer, it influenced the participants by setting a starting point for their calculations.

There are three fundraising applications.

First, most charities offer three donation levels. You can apply anchoring by increasing the highest donation request beyond the level you’d expect anyone to donate at. The purpose isn’t to boost donations at that level but to set an anchor that makes the middle option appear better value.

You can see a high anchor being used in the image below. Oxfam’s highest ask is for £42 a month, a level only a tiny minority could afford. However, the anchor serves to make the middle donation of £20 a month look more reasonable. 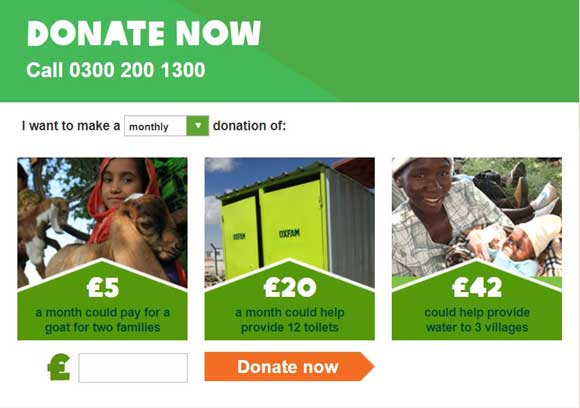 Second, consider changing the order in which you show your suggested donation levels. A simple tweak can better harness the bias of anchoring.

In 2012 the psychologists Suk, Lee and Lichtenstein ran an eight-week experiment in a bar. They gave drinkers a list of differently priced beers and asked them to select one. The twist in the experiment was that sometimes the menu ordered the beers from high to low price while on other occasions it was ordered low to high. When drinkers saw high prices first they spent nearly 5 per cent more on average. The first price that drinkers encountered acted as an anchor. You can test this by ordering your donation requests from high to low (highest on the left).

Finally, for my book The Choice Factory I undertook some research into overconfidence. I surveyed 521 people about how generous they believed they were. The results were conclusive: 64 per cent believed that they were more generous than their peers.

That’s an opportunity for you. State the average donation level on your fundraising page and then set the middle option a pound or two higher. Unless donors give that higher amount, how can they continue to think of themselves as being generous?

What about De Beers?

Anchoring worked wonders for De Beers. Its US sales, accounting for inflation, increased nineteen-fold between 1939 and 1979. In fact, the approach was so successful that in the 1980s it began suggesting that people pay two months’ salary for a ring. Again, that sum seemed a little bit much, but the number acted as the anchor and people spent more.

But it’s not just diamond sellers who can benefit from anchoring. You can too. Try it today.

Richard Shotton is the author of The Choice Factory, a book on applying behavioural science to advertising