Shelter has filmed an appeal video featuring Rich Fulcher of The Mighty Boosh as an unwanted Santa Claus trying to bring an early Christmas to morning commuters on the tube. 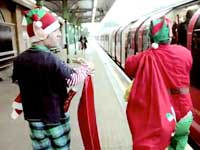 Fulcher and his Christmas companions Mrs Claus, Rudolph and the elves get on the tube at different stops and proceed to decorate the carriage with tinsel and a tree, giving out mince pies and presents to sceptical commuters.

What is the charity hoping to achieve?

The Santa Claus video is part of a wider emergency campaign from Shelter that was launched on 9 November.

Other parts of the campaign include a letter written by the comedian Billy Connolly that was distributed to commuters outside London’s Liverpool Street station on 14 December, highlighting the numbers of people who are homeless in and around Liverpool Street. The emergency campaign also includes a nationwide poster campaign.

Who’s behind the campaign?

The campaign has been created in partnership with the creative marketing agency Don’t Panic.

This video uses humour to convey a serious message. The film is fun to watch and the punchline at the end is a powerful way to get across the charity's campaign message. The video is short, which will keep viewers' attention, and will appeal to people wanting to share fun videos on social networks this Christmas, promoting further awareness of the campaign.