The Bank of Mum and Dad campaign, launched this week, aims to show how much first-time buyers are relying on their parents for help with buying property.

The campaign warns that relying on the "Bank of Mum and Dad" to help people get homes of their own is not sustainable, and the charity is calling on the government to address the country’s affordable homes shortage to help all those affected by the housing crisis. 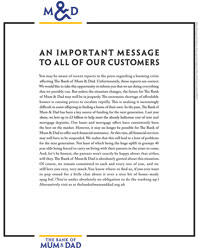 The charity has designed a web page that informs "customers" that the Bank of Mum and Dad might "no longer be able to provide financial assistance". It includes a calculator that people can use to work out how long it would take them to save up enough money to buy a house.

The charity has been promoting the campaign on its Twitter feed using the hashtags #bankofmumanddad and #pricedout. It also has information on its Facebook page.

The charity has backed the campaign launch with a media push, including a full-page advert in The Times.

Why is the charity doing it?

Research by the charity has found that parents are paying out an estimated £2bn a year to help their children get on the property ladder as more and more young people are priced out of home ownership. The charity says that the Bank of Mum and Dad is close to breaking point.

This campaign has already gathered attention on social media, with commentators praising the charity for its clever positioning. By mocking up the message to appear as though it is an official announcement from a bank, it ensures that it stands out for readers in The Times and visitors to the charity's website.