With the year we’ve all had, Christmas campaigns and appeals are more important than ever- but, it's likely to be a challenge for charities as many normal routes are not going to be available this festive season, such as on street collections or carol singing.

That means you’re going to need to be resourceful to come up with campaigns that are going to fit with ever-changing alert levels – and digital and virtual activities could be the solution.

Here, are six campaign ideas for you to consider running this Christmas:

1 Virtual carol service There’s nothing better at getting people into the festive spirit than carols. But to keep everyone safe, carol concerts will need to look a little bit different this year. Still packed with all the hymns, readings and more, this year’s services can be live-streamed instead. Your supporters will be able to cosy up at home with their nearest and dearest and tune in to raise vital funds for your charity.

2 Virtual Santa run In light of current and changing restrictions, many charities have decided to make their annual Santa Fun Run event virtual this year. Going virtual has some great advantages. Your supporters can choose when to take part. They might like to take part early in December to get into that festive spirit, or they may like to run off the turkey and potatoes by going for a dash during the Crimbo Limbo between Christmas and New Year.

And the online fundraising platform Enthuse can help by creating some healthy competition by sharing distances completed (full integration with the running app, Strava); keeping tabs on sponsorship totals and if you are running an event on one day, like a 5K, supporters can let their friends and family know when they are getting started and broadcast it live on their fundraising page. This will help them to get some virtual cheers and virtual trophies as well
as those all important donations as they get over the finish line.

3 Online auctions An online auction is quick and easy to set up. Bidding is done online, and bidders are immediately notified via a pop up and email of their bid status and proxy bidding can be enabled to allow those participating to bid up to their maximum automatically.

Another benefit of running an online auction is that bidding doesn’t need to be limited to those attending an event – it can be opened to a much wider audience. Items can be previewed and bid on over an extended period of time, and can also be added at any time during the period the auction is running.

While your supporters are clearing out items from their homes, ask them to think about how their old unused possessions could make a difference in someone else’s life. If they have toys, furniture, books, kitchenware or clothes in good condition that you no longer use, ask them to consider donating or they could sell the items online and donate the proceeds.

5 Cards from Santa A great way to get the kids excited about Christmas is to send them a personalised card from you know who in the North Pole. This one from the NSPCC is a great example.You can choose from eight templated letters, including ‘Baby’s First Christmas, ‘The Elf Cup Final’, ‘Santa’s Toy Workshop’ – and there’s even one for pets!

You can then personalise your Letter from Santa with your child’s name, age, and interest. The NSPCC has a £5 suggested donation per letter.

6 Emotive campaigns Campaigns that hit emotionally can have added impact during the Christmas period as people’s thoughts turn to loved ones and those less fortunate than themselves. In the past, we’ve seen campaigns use social media and many other creative digital techniques to showcase charity causes and land a hard-hitting message.

Some of the best in recent years include The Dogs Trust’s ‘A dog is for life, not just Christmas’. The charity issued YouTube videos and made use of comedy to highlight the responsibility of owning a pet. Using funny relationship break up scenarios, the animal charity used digital to get its message out – reducing the number of dogs given up.

Another powerful campaign was Shelter’s 'Disappearing houses', which depicted an ordinary family exposed after their home had disappeared and aimed to show how quickly people can be made homeless. The message was aimed at those who may need Shelter’s help in the near future, as well as those who are currently homeless. 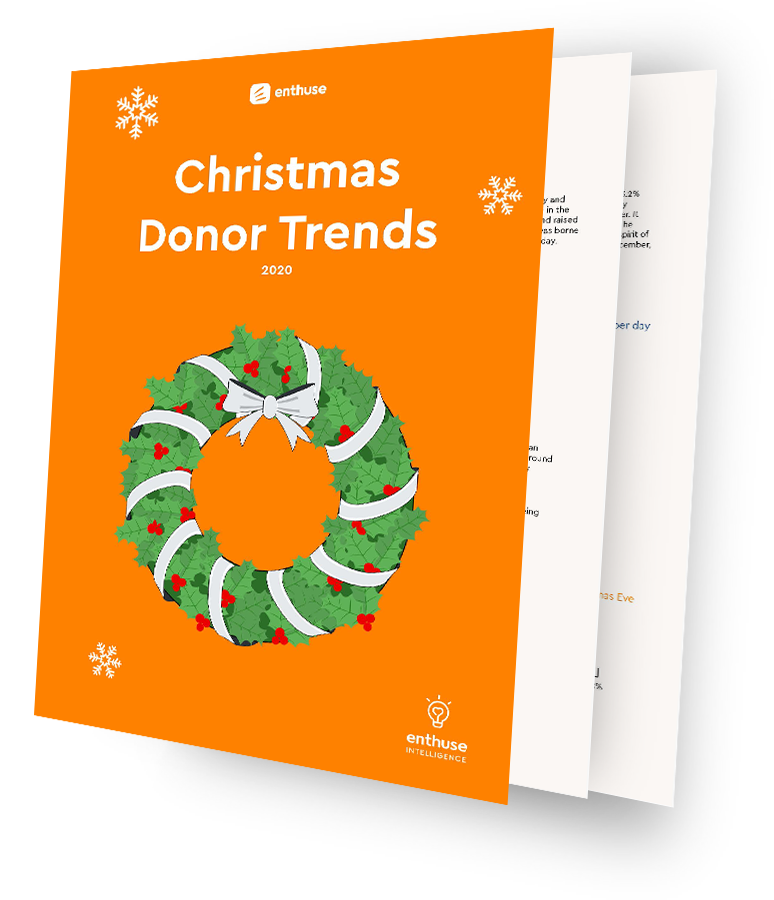 So once you have your digital/virtual Christmas campaign organised, when is the best time to run these campaigns? Is there a golden hour for year-end donations? When are people most likely to donate?

Enthuse answers all these questions in their recent Christmas Donor Trends report.

Download your copy here and discover the most relevant insights to succeed this festive season.