Social enterprise: Four that rose to the challenge of freedom

The government wants more public service providers to become independent of government. David Ainsworth talks to four organisations that have crossed the divide

In November last year, the Cabinet Office announced the Right to Provide, in which staff in public sector bodies will be given the right to set up their services as independent third sector organisations. A £10m fund has been set up to help them make the transition.

The initiative comes in the wake of the Labour government's policy Right to Request, under which about 60 health organisations have become independent. The Social Enterprise Coalition says one in 10 primary care trusts now plans to set up a social enterprise.

Right to Provide has already attracted hundreds of expressions of interest, according to the Office for Civil Society. Matt Jarratt, communications and membership manager at Social Enterprise London, which has produced a guide on the conversion process, says the latest initiative has struck a chord.

"We have had approaches from a surprisingly large number of bodies," he says. "Some of these want to develop an entire strategy for a whole local council. Others are looking at independence only for a small team."

Ceri Jones, head of policy at the Social Enterprise Coalition, would welcome more social enterprises but warns that the transition is not easy.

"It's important to get top-down and bottom-up commitment from staff, and also to ensure that service users understand and agree that they will get a better service," she says. "Then there are practical issues. How do you handle VAT and pensions? Who will provide the business planning, HR and IT services that were previously offered by the council or the primary care trust?"

Here, four organisations that have made the transition say why they think life in the voluntary sector is better - even if the transition isn't easy. 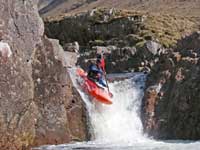 When Argyll and Bute Council's three-year grant from the Big Lottery Fund to provide outdoor pursuits for children and adults expired in 2006, it set up a social enterprise called Stramash to continue the service. The council provided transitional funding for two years, but Stramash is moving towards a model in which most income is earned commercially.

Niall Urquhart, chief executive of Stramash, says the decision to create a social enterprise was taken of necessity. But he says it has worked well, not least because most of the charity's £400,000 income would not be accessible if it were still part of the local authority.

"We would have left the council sooner if we'd known what it offered," says Urquhart. "We have more freedom under this model.

"But there were a lot of problems we hadn't anticipated and we had to learn a lot of new skills.

"The biggest challenge was replacing back-office support, such as health and safety, HR and IT, which the council had provided. We didn't realise how much work it did until it stopped doing it."

Urquhart cautions against local authorities choosing this path as a top-down, cost-saving measure. "It takes a lot of effort to set up, and the people involved need to be willing to do it," he says.

Oldham Community Leisure became independent from Oldham Metropolitan Borough Council in 2002 after a decision by councillors, staff and trade unions. It now operates with a subsidy from the council covering 30 per cent of its costs. The rest it generates itself.

"When this organisation was run by the council, the staff were extremely unhappy," says Ian Kendall, chief executive of OCL. "They felt is was nothing but cut, cut, cut. They were sold the idea that if the trust became independent, they would be in charge of their own destinies."

The organisation is now a community benefit society, which allows staff and service users to become members and shareholders.

Kendall says that in the nine years since OCL left the public sector the effect on staff has been positive - morale has improved, and the sickness rate has declined from 6.8 per cent in 2002 to 4 per cent this year.

"By the end of this year, our cost to the council will be the same as in 2002, but the organisation's income has tripled," he says. Income now stands at £6.7m a year.

"We have retained a close relationship with the council: two councillors sit on our board, and it works very effectively."

One problem the newly independent organisation encountered was creating a strategic vision. But Kendall says the benefits far outweigh the drawbacks.

"We're now able to respond more quickly to customers' needs, and the lack of bureaucracy has made it easier to take the most effective path," he says. "I think any organisation that followed our path would show improved results."

Your Healthcare, formerly part of NHS Kingston in Surrey, became an independent community interest company in August last year. It provides the front-line services of the local primary care trust, has an annual turnover of £25m and employs 500 staff, including nurses, therapists, management and support staff.

"The process took about three years and was an enormous amount of work," says Siobhan Clarke, managing director of Your Healthcare. "We took the decision before the right to request. As a result, a lot of bureaucracy was involved. But it was worth it in the long run."

Early on, she says, the key was to ensure that staff and service users were behind the concept.

"The board carried out an independent assessment to make sure we would be financially, clinically and managerially viable," she says. "A lot of different proposals were considered, but a social enterprise was seen as the best answer."

However, Clarke says the spin-out process was stymied by red tape for a long time.

"We developed a five-year business plan, and we spent six months as a shadow organisation within the NHS, checking everything worked," she says. "We thought we would get the go-ahead, but the decision to spin us out was continually delayed."

The advantages, she says, include keeping surpluses and a reduction in bureaucracy, which makes the organisation more nimble. "Recently, for example, we thought it would be an advantage to invite a GP practice to share one of our buildings. We asked them, and they said 'yes'. It cost £8,000 and took two months. Before that, it would have taken numerous committees and would have had to be approved by any number of people."

"I reckon I have saved two days a week in time I used to spend on bureaucracy."

"The risk is still borne by the NHS," she says. "We've not been saddled with those commitments. We've had the best of both worlds."

Living Well was set up by Hammersmith and Fulham Primary Care Trust in west London to provide counselling to HIV patients. But as demand for services increased, independence became an attractive proposition.

"We looked at various options and a social enterprise was clearly the answer," says James Miller, director of Living Well, which is now a £900,000-a-year operation. "We chose the community interest company model partly because it gives more flexibility, but also because it gave us a board of directors, which has been extremely useful."

The organisation began by consulting staff. "There will always be resistance to any change, so we needed to be sure everyone involved understood what we wanted to do," says Miller.

Business planning, profitability studies, arranging insurance and finding providers for back-office functions, such as HR, IT and finance, all had to be considered.

Miller says staff members have had to broaden their skills and become more aware of costs, although VAT has been less of a problem than had been anticipated. The organisation cannot reclaim VAT as it could in the public sector, so it is included in contracts instead.

Six months on, Miller says, the risk has paid off. "For the first three months, I might not have been so sure," he says. "But now I can say that the effort was worth it."