How social media can be used for learning

Do you think Facebook, Twitter and the whole social networking buzz is just something for fundraisers and marketing staff? Think again. Joe Lepper reports on how training is the new social networking frontier for the voluntary sector

Whenever people talk about how charities can tap into the social networking phenomena that are Facebook and Twitter, mentions of their fundraising and marketing potential are rarely far behind.

Fundraisers and communications teams tend to hog the social media limelight, but charity training departments have been quietly embracing the social networking revolution too.

According to Martin Baker, managing director of the Charity Learning Consortium, many charities are starting to reap the benefits of using social networks to train their staff. The primary driving force behind this trend is money, he says. Social networks can be used by voluntary organisations to train staff without the expense of classrooms and tutors.

"Charities have always had to think creatively, but never more so than in the current climate," says Baker. "It makes sense to use social networking in this way. It's just such a cost-effective option."

But saving money is only one of several benefits, says Laura Overton, the managing director of Towards Maturity, a training firm that recently surveyed 400 organisations - including 40 charities - about their use of technology in training. "Saving time is another benefit," she says. "We found those who took courses that used online technology and social media learnt the same as those taking more traditional training sessions, but in 27 per cent less time.

"There is also greater opportunity for peer-to-peer learning among trainees. It's much more informal and gives trainees more freedom to ask questions at times that suit them. Sometimes a new hot topic emerges and the training department can react to it by designing courses around that particular area."

Although the benefits are clear and common, the types of social media being used for training by charities vary greatly. Some are using software such as the Open Society Institute's Karl - a tool designed for not-for-profit organisations that lets users upload blogs and create Wikipedia-type web pages that users develop over time.

Others use online forums or tools such as Yammer, which is similar to Twitter in that it involves short questions and answers, but instead is housed in an organisation's in-house IT system, rather than on the web.

More public social networks, including Facebook, can be used to create online groups where trainees can discuss issues. They are easy to set up, but are rarer because of the lack of privacy. Baker warns that the privacy issue might make this approach unpopular with staff and suggests that charities consult their employees to find out what they would feel comfortable using.

"It's easy to forget that one-fifth of the population has never been online," he says. "So one of the challenges for integrating social media for learning is making sure that what you are offering is what people want."

Barnardo's is one charity that is trying to incorporate social media into its training. Lisa Johnson, the assistant director of learning and communications in the charity's information services department, says the charity is already using e-learning but feels social media can supplement this.

"From talking to staff, we are looking at something that is more secure and not public like Twitter," she says. "That way staff can feel more comfortable using it."

But privacy is not the only concern, because training departments can find themselves in conflict with fundraising and marketing departments over social media skills and software.

"Some marketing departments like to control the messages that they are putting out, including those on social media," Baker says. "Harnessing social media for learning might not be such an obvious idea."

To overcome this, Overton suggests training, IT, fundraising and marketing teams meet regularly to find out "how technology can be used to benefit all of the organisation".

She also points to the key characteristics of successful social media training identified by her firm's research. This shows that the vital elements for success are having a clear strategy for training and career progression, an assertive IT department that meets regularly with other departments, good consultation with staff and the ability to prove the value of using social media in terms of cost-savings and effectiveness.

"These methods sound simple, but very few organisations can say that they have all of them in place," she adds.

The healthcare think tank is exploring several approaches to using social media for training, including Facebook groups and online training seminars, or 'webinars'.

This month, the charity is holding a trial run of its webinars as part of its Safer Births training programme for health professionals.

Using Webex software, those taking part will be able to share information through Power Point presentations, share a desktop and use video links. Webex also has options for peer-to-peer discussion through social media techniques, including text messaging.

Katie Mantell, head of new media at The King's Fund, says: "There are real advantages, such as saving money and time that would have been spent travelling to a seminar. Those taking part can dip in and out if needed."

If the trial goes well, the charity's leadership development team will begin to look into using these social media-focused webinars to help train NHS managers.

The Safer Births programme also has a password-protected forum and a student doctor training scheme that has a Facebook group where trainees can ask questions related to what they've been learning.

"Social media training can never replace face-to-face training," Mantell says. "But it is something that can complement it."

Using social media in training has obvious advantages for Oxfam's institutional grant team, which has staff in about 60 countries.

The charity already uses Elluminate's webinar e-learning system and is building up a "collaborative community" to include in its training. This will allow trainees to share blogs and create Wikis, explains Cynan Houghton, humanitarian funding capacity building coordinator at the charity.

"It helps to keep the discussion alive and adds to the learning experience," Houghton says. "We often keep these going for a couple of months after a session.

"We selected this software because it's simple to use. If someone can send an email, they are capable of using this."

Although the global team is used to communicating through email, Houghton says, some staff took to it quickly and others did not.

"It can be a challenge to convince them that the benefit of discussing issues collaboratively far outweighs the extra time it takes to get involved in this form of training," he says.

VSO UK's training for volunteers who are due to work overseas for the first time has a strong emphasis on social media. 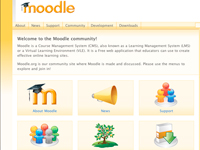 Its course mixes face-to-face seminars with online discussions and activities that are used between training sessions, provided on the Moodle Platform.

The cost of setting up the online element of the course was kept low by sending a lone trainer on a course who then trained colleagues how to use the system.

Nancy Ouma, the assessment and training manager at VSO UK, says the social media part of the course saves money by reducing the time and cost involved in hiring venues for face-to-face sessions.

"We looked at the course and thought about the elements that could work for us using social media," she says.

"We consulted widely with existing volunteers and what emerged is that there are other benefits. It gives volunteers a chance to gain an introduction at a more gentle pace, allowing the trainer and trainees to find out more about their own experiences and how this can be used in the course."

Those taking part also end up developing their own ground rules.

"This involves things you would expect, such as not being rude, but in one course they decided on a rule of not criticising spelling mistakes," Ouma adds.