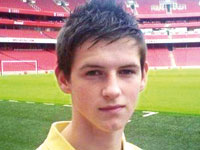 Five years ago this week, Brooke Kinsella's half-brother Ben (right) was fatally stabbed in a north London street. Sixteen-year-old Ben had just finished school and had been expected to achieve top grades when he was attacked and killed by a gang of three young people.

The murder pushed the former EastEnders actor into the spotlight and has set her on course to become one of the highest-profile charity campaigners in the UK.

Since Ben's death, she and her family have set up the Ben Kinsella Trust, which aims to promote knife-crime awareness and the devastating effect it can have on families.

She has also headed a government review of schemes that prevent young people carrying and using knives and two years ago was made an MBE for her campaigning work.

Earlier this year, she became the official ambassador for the charity Victim Support, which helped to look after her family when Ben was killed. In an interview with The Sun newspaper in March, Kinsella talked about how it had taken many years for her and her family to come terms with Ben's death and how a Victim Support officer called William had helped them get through their darkest days.

Javed Khan, chief executive of Victim Support, says: "Brooke's determination in the face of extreme personal tragedy is a testament to her. She's a recognisable and credible face with exceptional media skills. She also understands the role and value of volunteers, and she knows the impact that crime can have on victims and what they are going through."

This is the first time Third Sector has made this BMAC Special Award, intended to honour exceptional initiatives by individuals and charities.