The survey, which is carried out annually in partnership with Birdsong Charity Consulting and is in its eleventh year, found improvements in almost all areas relating to staff satisfaction compared with 12 months ago.

Of the 46 areas probed by the questionnaire, 16 showed an improvement on last year and only one was worse than in 2016. The rest remained broadly the same.

The survey found that 47 per cent of respondents said they felt morale in their organisation was high: the highest level recorded since 2008 and a five percentage-point increase on last year.

The lowest level recorded over the past 11 years was in 2008 when just 29 per cent of respondents said morale in their organisation was high. 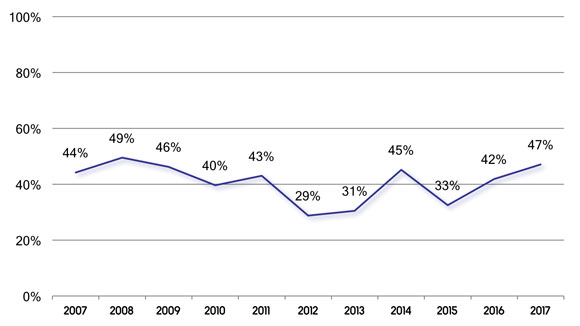 Slightly more than half of respondents, 51 per cent, said they felt secure in their jobs, up by four percentage points from last year and the highest level since a question on the subject was first included in the study in 2009.

Research found that 70 per cent of respondents said their manager was a good person to work for, up from 57 per cent in 2012.

There were increases of between seven and 11 percentage points in the proportion of respondents who said they felt appreciated, thought their views were listened to by management and did not feel under pressure to work long hours compared with 2016.

But there were some negative long-term trends in areas including workload and internal processes.

The survey found that just 35 per cent of respondents said their charities’ procedures helped them to carry out their roles effectively, down from 48 per cent in 2010.

"This data suggests that a significant proportion of charities are not taking sufficient action to adjust workloads, to curtail projects or, simply, to stop doing some things," says the report, produced by Birdsong.

"Staff are being put under greater pressure in the hope that the organisation will be able to ‘muddle through’."

The survey also showed sharp falls in the proportion of those who were happy with the training or development they receive, which fell from 62 per cent 10 years ago to 47 per cent this year.

Only 36 per cent of respondents said they were happy with the personal development opportunities at their charities, compared with 47 per cent in 2007.

This year’s survey was completed in the spring by 245 people working for more than 110 UK charities.